I started writing about our local restaurant at the end of the block. But then, like much writing, it developed a direction of its own. And soon I found that I was looking through Michael Meyersfeld’s portfolio and his list of exhibitions. Why? You might ask.

Hanging on the back wall of our great neighbourhood eatery, Dolci Café at Lancaster Village, there is an intriguing large black and white photograph of Luciana in a wedding dress in a restaurant kitchen. Luciana, she of the flamboyant disposition and chef-extraordinaire at Dolci, is the  mother of Jackie Righi-Boyd, who with her husband Clayton, owns Dolci Café.  (See previous post.) It transpires that this work is by the well-known South African portrait, fine art and advertising photographer, Michael Meyersfeld. 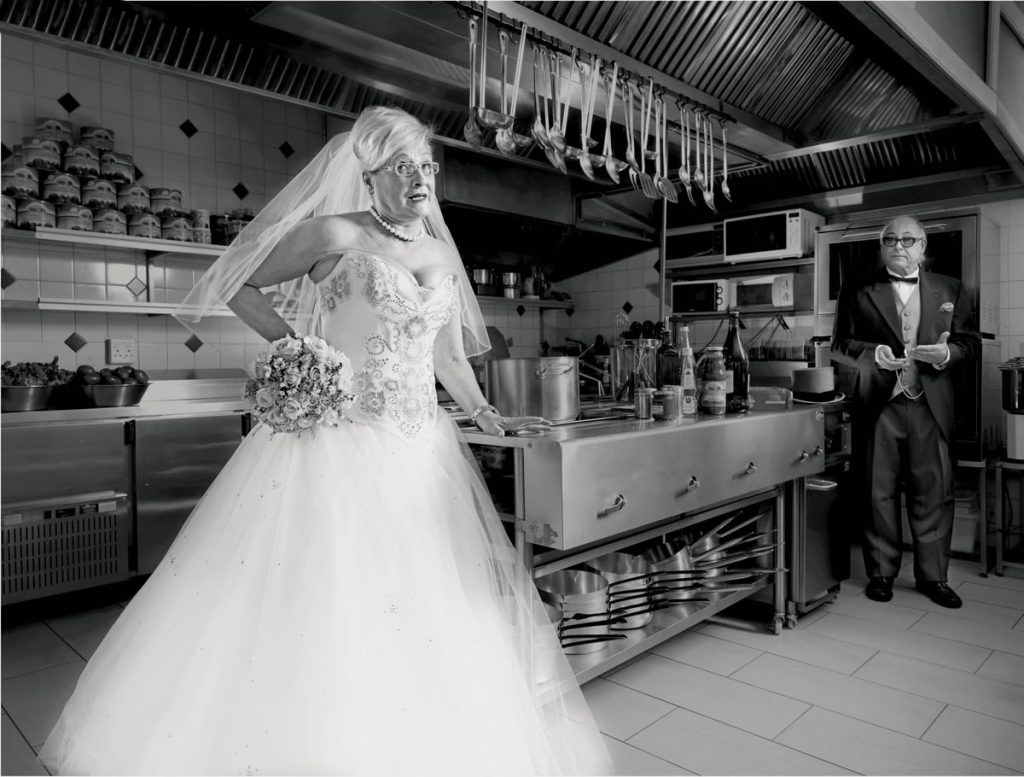 Voluptuous in her strapless wedding dress, the bride is depicted frozen in mid-movement – left arm forward palm of the hand to the ground, right arm drawn back holding the posy of bridal flowers.  She looks out of the pictorial space with eyes upturned to the right and mouth slightly open. The viewer’s eyes sweep back on a diagonal to the back right of the pictorial space along the steel counter, the stacks of pan handles, the row of spoons hanging from the hooks, the ceiling rafters. Here a man, [Michael Meyersfeld] presumably the groom, in morning suit with top hat on the prep counter, is looking at her. His lips seem pursed.  Is he disapproving?  Time is relevant.  He has his fob watch in his right hand. Is she late?  Is she taking a deep breath?  He gestures questioningly to her with his left hand. Has she changed her mind? Where is the rest of the bridal party?  Is this who she is turning to?  Her focus is not on the groom. This is not your average young bridal couple.  The expected order of things has been overturned.

This image is part of a body of 12 works entitled Women Undone in which Meyersfeld examines the changing role of women in the workplace. So all 12 works are about change, overturning the status quo, creating the unexpected and of course radically shifting gender relations. In all 12 works the compositions are carefully constructed, details are crisp and relevant, and the poses are meticulously orchestrated. All this adds to a drama and tension and the viewer is sucked in to the enigmatic narrative like a theatrical performance. Meyersfeld says ‘Each image can perhaps be compared to a “still” from a movie, except that this one image must contain all the emotions that would perhaps require several minutes of film. The “audience” can sit back and indulge in all the emotions presented without fear of being trapped in reality. “The dead man lying on the stage floor with a knife in his back does get up when the curtain closes.” ‘

Shown at the Obert Gallery Melrose Arch in 2010, the exhibition Life Staged also included 3 other bodies of work: 12 Naked Men; Guests at the Troyeville Hotel; and Urban Disquiet.

For more on Meyersfeld  And by good fortune there is currently a Meyersfeld exhibition entitled Notional  (where he moves into abstraction) at the Henry George Gallery, 45 6th St, Parkhurst ; Mon & Sat 9.30am to 1pm | Tue to Fri 9.30am to 4pm. Until 16th November.