For three years running, over a May weekend, the Johannesburg Development Agency has organized Walk My Jozi #JoziWalks, a series of sponsored walking tours in partnership with local community activists, tourism entrepreneurs, walking-tour operators and heritage specialists. 2018 saw me exploring Orlando East with His and Hers Jams and Diepsloot with Lucky Nkahli of #BikesMustRise, while last year I joined a walking tour of Alex with the charming and engaging Harry Nakeng. I’m only now loading the post as 2019 was a hectic and very “distracted’ year for me with endless weeks taken up with local community issues. But time over the slightly quieter festive period, enabled me to sort through the hundreds of unlabelled photos taken on my various Jozi excursions over the last year.

Harry Nakeng, our local guide, welcomed us at the Alex Mall, on the far east bank . It’s interesting that a good map of Alex seems impossible to find. After our brief introductory talk from Harry we moved to an outlook area to get a sense of location and an overview (quite literally of Alex.)

The origins of Alex

But first some context of Alex. It seems there are lots of inaccuracies which get repeated in the popular potted histories of Alex, not least of all being the origin of the name. One the many books on Joburg which sits on my bookshelf waiting to be read from cover to cover is Bonner and Nietfagodien’s excellent history of Alex. So I turned to it with great interest to check on some of the seeming contradictions in popular accounts.  The meticulously researched and footnoted history has revealed that: In 1905 Herbert B. Papenfus (a lawyer and farmer) bought the farm Cyferfontein 2 where Alex now stands. He divided the property into 338 lots, two parks and a square and started trying to sell lots to white buyers. Although a few lots sold, it was clearly not going to take off, so in 1911 he got approval to redivide the land into 2308 lots (144 X 82 ft /44 X 25m) with the intentions of selling to coloured and Africans. Because the 1913 Land act had not yet come into being, they were still able to own the land outright.

The plot thickens – Papenfus’s wife’s name was Ethel ….. not Alexandra!

The new township was known as Alexandra. It is generally believed that it was named after Papenfus’s wife or daughter. But here comes the “goss” …. None of H.B Papenfus’ immediate female relatives was called Alexandra. H.B’s cousin or brother, Stephanus Papenfus also had no female relatives named Alexandra.  H.B Papenfus was killed in a car accident in 1937 and in his will left a paltry £20,000 to his family. His prime asset, the Alexandra Township Company, he left to his former typist Mrs. Gordon with whom he had a child 30 years before. Bonner and Nieftagodien pose the question: “The gender of this child is not recorded, but if she were a girl, who would give the odds on her name not being Alexandra?” (page 21)

Alex has always had a fraught, complex and violent history and was always in danger of being completely removed from the map, requiring buildings to be destroyed and residents to be relocated. But it has also always been closely associated with political resistance and has survived various tumultuous events like the bus boycotts of the 1940s and ’50s which successfully broke the intended penny increase in bus fares (for 6 months in 1940 all residents walked the some 15km to and town); the resistance against Bantu education in the 1950s (but these protests did not bring success); the outcry against the inhumane conditions in single sex hostel in the early 1970s; the death toll of 19 people during the student resistance in June 1976;  the “Six Day War” of 1986 when 40 people were killed; the resentment against those who moved into houses built in 1999 on the Far East bank for the All Africa games athletes; and the disappointment when there was little improvement in housing, employment and income at least 3 years into the President Mbeki’s R1,3 billion Alexandra Renewal Project [ARP] announced in 2001. Alex continues to be under-resourced with high levels of unemployment but despite all this it retains its sense of identity and as Bonner and Nieftagodein write “the community spirit of the people of Alexandria, expressed in a fiercely loyal love of their township home, has repeatedly triumphed and endured”. (Back cover of “Alexandra A HISTORY”.

And it was this that we experienced when we walked different parts of Alex with Harry,and spoke to various residents.  Listen here to Harry’s words when it came to say goodbye.

So enough words … here are some pics of our walk: 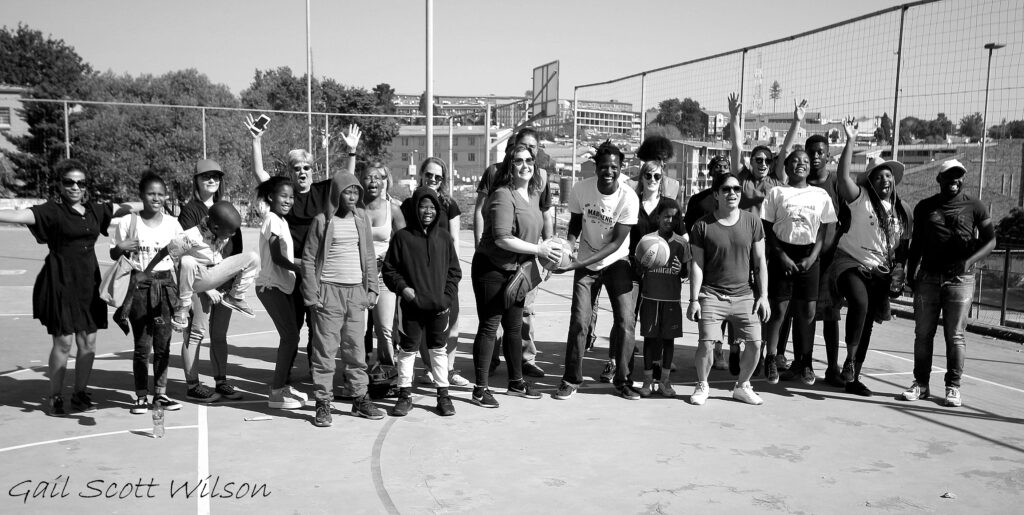 My battery died on the day, so thanks to Gail Wilson and Sam Varney for sharing their photos with me.