Eskom, a South African parastatal, is the country’s main supplier of electricity. For reasons too depressing and lengthy to go into here, there is a serious national shortage of power supply. So for some 12 years now South Africa has been subjected to what it terms ‘load shedding’, which are planned power outages aimed to relieve overload of the national grid (as opposed to random power outages due to a fault). The  country is divided into Blocks on the electrical grid and the severity of the load shedding is measured in stages. Over the last 12 years, while there has been little progress in sorting out the systemic problems of maladministration and poor governance, corruption, ongoing lack of maintenance and slow progress in increasing supply capacity, there has however been a slight improvement in the planning and implementation of load shedding. So instead of one area being load shed for the same 4 hours every 2nd evening from 6 pm to 10 pm for example, a rotational system was set up  with a very complicated grid structure to be read across the day of the month, the stage of load shedding and the time of the load shedding slot.  A very successful app was also developed called Eskom Se Push (a wonderful example of the irreverent irony of South African humour – with its pun on the Afrikaans word poes. (I’ll leave the Urban Dictionary to explain further!). 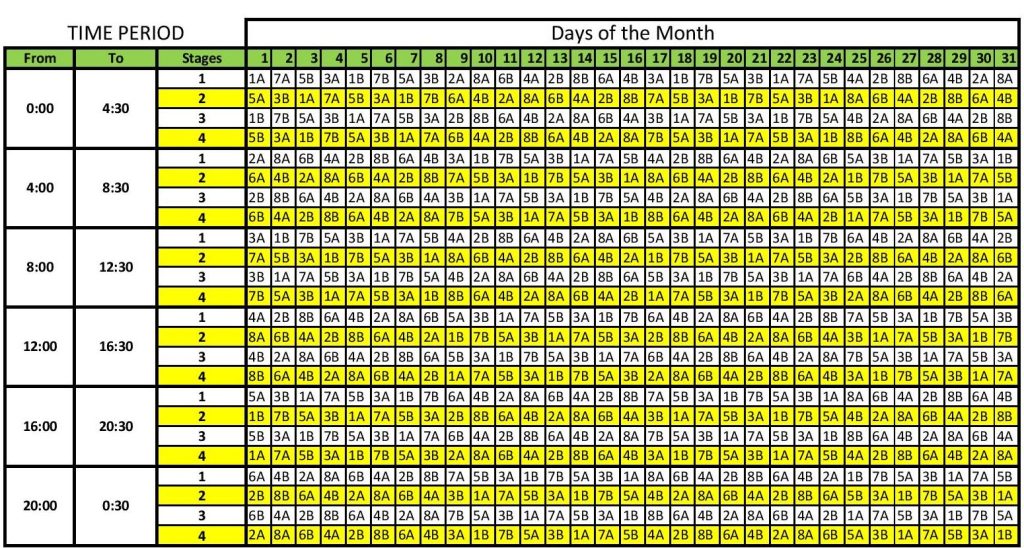 Even if I say it myself – I am a grid guru. So I navigated my way around these arcane complexities with relative ease compared to lesser mortals on the grid-reading scale.  And produced a simplified version of the block relevant to us at Liz at Lancaster (ie Block 2A) for ease of reference both for Team Lancaster as well as guests staying at the guesthouse.

Liz at Lancaster is geared for load shedding.

Guests are notified in advance of any load shedding so that they can charge cell phones and laptops, ensure the emergency lights we provide are to hand and make a thermos of hot water.  Our internet (50 meg high speed fibre optic) is on a UPS so we can all continue to work without interruption, watch movies on Ipads, and communicate on What’s App.

Remember cricket as explained to a foreigner?

As I said, Lancaster Ave has always been on Block 2A. That is …. until the last few days. For 2 days in a row SOME of us on the street had power outages of over 8 hours a day (NOT all of us … that would make for uninteresting and unchallenging times in this moment of global pandemic, lockdown and economic crisis). And these power outages did not match the scheduled times for block 2A. Then lo and behold … it transpires that some of us match the load shedding schedule of block 1A. Yes … after lots of further communication with our local City Councillor, it turns out City Power (the municipal department which controls the power that comes in off the national grid from Eskom) has changed some properties (only temporarily mind you) from block 2A to block 1A (with no notification to consumers). This has to do with some complexity of  “back feeding” to deal with various faults. HOWEVER,  in increasing the load on Block 1A, (only temporary remember), said Block 1A gets overloaded at switch-back-on-time, so come the end of the 4 hour period of no power, when it’s “lights-on” time again, the entire Block 1A section collapses. So now said Block 1A (which still thinks it is Block 2A) goes back into power outage after a spilt second moment of hope. But the thot plickens and the narrative gains pace, because as block 1A (which thinks it’s Block 2A) loses all power yet again because of switch-on overload, so Block 2A (which is still Block 2A and knows who it is) goes into scheduled 4 hour load shedding.

So now all on the street are powerless with a few on the street having no power because of load shedding: Block 2A who know who they are;  and most of us (newly and unknowingly transferred  to Block 1A) having no power because of a fault … But we don’t know who we are so we don’t know it’s a fault.  And then as if this is not enough… those in Block 2A who were load shed, post jubilantly on the street What’s App group after their scheduled 4 hours is up, that their power is “back on”, while those who have been off for 8 hours continue with no power.

And that is a perfect example of a total SNAFU!

One thought on “Geared for load shedding at Liz at Lancaster”