Guests who stayed at Liz at Lancaster recently visited Origins Museum and Sterkfontein out in the Cradle and came back full of excitement about our rich hominid history. I told them how I am constantly amazed at the opportunities we have in South Africa to explore our amazing past – both recent and since the beginning of early life on earth. And I starting telling them how 2016 was the year of the fossil for me! They were fascinated and asked me to write a blog on it … so. Jono from Ireland – here it is! 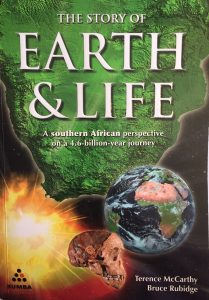 Mid 2016 I was privileged enough to tag onto a private tour of the dinosaur collection at Wits University with Professor Bruce Rubidge head of Evolutionary Studies Institute.  Several years ago a friend gave me Bruce’s amazing book co-authored with Terence McCarthy : The Story of Earth and Life A southern African perspective on a 4.6 –billion-year journey  Although I find it fascinating I think I understand some 20% of its contents … mostly the pictures! I felt somewhat vindicated at my ignorance when I read the summary of Bruce’s research area: Basal therapsid taxonomy and palaeobiology; stratigraphy and basin analysis.  I also cannot get my mind around deep time (billions of years ago .. when homo sapiens has only been around in Africa for some 200,000 years) – but I don’t think I am alone on this one. 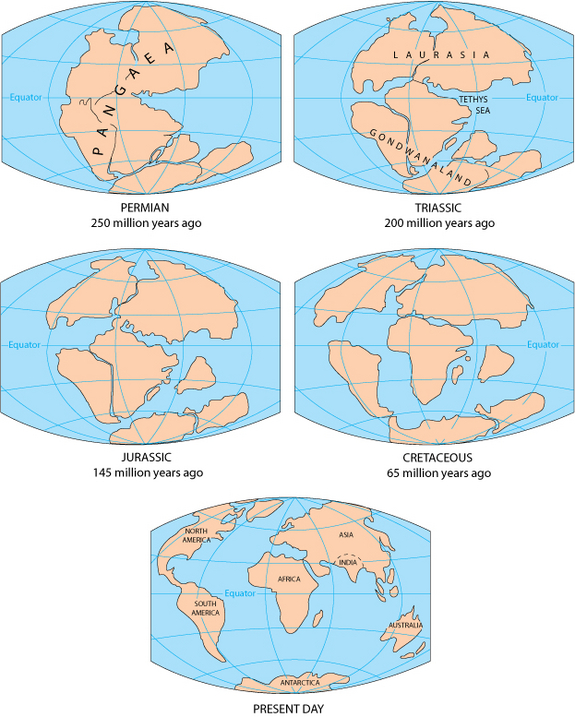 Plus I battle to conceptualize the shifts in geography from the world as one continent: Pangaea around 250 million years ago; to the splitting of Gondwana; to the final formation of anything that looked vaguely like South Africa’s coastline as it is today. And therapsids, cynodonts and sauropods add a whole other language.  I remember going to a workshop on language acquisition in early childhood development when my sons were at pre-school.  As parents we were introduced to a whole range of previously unknown dinosaur names and had to work through the process of remembering and pronouncing them. So my ‘deep time’ extends to recall of Diplodocus, Stegosaurus and Brachiosaurus, amongst others .. dredged up from 35 years ago! And then along came Jurassic Park and Tyrannosaurus Rex became an instant meme in popular discourse.

What is special about the Karoo?

Before getting to the tour of the labs and workspaces (including the new Phillip Tobias Primate and Hominid Laboratory), Bruce explained to us what it is that makes the Karoo so special.  Karoo rocks (known as the Karoo Supergroup) cover about two-thirds of the surface area of South Africa – from the Swartberg in the south to the Drakensberg in the north.  These are subdivided into a number of rock sequences as seen on the left laid down over millions of years (from 300 million years ago to 180 million years ago).  The Beaufort group of rocks began to be deposited around 265Ma [million years ago] when rivers drained into the shrinking inland Ecca Sea.  The Beaufort Group was followed by the Stormberg Group which includes the Molteno and the Elliott formations. This area also bore witness to 2 mass extinctions (in 252Ma and 200Ma) so it provides a unique record of changes in the biodiversity over time.   Fossils from all 3 groups of reptiles have been found in the Beaufort Group of the Karoo: 1)ancestors of tortoises; 2)therapsids which are the ancestors of mammals; and 3)ancestors of dinosaurs, birds, lizards, snakes & crocodiles.

But it is the dinosaurs that have most captured the popular imagination. Fossils of the first true dinosaurs have been found in the younger Elliot Formation. Even though around 180Ma a massive eruption of molten lava from the Drakensberg and the Maluti ended the 120 million years of the successive Karoo sedimentation, dinosaurs continued to exist until 65Ma when a meteor struck earth. It is thought that the resultant cloud affected food sources resulting in mass extinction. From this time onwards mammals became the dominant species.

From Reptiles to Mammals

Bruce also explained the uniqueness of the Karoo rock formation in terms of what it has revealed about evolutionary development over millennia. The Karoo is famous for its many therapsid (mammal-like-reptile) fossils which provide evidence of the evolutionary development from reptiles to mammals.  The most primitive (reptile-like) fossils have been found in the oldest rocks of the southern Beaufort group (ca 260-240Ma) while the therapsid fossils become more mammal-like through the successively ‘younger’ northern Karoo rocks,  with the earliest true mammals found in the uppermost Elliot formation in the eastern Free State in the foothills of the Drakensberg.

And most fascinating of all, Bruce explained the structural changes that occur in the evolution of therapsids to true mammals.  An early therapsid had no bony  palate but this evolved over time to a soft fleshy palate to a fully developed bony palate as in modern mammals. Similarly over time the 7 bones in the lower jaw of a therapsid, became only one – with 2 of them evolving into ear bones (the hammer and anvil). These changes occurred over 60 million years. I was completely amazed to hear that these same changes occur in utero in modern mammals. This apparently follows Haeckel’s Law which states that the embryonic development of an organism is a speeded-up reflection of its evolutionary history. How remarkable is that?

The oldest dinosaur eggs in the world

We were shown the archaeology and microscope lab; the micro-CT scanner and 3D printer; and virtual image processing lab; the fossil preparation and casting facilities; as well as the largest palaeobotany herbarium in the southern hemisphere. But to walk through rooms with tables of fossils that are some 250 million years old is the most surreal experience.

Most humbling and exhilarating of all was to see close-up 200 million year old dinosaur eggs – the oldest dinosaur embryos in the world. It was breathtaking. Discovered by James Kitching in 1976 at Rooidraai near Lesotho, it took 5 years for palaeontologists to remove the rock matrix and identify the 6 fossilized eggs as dinosaur embryos. Over 25 years later more research at the same site revealed two nearly complete embryonic skeletons of the dinosaur Massospondylus, a five-metre-long herbivore and part of the Sauropod group which included some of the largest animals ever to have lived on earth.

Further research was put on hold for another 2 decades because any physical examination of the tiny embryonic bones affixed forever in stone would have damaged them. However with new technology the beams of a very powerful CT scanner in a Synchrotron Radiation Facility in Grenoble can see through the rocks and image the bones inside in 3D.  So this wondrous clutch of eggs was taken over to France  in June 2016 where thousands of X-ray scans were performed.  It will take many months for the ESI team, headed by Dr Jonah Choiniere to process the data.

Sauropods – did their farts contribute to global warming?

In November I attended a fascinating talk given by Dr Choiniere at Orbit Jazz Club in Braamfontein as part of the Science and Cocktail lecture series. Amusing and accessible his topic was the Sauropod group of dinsosaurs (of which our 200 million year old embryonic eggs would have grown into a ‘small’ example of this group. The biggest Saurpod weighed 80 tons, and seeing an elephant weighs 6 tons and a T Rex 8 tons, this is one huge beast.  And Jonah dealt with questions such as: As herbivores how could they eat enough to sustain their huge size? How could they breathe with such long necks? How could they grow so quickly? And most compelling of all did their farts lead to global warming? In case you really want to know: Sauropods may have released more methane gas into the atmosphere than all modern sources combined which may have had an important effect on the Mesozoic climate. But methinks it did not happen quite as quickly as the climate change in the last half century.  It was the Sauropods who were the precursors of Theropods, the ancestors of birds (a relatively recent theory). Part of the Sauropods adaptation to being able to move their gargantuan weight, was to develop light bones and huge air sacs (which also enabled them to suck in sufficient air down their long log necks). How remarkable is it that this adaptation of such a massive terrestrial animal, could end up in a tiny flying creature like a sunbird? More on Theropods.

Also in November (I said 2016 was the year of the fossil), I visited another amazing fossil site although this was positively contemporary by comparison. The West Coast Fossil park is a fascinating 5 million year old site with a working (or ‘on-hold’) dig. Here, remains of extinct saber-toothed cats, short-necked giraffes, hunting hyenas and African bears were uncovered during phosphate mining in the Langebaan area of the Western Cape. Although palaeontologists and archaeolgists come from all over the world to dig here (each with his/her own small demarcated square), the National Heritage Resources Agency has, for the last 2 years delayed on granting the licence to continue digging this National Heritage site – hence it being an ‘on-hold’ dig.  We were given a delightful tour by an excellent young guide. However, I was a little confused as he kept talking about having so many examples of ‘Civet here’. I couldn’t work out why there should be so many civet, nor why they should be so huge. Until I saw the information diagram explaining that the extinct short necked-giraffe is in fact called a Sivathere!

There are plans to construct a large scale fossil museum which is sure to be a good tourist attraction. However there was something delightfully informal about the ability to walk the planks between the different sections of the dig, seeing technicians sorting fossilized amphibian bones into separate ice-cream containers and visiting the small low-key museum. There is also a charming little tearoom-cum-cafe. A find indeed!

So after all this I’ve added another site to my bucket list:  the Kitching Fossil Exploration Centre in that most favourite village of mine: Nieu Bethesda.  Started by Bruce Rubidge in 2005, there is a museum and guides trained at Wits ESI, who take you out into the field.

Now wouldn’t I be favourite granny if I found a dinosaur?