Several weeks ago I blogged about the importance of the development of entrepreneurs .   Here’s the story of but one.

We have many French-speaking guests come to stay at Liz at Lancaster, sent to us by AFS-decouverte, a company specializing in French tours through Southern Africa (thank you Yann).  Many of these visitors get collected from the airport and brought to our guesthouse in Craighall Park by Thomas, a French speaking tour guide who then guides them around Johannesburg and beyond. I’ve worked with several French speaking guides all of whom originally came from French speaking DRC (Congo) – Willy Kalala of mountziontours.co.za is one such.  So I made the assumption that Thomas too was from the Congo. But no – Thomas Mudau is a Venda speaking South African.

How a Venda man became a French tour guide

And so the fascinating story of Thomas’ path to entrepreneurship unfolded.   Schooled in Diepkloof Soweto at Mangwele Primary and then Madibane High School, he got his Matric certificate in 1992. Having no funds to go to University he got various temporary contract work such as packing shelves at Woolworths.

In 1997 he started afternoon adult classes at Alliance Française in Soweto (the Soweto branch was founded in 1983).  His fellow classmates were very varied – some wanting to learn French to go and study in France while others were guiding at Gold Reef City.  Some of these guides suggested that he too should think of becoming a guide at Gold Reef City.

Thanks to one of those serendipitous flukes of life, Gold Reef City were looking for somebody who could work with Venda school children coming to the site, as well as a guide with knowledge of French.  Thomas fitted the bill on both counts and so he was accepted as a trainee. 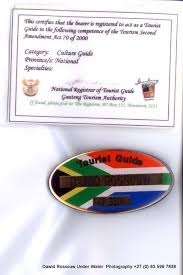 SA Tourism guide – for Soweto only.  (The SA Tourism qualification needs to be renewed every 2 years). In 2000 he was sent to Germany for 2 months, funded by the Nelson Mandela Children’s Fund. On his return he branched out as an independent guide often meeting and greeting tourists at the airport before taking them off to see the sights of Joburg.

At the airport he started to meet tour operators who are always in need of guides and it was here that he hooked up with several tour operators, including Yann Godivier of AFS-decouverte.  And so Thomas’ business continued to grow.  He became a qualified SA Tourism guide for 5 provinces, began taking tourists further afield to places like the Kruger Park, bought a house in Thembisa in 2002 and is a shining example of what can be achieved through hard work and perseverance.

I asked him if becoming a guide has been good for him and he said that although initially it was very very tough, it has all now paid off and he is very happy with ‘where he is at’ in his life.  Thomas can be reached on 082 963 4770.