Having not been to the Pilanesberg National Park for several years, I was lucky enough at the end of last year to visit twice in 3 months – in October – when it was still quite brown, dry and dusty and again in December when it was transformed into a rich, green, verdant landscape. And despite the differences, (or maybe because of them) I was struck yet again, by what a little gem this game park is.

THE BIG FIVE SO CLOSE TO JOHANESBURG

Proximity to Joburg is its first major plus.  It’s an easy two and a half hours from Liz at Lancaster Guesthouse. Plus the landscape is truly special as the reserve area is located in one of the largest alkaline volcanic complexes in the world so it is not only very beautiful but also geologically unusual. There are only two other known alkaline volcanoes in the world:  in Russia and in Greenland. (To be honest, I have NO idea what the significance of an ‘alkaline’ volcano is!)

GEOLOGICAL HISTORY OF THE PILANESBERG

The Pilanesberg volcano first erupted 2 million years ago and had its last eruption 1.2 million years ago. (Do the math as to how long it was active!)  Over time with the outpouring of lava, craters collapsed and rings of fractures occurred around the volcano. Magma squeezed into these fractures which resulted in rocks of different ages like ‘onion rings’.  Erosion over millions of years has stripped away the mountain leaving only these magma pipes that were located very deep below the volcano’s summit.  The accompanying diagram shows a cross section of one such magma pipe.  At its highest the volcano was 7000 meters tall.  For comparison, Everest is 8611 meters and Mount Kilimanjaro is 5895 meters.  But the highest peak in the Pilanesberg is now Matlhorwe which rises a mere 700 metres above the valleys.

The whole area is known as the Pilanesberg Alkaline Ring Complex (PARC) (seen above) which has some rare minerals and comprises 3 rings of hills with an outer diameter of 24 kilometers. On the outskirts of PARC sit many of South Africa’s platinum mines (with their dark history both pre 1994 and post). The satellite photo below shows the distinctive ring /circular structure of the PARC. 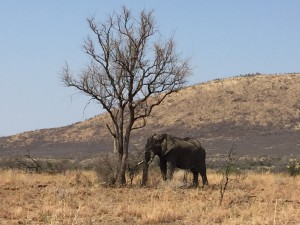 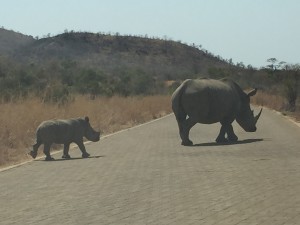 There is an amazing variety of game species and because of the open plains and low scrub there is excellent visibility for game-viewing.

The Pilanesberg was established in 1979 when it was fenced and Operation Genesis, (the name given to the programme to re-introduce long-vanished species), began. It is now incredibly well-stocked with all the ‘Big Five’, 15 species of antelope, plus cheetah, leopard, and wild dog.

Other predators include the African wild cat,caracal, serval, jackal, bat-eared fox, brown hyena and the nocturnal aardwolf. (There are no spotted hyena in the Pilanesberg as the environment is apparently too competitive for them to survive.)  There are over 7000 animals in an area comprising 55,000 hectares, with over 200 km of roads. You can either self-drive; take a drive on a lodge game-viewing vehicle; or arrange for a day-tour with a tour operator (see below).  Unlike in the Kruger National Park, all camps in the Pilanesberg (except for Tshukudu) are at the edge of the actual reserve. Visitors have to pay an entrance fee and keep the form and disc that is valid for the period of their stay.

SOCIAL HISTORY OF THE PILANESBERG

As with all land reserved for wild life, there is always a fraught history of human occupation and later displacement to make way for a park area.   Stone Age artefacts found in the Pilanesberg and surrounds is evidence that human beings have been here since the Middle Stone Age. During the Iron Age, ancestors of the Batswana and the Basotho occupied the area as cattle farmers and pastoralists who also worked copper and iron.  By the late 18th century large towns of 10,000 or more were established in the greater Pilanesberg area.  This settled urban way of life was disrupted during the Mfecane in the late 1820s, when Mzilikazi continued the widespread domination of various groups by his Ndebele clan.  The Voortrekkers in the mean time had come north to escape British Rule in the Cape and they joined with local Tswanas to rout Mzilikazi (who moved on north to Bulawayo).  The land became largely farmed by white farmers with a minor portion of land being farmed and inhabited by indigenous Bakgatla people.  In the early 1960s , when the homeland policy of Verwoed’s high apartheid regime became a reality, the land in the Pilanesberg and surrounds was expropriated to make land available for settlement of Batswana people in a so-called ‘independent homeland’: Bophuthatswana (established 1977). It was largely the Bakgatla peoples who lived in the crater complex itself and so it was they who were displaced to make way for the founding of the Pilanesberg Game Reserve in 1979.   Declared a National Park in 1984, it claims that it was the first protected area in Africa to be developed not only for conservation purposes, but also with the ‘specific intent of generating socio-economic benefits’ [for local communities]. (Pilanesberg Map and Guide Book p5). This seems quite a sweeping claim so I have my doubts as to how valid it is.

In October I took an American guest-turned-friend  for a one night stay in the Pilanesberg. We booked into Manyane Resort  where we stayed in a self-catering chalet comprising a sitting room and open-plan kitchen and a bathroom and bedroom downstairs.  Although described as a 2 bed-roomed chalet, the second bedroom is in fact an upstairs loft with single beds and – be warned – there are no windows and NO air circulation so it was very hot. In the current dry conditions with no grassed areas, the camp was bleak and a bit of a dust bowl but my guest was delighted with the bird life including a crimson breasted shrike.

The buffet breakfast was served around the pool area and we were lucky in that mid-week it’s not very crowded. In a camp that can take nearly 1000 people, over week-ends it is probably mayhem.

Two months later and after some rain the landscape was transformed. Lots of nutritious looking grass, trees in summer leaf, pools of water everywhere and wonderful washed crisp vegetation.

SPECIAL SIGHTINGS IN THE PILANESBERG

So it’s no exaggeration when we say that you can come to Joburg and see the Big Five! On my December trip when I stayed at Bakubung – a wonderful established camp with great facilities – in 2 days we saw 2 lots of lion, many rhino, 2 lots of leopard, a cheetah with 3 sub-adults, a very large herd of eland (20 plus), elephant, as well as lots of general game. Now I admit this was a very special 2 days of sightings but .. the amazing thing about animals in the wild is that (a bit like LIFE!), you NEVER know what is around the corner.

TOURS TO THE PILANESBERG

If you can’t get to Kruger National Park (which needs a good 3 days, ideally more), then Pilanesberg National Park is a great option. While of course you can self-drive, there are many tour operators who run day tours into the Park. It’s a question of finding the right ones as well as operators who will take smaller groups and individuals, plus often at short notice.  I have had guests who have used www.pilanesbergsafaris.com as well as www.ekalatours.com and they have all been very impressed with both their day trips as well as their overnight arrangements where applicable.  But they are not inexpensive!  But hey – with the exchange rate and having the chance to be in the bush – make the most if you can.

One thought on “The Big Five on Liz at Lancaster’s doorstep!”