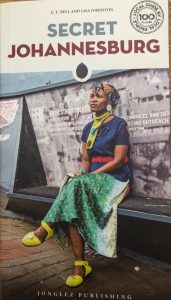 Some time back I purchased the gem of a book called Secret Johannesburg by Lisa Johnston and Claire Bell. These two photo-authors have gone on a treasure hunt through Joburg and its surrounds, and have found 93 little known objects, sights or sites.  It’s really beautifully researched with fascinating histories and contexts and while it isn’t for the first-time visitor for whom the Red City Bus, Soweto and the Apartheid Museum are always top of the list, this is a fabulous book for those who love peeling back the layers of Joburg.  Lisa and Claire are great writers and there is many a wonderful turn of phrase. So when they describe the ‘grit, the green and the glamour’ of Joburg, I thought this was a really apposite place to start a blog on 12 good viewing points in Jozi.

Let’s start with the ‘grit’ – the gradually reviving old Joburg business district, aka the City Centre, Joburg CBD or what used to be called ‘Town’ in the ‘50s, ‘60s and ‘70s.

As this is also the start of the Red City Bus Red route (and the end of the Red City Bus Green Route), Constitution Hill is a great place to get both a geographic orientation as well as an historical view of Johannesburg.  The Old Fort was built by ZAR [Zuid Afrikaansche Republiek] Government which, in the late 19th Century was trying to stop the British from invading the mining camps and claiming the gold. When the British defeated the Boers, the site became used as a prison, incarcerating racially segregated prisoners from colonial times into the Apartheid era. It was the site bravely chosen by the Judges of the Constitutional Court in the newly democratic South Africa.

From the Fort ramparts you look south towards the mine-dumps (Johannesburg’s historical raison d’etre); west over Braamfontein towards the original ‘burger’ townships which long-remained middle class Afrikaans suburbs; north over the terrain of the randlords on the Parktown ridge to the green of the Parks region; and east over Hillbrow, the flatland of Johannesburg – the centre of European cosmopolitanism in the ‘50s, ‘60s and ‘70s and now the home of immigrants from all over Africa.

And BEST of all  last month Con Hill launched its new Sunset Picnic on the Ramparts available on every last Friday of the month. Your picnic basket (made by the fort’s casual cafe The Hill) will be packed with gourmet goodies – sandwiches, salads, fruits and cheeses.  Tickets R395 including a picnic basket for two.

Another stop on the Red Bus Route is the Carlton Centre, the tallest building in Johannesburg (223 metres). It’s in the heart of Joburg CBD, in the centre of the grit! You can take the lift to the top floor (50) and get a 360⁰ bird’s eye view of Johannesburg Central.

The tallest residential building in Joburg is Ponte on the edge of Hillbrow.  Dlala Nje run daily tours at 11am which include a trip up to the 52nd floor where you’ll get a great view of the city.  Ponte is further east of the Carlton so the view in that direction is stunning.  Apart from the view from the top of this building, the history is also interesting.  You need to book on Dlala Nje’s website. You can also visit 5101 for a drink … but phone first to book.

In the centre of the hipster urban redevelopment area of Maboneng, is the Living room. Although only on the 5th floor of the Main Change Building at 20 Kruger Street, it’s a great place to have a sundowner and chill while looking at the urban action below. It’s closed Mondays and Tuesdays. Sundays in the Living Room have become a bit of an institution so you will need to book. All bookings (tables & single tickets) for Sundays in the Living Room are done through quicket.co.za  Bookings are charged at R135 per person which includes general entrance fee, a private table/seating area for you and your guests for the day. General entrance is R55 per person online and door pricing increases as the crowd builds up!

Moving to views of the ‘green’!

This has long been a favourite viewing point looking north over Johannesburg Parks suburbs.  Built in 1918 Munro Drive with its very steep gradient and one hairpin bend, links Lower and Upper Houghton. At the top of the ascent there is a place to park and enjoy the view to the north over Rosebank and Sandton; and on a clear day to the Magaliesberg.  If you are lucky enough to hit Jacaranda season it’s a fantastic spectacle of purple blossoms.

From Higher Ground, the restaurant in the grounds of St. Stithians School in Randburg, in one panoramic sweep you look south across to Sandton Central which has all been built since the mid 1970s. This skyline (photo taken March 2017) has already altered significantly with the near completion of  Sandton’s newest highest building, the Leonardo.  [The Michelangelo is 140m and when it pipped Sandton City, Sandton City added a spire to make it 141 m.]

And for a viewpoint dripping in glitz and ‘glamour’ try:

Another place to relax and have a drink while taking in the view is at the Four Seasons Hotel, Westcliff … with a VERY different crowd from Maboneng. Here at Flames looking down over Jozi’s urban forest, Joburg’s elite are very evident.  And if you go in late October/early November you’ll get the fabulous purple Jacaranda canopy.

And if you want somewhere even closer to Liz at Lancaster for a cocktail sundowner and a great sunset, try the Island Bar at the Hyde Park Southern Sun Hotel.  It’s located on the pool deck and has a very chilled ambience.

If it’s Wednesday evening then it’s drinks at Sir James. This amazing warehouse space which it shares with Katy’s Palace and Amatuli offers a really unusual view of the Sandton skyline.

One of the most famous viewpoints is from Northcliff Hill, the second highest point in Jozi. As with many places that can be isolated, be aware of being on your own after dark. But it’s a favourite place for groups to see the city lights and to take sunrise photographs.

Tours of soccer city are available on Thursdays (difficult to get information as you need to contact the FNB Stadium Management who are more than elusive).  And the added bonus of getting behind the scenes of this huge stadium built for the Soccer World Cup in 2010, are the views offered of Joburg from the south.

And finally, one site that I have still to visit is Da Gama Park in Dewetshof in the east near Observatory and Bruma.  The highest point in Johannesburg is on Observatory Ridge so it makes sense that Da Gama Park offers good vistas.  Kathy Munro of the Heritage Portal has written about Da Gama Park.

5 thoughts on “A dozen spectacular viewing points in Jozi”