The reports on South Africa’s hosting of the World Cup coming in from all over the world are overwhelmingly positive  with certain common threads weaving through most of the responses. The substance of most articles is celebratory – describing the connections made across race and class; the nation-building role of the event and the patriotism of all South Africans; the humanity, enthusiasm and generosity of South Africans as hosts; the new-found pride and confidence that the success of the tournament has given us; the re-imagining of South Africa both by ourselves as well as the rest of the world.  These sentiments are encapsulated by various commentators:

Fred Khumalo in his Sunday Times article 11/07: ‘Yes we can, yes we did’ writes:  What’s been touching with the tournament is that it taught us that when we put our minds to it, we South Africans can be good people, and we can achieve things that we never thought we could. We underestimate ourselves. The tournament opened our eyes to this. It encouraged us to tap into the wells of goodwill that run deep within our collective corpus as a nation. Yes, we can. Mark Gevisser writing for The Guardian says: But ‘we won’ most of all, because we could finally say ‘we’. 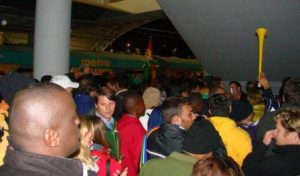 Ivan Vladislavic, in an interview (09/07) with Brian Shrefler of Phillysoccerpage.net says:   South Africans need reasons to celebrate from time to time, especially because we are such a divided society and live in a fragile democracy. Events that draw people together are important. People want to feel that they belong, they need reasons to feel part of something larger than themselves, some positive reason to get together. Danny Jordaan the Chair of the LOC in the Sunday Times (11/07) expressed the view that :  One day historians will reflect how the 2010 Fifa World Cup changed not just the way the world regards South Africa, but also the way South Africans regard each other.

Rather than this symbolic legacy of the tournament, others have looked at the more tangible legacy of infrastructural developments – a nascent public transport system being the most obvious one. Of course several articles refer to the disaster-predicting naysayers whose insistent message was ‘No you can’t’.  In the light of the success of the last 5 weeks, it is deeply satisfying to see the absurdities of some of those negative predictions of doom and gloom . I mean pur..lease … come on …. knife-proof vests imperative kit for visitors to SA; the dangers of poisonous snakes around the English base in Rustenburg ; probable attacks from wild baboons in the Cape; and, as if to mitigate the global havoc played by a certain Northern European ash cloud, the English tabloids wrote of the likelihood of earthquakes set to hit Durban and Cape Town.  As one journalist put it (perhaps a little generously) : ‘you are more likely to be killed by kindness than by criminals in South Africa’.  But as Chris Moerdijk (News 24; 12/07) says of local naysayers:  I’m willing to bet that from now on in South Africa, trying to find someone who didn’t believe we could hold a successful soccer World Cup, will be like trying to find someone who actually voted for the Nats [architects of the Apartheid regime] during the  40 years they were in power

Underlying nearly all the celebratory writing is the cautionary voice which raises the question: can the successful delivery of infrastructure, the organizational logistics, and the energy and goodwill that were all crucial to the success of the World Cup, be transferred to addressing the huge social and economic challenges facing South Africa?  As Tutu, the wonderfully irrepressible ‘Arch’ once said: ‘there is nothing like a deadline to focus the mind’. What then are South Africa’s deadlines for providing effective service delivery, good quality education, sufficient housing, and a competent health care system; for counteracting poverty; and for dealing with crime and corruption? Of course the most obvious one is the next national election in 2012.  In addition can the government apply the principles that made the World Cup a success. These prinicples include a clarity of vision and common purpose, the setting of strict deadlines and therefore adherence to principles of accountability and responsibility, constant monitoring by a hard task master/watchdog, (a more broadly based opposition party would help here), the employment of good and competent people, and harnessing the expertise of private enterprise.

While we are grateful to Sepp Blatter for backing South Africa as the 2010 host, for putting strict deadlines in place for completion of stadia, for insisting on the police presence and the instant law courts, there have been the standard damning critiques of FIFA. These focus on the autocratic demands, the mismanagement of its ticketing system, the marginalization and shoddy treatment of local service providers, the high-handed approach to any perceived competition with their sponsors, and the extravagant expenditure of the FIFA family. Many journos have written of FIFA being the real financial winners of the 2010 World Cup which, it seems, was the most profitable event in FIFA history. Apparently Fifa made $3.2-billion from selling its marketing and television rights, 30% more than it received for the previous tournament. (Buddy Naidu and Rowan Philp ‘What a show’ Sunday Times 11/07)

In contrast, many journalists, local and foreign alike, have referred to the ‘real heroes’ of the World Cup: the some 18,000 volunteers who directed us with good humour and friendliness, the helpful and patient police force who made our public spaces safe, and the everyday ordinary South Africans. It was these people who welcomed our visitors, who belted out all the verses of our extraordinary national anthem – from the initial isiXhosa verse to the last Afrikaans verse with all its dark connotations; who introduced the world to the vuvu (which has now replaced the carved giraffe as airline- cabin-crews’-worst- nightmare-take-home-tourist-curio); and who backed their teams when Bafana went out of the Cup. I just loved this vignette reported in The Star (page 1  by Angelique Serrao, Nontobeko Mtshali, Thandi Skade and Kevin McCallum):  A group of four men stood apart from the rest of the crowd. Dressed as a leopard, dog, frog and gecko, it wasn’t clear what team they supported. “We were over-excited and went to a costume shop,” said Gareth Burton. “We wanted to dress as a bull and matador, but they were sold out.”

Of course there were certainly glitches and major mess-ups: traffic gridlocks at the opening game, incidents of theft in various hotels as well as pick-pocketing (it seems in most cases the culprits were caught and tried in the specially set up courts – some 100 hearings were held), lack of communication around public transport options and procedures, bottle necks getting out of stadia, power cuts in various suburban areas, etc. But these mistakes were relatively minor in the broad scheme of things which saw  an average of over 49,000 fans attending every match; flights into Johannesburg’s OR Tambo International Airport doubling to 800 a day;  an estimated influx of 300,000 visitors for the World Cup period, etc.   As Chris Moerdyck writes with his inimitable irreverent humour (News 24, 12 /07  in ‘Apologise you bladdy agents’) :    After all, using these few mistakes [ the cock-up at Durban airport, the ticketing fiasco and the traffic jams in Joburg ] to suggest that we failed, would be like cancelling a Miss World pageant because one of the beauty queens had a pimple on her arse. Despite all the worst predictions as David Smith reports in ‘World Cup 2010: Sceptics drowned out by another rainbow nation miracle’ The Guardian 11/07 :  No one died. No one was stabbed, no one was kidnapped and no one took a wrong turn into the clutches of a gang of garrotters. One American tourist did get shot – in the arm – but he wasn’t here to watch the World Cup [and he was in a dodgy part of town].

While the World Cup fever created a sense of community in terms of connectedness and a shared common goal and purpose, it was the opening up of public civic spaces which I found particularly powerful and affective.  Whether it be the Metro Rail to Soccer city, the stadia themselves, the Fan Fests and public viewing places, areas usually either deserted at night (Braamfontein) or somewhat dodgy (around Park Station), because these public spaces were now busy (and policed) they became safe, allowing for freedom of movement and interaction with others sharing this space. For me, this was what was so liberating. Vladislavic (interview 09/07) reflects on this:   ………  South Africans have lived in divided spaces for a long time. In recent years, we have been trying to develop a new sense of public life, of sharing space with other people and breaking down the divisions, but much of our social life is somewhat introverted, one could even say privatized. The World Cup has taken people back into public spaces. …. It was great to be able to walk through parts of the city that are normally deserted at night, to go down and find the streets full of soccer fans on the way to the stadium. The presence of people on city streets always makes them safe. One of the ironies of a city like this is that people avoid the streets because they think they’re unsafe and that’s precisely what makes them  dangerous. Because they’re empty. If you get enough people out on the streets they’re safer.

I loved Brian Shrefler’s response to Vladislavic’s comments:   ‘It sounds like an anomalous snowstorm. It’s exactly what Johannesburg needs, this sudden flurry of community.’ 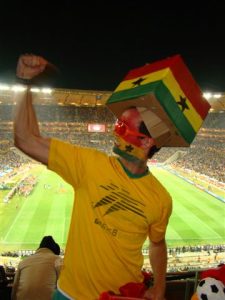 When I drove on the M1 Motorway this afternoon and passed the huge billboard saying ‘There is no greater victory than  uniting a nation. Thank you Bafana’ , I felt  the privilege of being part of it all;  sadness that it is all over and that the World has left our party; huge pride at being South African; and nervous trepidation as to how we will move forward from here.

THANKS to Mike  Bleyenheuft (a.k.a Woogs) for the great photographs

5 thoughts on “‘A flurry of community’: reflections on the 2010 World Cup in South Africa”