What do we do in times like this? Watch the news to keep abreast?  Weep for those small businesses and informal traders who have lost everything; for all those who will lose their jobs; for the further disruption of the vaccine roll-out; for the possible shortage of oxygen, essential medications, and basic foods; for the wanton devastation; for the chaos and mayhem? Empathize with a young mother seen leaving a looted shop with 3 packets of disposable nappies? Put together food and essential goods parcels to be delivered to places where people have nothing left and where there is nothing left to buy?  Rage against the wanton destruction; the seemingly senseless vandalism; the frenzied plundering of whatever products can be piled high onto a truck, a bakkie, a car, a trolley, a bicycle, a pram, a head – consumer goods including flat screen TVs, booze,  medication.  Despair at the shameful lack of law enforcement; the long-term implications on the economy; the loss of investor confidence; beating the pandemic; and most of all the setback of steering  our nation on a less morally bankrupt path.  Question whether this is only the predictable result of  the so-called ‘perfect storm’  – The ‘perfect storm’ of ethnic mobilization, the fall-out from ANC’s concerted recruitment drive in KZN , dire poverty, youth unemployment, years of frustration with a deeply unequal society, broken promises and poor service delivery, the long term shocking effects of Apartheid and the immediate shocking effects of State Capture …. or wonder whether there are many who will benefit by taking a match to this tinder box of valid grievances?

I have done all these things and more. I have also retreated, escaped, conserved strength to make a difference where I can. Light reading is one way to attempt to keep anxiety, despair, tears and a feeling of helplessness at bay. It is in this vein I post this ‘frothy’ piece in a time of such turmoil and national emergency. 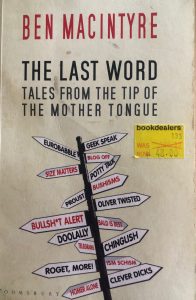 I enjoy words – how wordsmiths use them poetically, playfully, elegantly, seductively. I love exploring their origin and the ways in which meanings change over time.  So when I was lent Ben Macintyre’s The Last Word Tales for the Tip of the Tongue, I reveled in his collection of short pieces about words and language. As the one-liner on the cover says: “Witty and utterly delightful, The Last Word will tease, tickle and tantalize lovers of all things lexical.” It’s one of those books I would love to read with a pencil in hand as each page has a gem I would like to mark and remember.

Sometimes there are no words in English

Other languages have words for concepts or things which English does not have. I have 2 young grandsons who, in those halcyon pre-Lockdown days, would come for sleepovers. In this time of separation, I looked at their toy and activity cupboard with new eyes only to realize that it is somewhat depleted.  And it struck me that these 2 boys are tingo-ers at heart, along with many other grandchildren I suspect.  Tingo is a word from the Easter Islands meaning “to borrow from a friend’s house, one by one, until there is nothing left”!

I wonder if there is a word in other languages for that feeling you have when you are about to sneeze …… and you don’t.  National Public Radio in the US ran a competition to name this proto-sneeze and came up with ‘sniff-hanger’. (p 142) 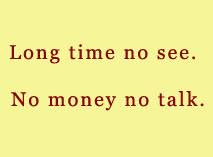 Pidgin is of course one way that new words enter languages and Macintyre looks at the 17th century origin of pidgin as a language which allowed the British and the Chinese to communicate when doing business  The word pidgin probably derives from the Chinese pronunciation of the word ‘business’. Words like ‘look-see’, ‘no can-do’, ‘no-go area’ all stem from the language of Anglo-Chinese trade. Macintyre makes the point that pidgin has to work harder to say something for which there might be a single word in another language.  Among the Koorie people in the Australian Outback a solar eclipse is: ‘Kerosene lamp him b’long Jesus Christ gone bugger-up altogether’. Now how delicious is that?  (p36)

Tok Pisin spoken in Papua New Guinea is not really a pidgin in the sense of a lingua franca developed to facilitate communication with speakers of other languages. In linguistics it is considered a creole language, as it has become a first language for many people – an estimated one million people now learn Tok Pisin as their primary language.   The name ‘Tok Pisin’ comes from ‘talk’ and ‘pidgin’.    Pidgin words are almost infinitely adaptable as the image on the left shows.  ‘Gras’, for example in Tok Pisin,  descended from the English word ‘grass’ extends to ‘gras bilong  solwara’ (salt water) – ‘seaweed’; and ‘gras nogut’ (no-good grass) – ‘weeds’.  And how much more picturesque is ‘skru bilong han’ (screw of the arm) rather than an elbow and ‘skru bilong lek’ (screw of the leg) is clearly a knee! 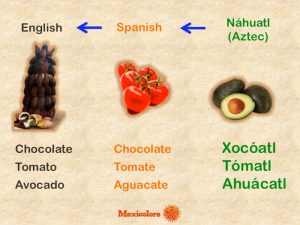 Besides the more common European food names, the Aztec words guacomole, chilli and tomato added to the English culinary language.  And I love this: ‘”Avocado” comes from the Nahuatl term for “testicle”, on account of its shape. This piece of information may explain the collapse of the Aztec empire. It is amazing they could even walk. ‘  (p55) 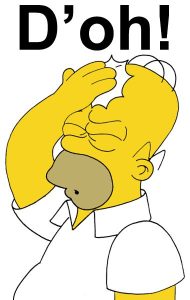 Popular culture has of course been very influential in introducing new words into everyday speech. So for example “‘Do’h!”, Homer’s grunt of irritation in The Simpsons  is now included in the Oxford English Dictionary as “expressing frustration at the realisation that things have turned out badly or not as planned or that one has just said or done something foolish”….. “Meh” indicates a profound lack of enthusiasm, and is often used by shrugging teenagers to mean ‘whatever’, ‘so-so’, ‘I don’t care’ and ‘bo-ring’.” (p86-7)

Whilst ‘Meh’ hasn’t quite made it into the Oxford Dictionary it is included in the Merriman-Webster Open Dictionary, the user created Wicktionary and the Urban Dictionary. 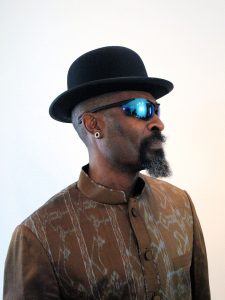 Items have been named after the people who made or invented them.  The Bowler brothers made hats, Jules Léotard made famous the one-piece gymnastic outfit, … and Karl Friederich Louis Dobermann was a German tax collector who bred a particularly vicious guard dog to dissuade irate taxpayers from attacking him.  [Ed Kieswetter there’s an idea for you]. Laszlo Biro gave us smudge-free writing (‘and cost us a fortune in stained pockets’, Rudolf Diesel invented the engine that bears its name and Thomas Blanket was a fourteenth century weaver from Bristol. (p110)

What does the loss of a language mean?

We mourn the extinction of flora and fauna species, but what of languages? More than half of the world’s 7000 languages are expected to die out by the end of the century (maybe many more if climate change denialists continue with their rhetoric).  In a fascinating section called “Languages speak in unexpected ways” (pp 304 – 307), Macintyre points to the connection between language 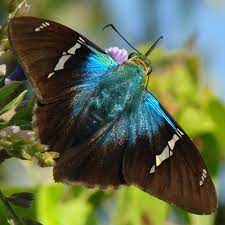 and bio-diversity and how languages of ethnic groups “contain vitally important information about species often unknown to formal science”.  The Mexican Tzeltal tribe knew that although the adult two-barred flasher butterflies all looked the same, different types of larvae attacked different crops. So agriculture and survival depended on knowing and naming each distinct variety of larva. While scientists long assumed this butterfly was a single species, thay have now confirmed what the Txeltals knew a long time ago – that there are at least ten species of the two-barred flasher butterfly.

From literature to science

“Doodling on his notepad in 1981, the science fiction writer William Gibson was trying to think of a name for an invisible electronic communications network he had dreamt of for a new short story, ‘Burning Chrome’.  ‘Dataspace’? No, he crossed that out. ‘Infospace’? No, too nerdy. Then he hit of the perfect word, scientific-sounding, but also alliterative and oddly poetic: ‘cyberspace’.  …. It would be another decade before the internet transformed the world, but a novelist’s imagination had already given shape and meaning to something that science had yet to invent”.  (p58)

And the internet was to change English ‘more radically than any invention since paper and much faster. The English language is currently embracing new words at a rate not seen since the proliferation of new words during Shakespeare’s time’. (p140)  “If a word works, the internet breathes life into it’. (p142 )

Consider, for example, the variety of words [in Scots] for different sorts of wind: ‘skolder’, ‘guster’, skuther’, ‘shushle’, ‘tirl’ and ‘gurl’. Only Scots could have produced the word ‘dreich’ – meaning ‘dark, gloomy and dour’ – but above all evoking the weather pattern, peculiar to Scotland, when the rain blots out the horizon. Sometimes for weeks on end.  ‘Hochmagandie’ is a far better word than mere ‘fornication’. Who would not rather blow their nose (‘neb’) into a ‘snochterdichter’ than a mere handkerchief?’

And it seems that it is not just wind that the Scots have many words for: 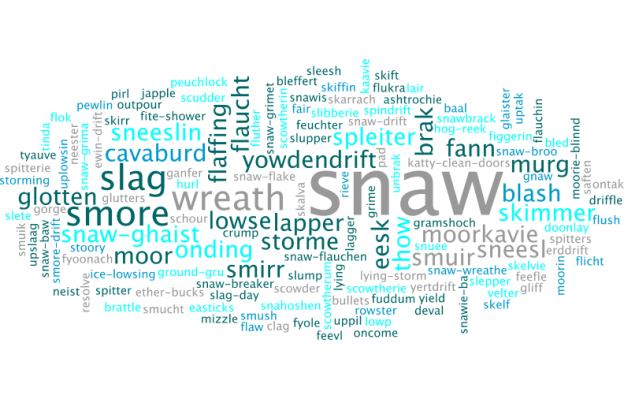 If you don’t know why snow is so important to the Scots, you have clearly not tried to wear a kilt in this weather!

And finally it is said that George Bernard Shaw thought that cricket was invented to give the unspiritual English an understanding of eternity.

And these gems above are just a fraction of the wonderful tidbits from the rest of the book.  Highly recommended escapist read.