February is Black History Month and this time last year I joined a fascinating tour with Joburg Heritage to explore Dube in Soweto and unveil some Blue Heritage Plaques.  All Joburg Heritage Tours are a treat, but this one led by the indomitable Flo Bird and the town planning historian Dave Gurney as well as local guide Cheche Selebi, was very special.

Potted history prior to the naming of Soweto in 1963

Dube has a very interesting history – but, to back track a little.   The area, which  only became known as Soweto in 1963, began with the relocation of black people from the Brickfields area (now Newtown) to what was called the Klipspruit Settlemment on the farm of Klipspruit.  By 1937 most of this settlement became part of what today is known as Kliptown as well as Pimville.  By 1946 the additional  “native settlements” (as these areas under control of the Johannesburg City Council (JCC) were called), comprised Orlando East (for more see LizatLancaster blog) and Orlando West, Mofolo and Jabuvu (known as White City).

Dube’s origins go back to 1946  when the JCC had a vision for or “a more upmarket ‘native village’ to accommodate ‘elite African people’ with ‘fair education’ who could afford middle class houses with freehold rights on stands of 464m².” (Bester  2018)  As the popular and influential leader John Langalibalele Dube had died that year, his memory was to be honoured by naming this new area after him.

But this was of course all a pipe-dream, as freehold ownership by Black Africans had not been permitted since the Native Land Act of 1913 (apart from in small pockets like Alex and Sophiatown where land had been bought prior to 1913). In addition, post 1948,the Nationalist Government brought in increasingly harsh and stringent racist legislation, all exacerbated under the infamous Hendrik Verwoed who was made Minister of Native Affairs in 1952. This resulted in a very watered down “exclusivity” and home ownership in Dube with small stands of 247 m²; a maximum of a 30-year lease (which many did not take up preferring to rent); standard small box houses (with a few exceptions); and with the only perk being water and sewerage connection inside the houses rather than in the yard outside. And to add insult to injury the Government pursued its policy of dividing settlements along ethnic lines with Dube being reserved for Nguni residents. Fortunately this was never enforced.

Dube the home of many famous people

Dube has been home to a number of well-known people like Gibson Kente, (playwright) Dr R Gugushe (educator), and  M T Moerane (World newspaper editor 1962/68).  Richard Maponya started his first store just around the corner from his small home in Dube,  His businesses proved so successful he opened the huge Maponya Mall in 2007.

But these were not the famous people whose plaques were going to be unveiled on our visit.  The first house we visited was that of Makhura Frank Sexwale whose wife Godlieve still lives in the house where they brought up their six children including the well-known politician/businessman Tokyo.

Moving on we were privileged to meet Andrew Mlangeni himself who, after unveiling the plaque outside his house, signed editions of his biography for proud owners.

Dr. B. Vilakazi (academic and poet) and his family were forcefully moved from  Sophiatown to Dube during 1955 as were Dr. A.B. Xuma and his family.  When Xuma died in 1962 his widow Madie sold the house to Dr. Natho Motlana (Chairman Committee of 10) and his wife Sally. 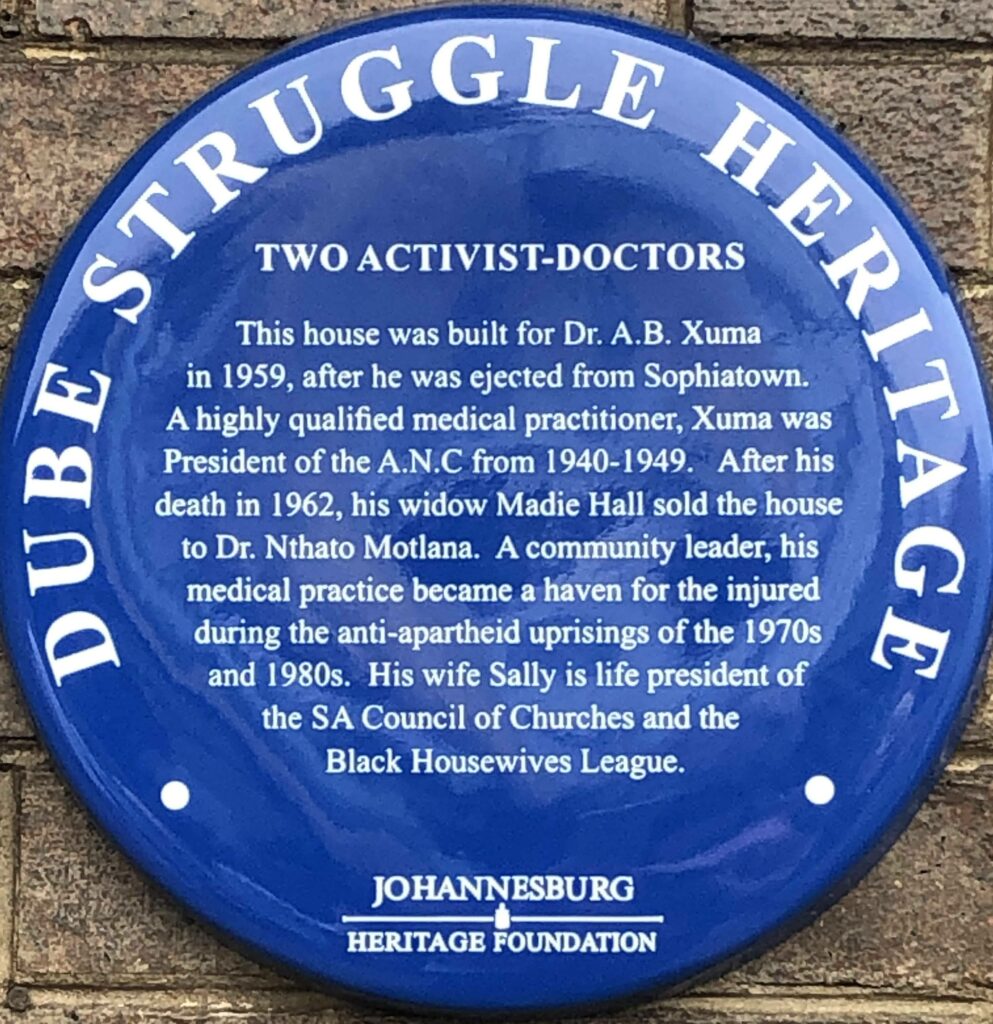 Frank Leballo and the Mchunu home 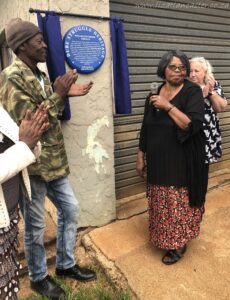 “While training as a teacher, Potlako Leballo was only sixteen when he volunteered for active service at the start of World War II. Twice taken prisoner in North Africa he was court-martialled for objecting to discrimination against black South African soldiers. Initially a member of the ANC Youth League, he broke away with Robert Sobukwe to form the PAC becoming Second in Command and Chief of its military wing, APLA-POQO. He was living in this house while planning the pass law protest at Sharpville for which he was jailed for two years. PK was banished to Vryburg, but chose to return to Lesotho, the land of his birth. 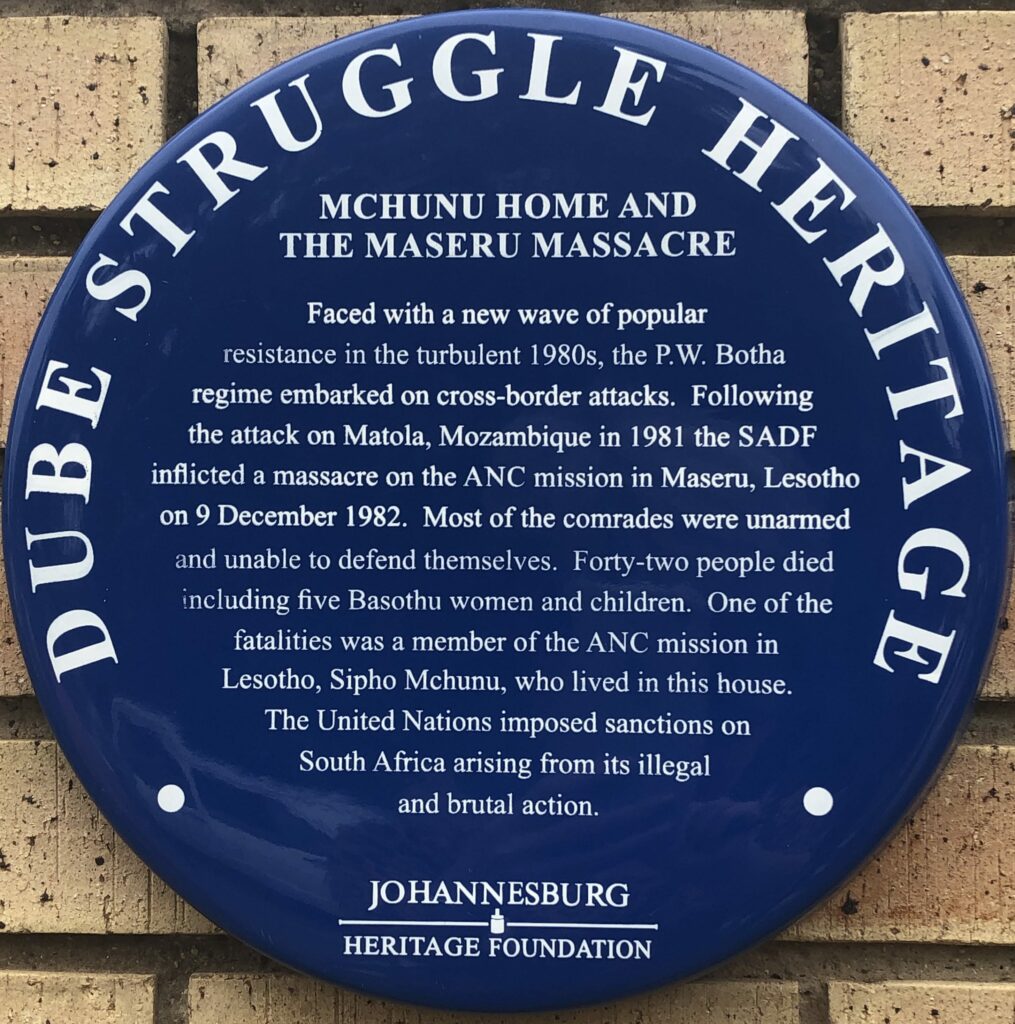 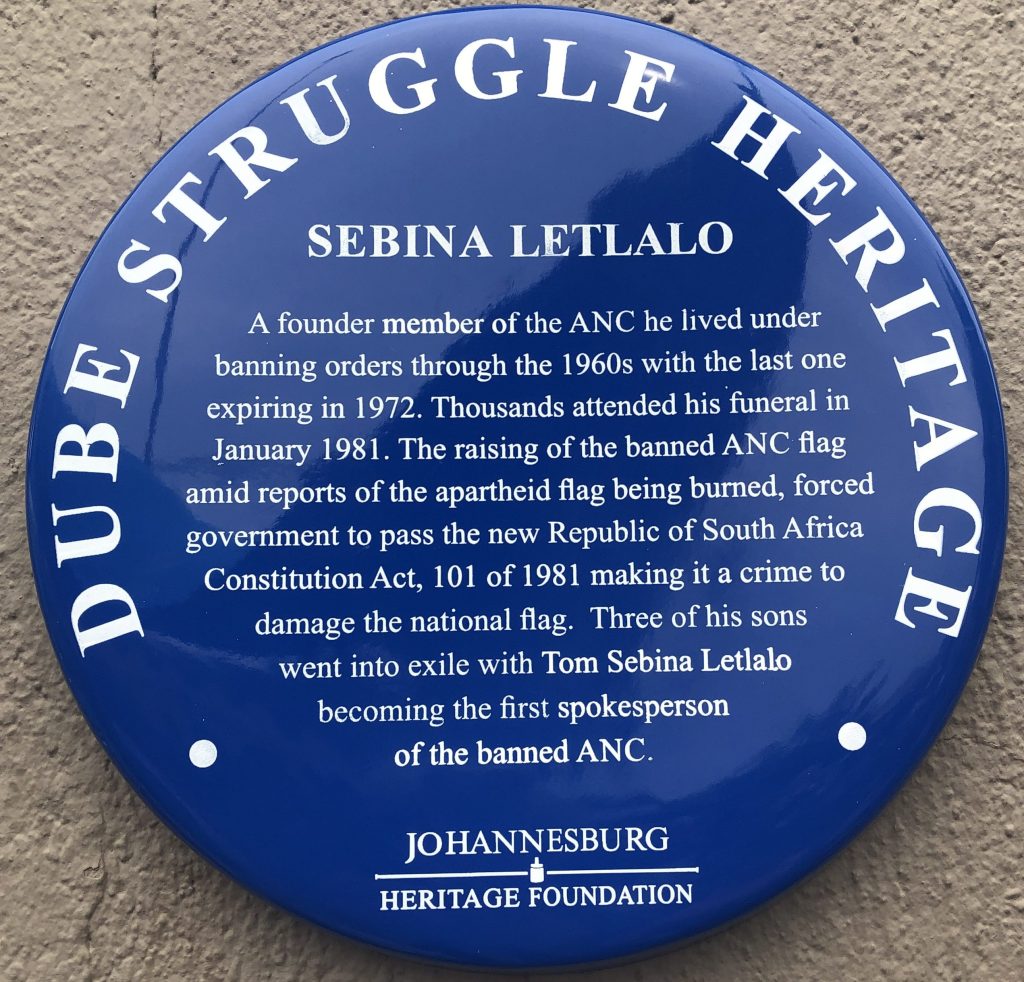 And the crowd followed with lots of celebratory singing dancing to our final port of call: the unveiling of Sebina Letlalo’s plaque where an amazing spread had been laid on by local women. The hospitality and generosity was truly overwhelming.

What an amazing end to an extraordinarily special day!  My post is a year late but .. cliche of cliche’s … better late than never!