South Africa has excellent theatre which is so often under-recognized

‘Us South Africans’ don’t know how lucky we are with the quality of theatre and the comparative low cost of tickets for what are often world class productions.  And Joburg is particularly spoilt for choice, with a range of completely different genres. There is too much dark comedy and way too many farcical theatrics in the real world at the moment, so let’s get some light relief with good theatrical comedy. 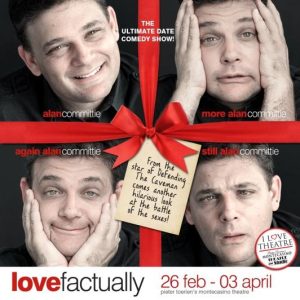 irrepressible protagonist in endless re-runs of Defending the Caveman, which, despite all its un-P-C gender stereotyping,  had some very funny vignettes of situations many of us have experienced. The same seems to apply to Love Factually which got excellent reviews.  Love Factually runs until 3rd April at Monte Casino Theatre.

Opening at Theatre on the Square on 29th March is Shape,  a new comedy written by husband and wife team  Steven and Kate Sidley and directed by Greg Homann.  It’s a satirical take on the different attitudes of three South Africans to their shared experiences. ‘The lives of these very different characters converge on the floor of a Joburg gym. The play explores their typically South African concerns – race, gender, politics, relationships … and the quest for tighter abs!’

And if you still want some more comedic entertainment, the Joburg Theatre has Space Dot Comedy a stand-up comedy show on the last Friday of every month.  Each show features a mixed line up of six comedians and the host, Virgil Prins.

POPArt in the 12 Decades Hotel in the Maboneng Precinct always has amazingly good productions which vary from the quirky and off-the-wall to the powerful and thought-provoking – often in the same play.  It’s a very small informal theatre which has short runs of 4 performances – Thursday, Friday and Saturday evenings and Sunday afternoons and shows usually only an hour long.  So do yourselves a favour and keep an eye out for upcoming productions at POPArt as they have really excellent shows.  Fruit (from 31st March to 3rd April) is a one hander in which 14 year old Matlakala (played by Matshediso Mokoteli) talks to her doll about her life in Soweto.  ‘There are no bright lights or busy sets, but rest assured, this will be one of the most vivid and compelling productions you will see this year’ – Tracey Saunders, Cape Times.

Eating in Maboneng before the show

If you want to have a quick bite beforehand there are some great options close by – House of Baobab Cnr Kruger and Main 011 039 1632 for mouth-watering West African style dishes; Che Argentine at 303 Fox St – stunning meat and vege dishes cooked over an open fire. But you need to book WELL IN ADVANCE – it’s incredibly popular (011 614 0264). And the extraordinarily inexpensive Little Addis for big platters of njera and other Ethiopian delicacies.  (Take your own wine – it’s not licensed.)

Sophiatown is back at the Market Theatre

And to celebrate the Market Theatre’s 40th birthday year, Malcolm Purkey’s iconic 1986 musical Sophiatown returns for a brief run from 24th March to 17th April.   Going to the Market Theatre is so easy now. Over Mandela Bridge, right at the first traffic lights into Carr St,  left at the first traffic lights into Miriam Makeba St and the underground parking for the new Newtown Junction Mall is on your right.

Take the lifts to ground level which opens out onto an outdoor piazza between the newly opened mall – the Newtown Junction –  and the adjacent Workshop (a shopping emporium in the old Potato Sheds of the original Newtown market – Joburg’s main fresh produce market from 1913 till the early 1970s). Various restaurants open onto the piazza including News Cafe as well as the Potato Shed (Tel: 010 590 6133) sister restaurant to Grand Life Café in Hyde Park.  Fabulous pre-theatre fare is the wide selection of baked potatoes with scrumptious fillings.

So forgo the 989th outdated Jeremy Clarkson Top Gear re-run foisted on us by DSTV, tear yourself away from rugby and cricket replays, and, instead of asking friends over for supper, ask them to join you in exploring Jozi and its thespian delights.  That little bit of planning and effort  will be worth it I promise.

One thought on “Abandon mindless nightly repeats of DSTV Jeremy Clarkson re-runs: hit the footlights instead”