The Sheds@no1Fox gets another revamp

Mid-morning on a cold winter’s day is not the ideal time to experience  a newly launched industrial-space leisure hub in Jozi inner city, but despite the cold winter chill and the fact that few people know of the reopening, we still had a great time a few week-ends back when we made our way down to the newly developing precinct at no 1 Fox Street. It’s had a fab remake after its initial launch back in 2014.

I went with my family and grandchildren intending to see the 2016 Wildlife Photography of the Year Exhibition which has come directly from London’s Natural History Museum.  But … first we had to have coffee and something to eat, so browsed our way around the food stalls with fabulous mouthwatering offerings ranging from hamburgers and wraps to meze platters and seafood delicacies and of course, amazing cakes and pastries.  We settled for delicious wraps and hamburgers brought outside to our table in the sheltered sunshine. 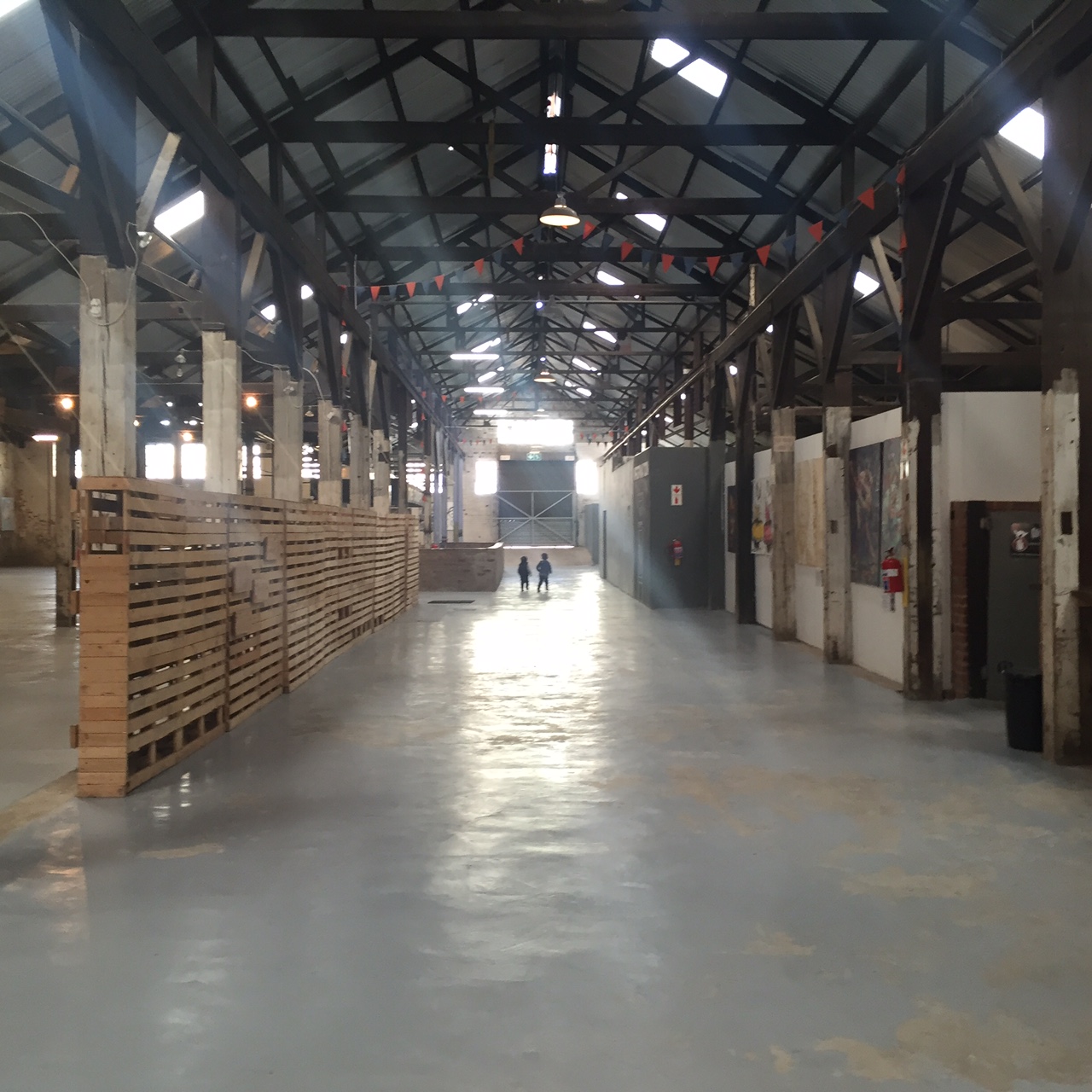 Oh the power of the echo in a huge cavernous empty space!  Source: LizatLancasterGuesthouse

And then the two little munchkins wanted to explore – what a space for 2 energetic toddlers.  You need an adult per child to keep watch over them! And man, did they enjoy the power of their own voices in the cavernous cathedral-like space of the building housing Fox Junction Event Venue (seen above). Unfortunately all this adventure and excitement meant we hadn’t left ourselves enough time to see the photography exhibition, but the good part is that we’ll have to go back.

There are currently 5 main spaces:

Very much a place to drink rather than eat.

I have quite a long connection with no 1 Fox St because, back in 2008 when I was still doing heritage research work for developers in the inner city, I was asked by the Johannesburg Land Company who owned the Hudaco site, to compile a history of the site. Unfortunately the project was called to a halt so I did not complete the report and only have a very rough working draft.

The buildings at no 1 Fox St were built as workshops and warehouses for the engineering company Hubert Davies and many date back to the late 19th Century.

Davies trained as an electrical engineer via apprenticeship in England and came to South Africa in 1889. Initially employed at Jumpers Gold Mine, he is said to have installed the first telephone on the goldfields – a phone linking Jumpers Battery to the Mine Office.

From humble warehouses to head office at Hudaco House the 1930s

By 1891 Davies had set up his own company and he was very soon awarded the contract for an electricity plant for the Johannesburg Lighting Company.  In 1893 Hubert Davies and Co leased the land at 1 Fox St from Robinson Mining Company to set up their workshops and stores. In 1898 William Spain joined and the company became known as Hubert Davies and Spain Engineers, as can be in seen in the accompanying photo (above) from May 1899.  After a brief closure with the outbreak of the South African War when the company relocated to East London, the company’s manufacturing section (operating as Hubert Davies & Co after Spain left), remained at the Main/Fox St premises until the 1960s.  Completed in 1932 in Rissik St, the Head Office of Hubert Davies and Co., known as Hudaco House, was occupied until 1962.

Heritage gives ‘dead sites a second life as exhibitions of themselves’

So, empty and abandoned for many years, it is great that new life has been breathed into the corrugated iron, brick and wood structures in the eastern part of town known historically as Ferreirastown (as this is where Ferreira set up the first mining camp with the initial rush for gold in 1886).  Property developers and the leisure and entertainment industry have enabled the buildings to survive through adaptive re-use.  As the heritage theorist Kirschenblatt-Gimblett says in her 1998 book Destination Culture: Tourism, Museums, and Heritage:  ‘Heritage is a mode of cultural production in the present that has recourse to the past. Heritage thus defined, depends on display to give dying economies and dead sites a second life as exhibitions of themselves.’

I love how entrepreneurs (many of them quite young) are contributing to the inner-city regeneration: from the array of developments in Braamfontien, to the fast expanding Maboneng precinct, to newly launched no 1 Eloff St and now this reworked amazing industrial heritage space.