Over ten years ago the concept of a Cultural Arc was mooted by Prof Carolyn Hamilton, then Head of the Humanities Postgraduate School at Wits. Envisioned as a metaphorical sweeping link between three powerful cultural institutions across the geography of the city, it would connect the Johannesburg Art Gallery on the east, to Wits in Braamfontein and MuseumAfrika in Newton on the west.  This concept lay dormant and unrealized for a decade. For the first time in 2012, with the opening of the Wits Art Museum (using the catchy acronym of WAM), it looks as though it could eventually become a reality.  However, the City needs to increase its funding and support for the two municipal instititions on east and west of Joburg for this to happen – but more of that below.

With great fanfare, WAM opened 3 weeks ago. Designed by Nina Cohen, Fiona Garsen & William Martinson with a very strict budget of some R42 million, this contemporary space, home to a collection of about 9000 art works, is the first Museum in South Africa to dedicated to African Art.

With its ground floor displays visible to passers by through large glass walls, it is a major contribution both to Wits’ link with the City, as well as to its conversation with the burgeoning creative arts spaces that have opened up in Braamfontein.  There is also an innovative digital pavement installation – for more see   http://www.jhblive.com/reviews/art/tech_meets_art_at_wam/106284 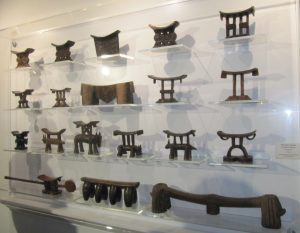 The opening exhibition WAM! Seeing Stars shows 350 of the most important works in the Wits collection, partly explaining the title of the show. 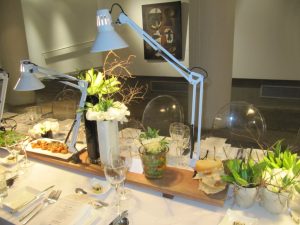 The opening night on 19th May was followed by a dinner two nights later organized by the Forum Company who run events at the Turbine Hall in Newtown.  Sadly these photos show the fare and table settings for the VIPs.  The food served to the rest of us was less impressive and in fact quite disapppointing – over priced and rather ordinary, saved only by a great fruit mouse served in a thin delicate chocolate hoop – fabulous. 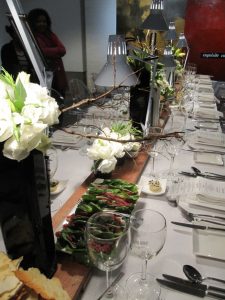 Currently showing at JAG is the excellent exhibition of South African prints which runs until 6th July (See https://lizatlancaster.co.za/blog/jag-comes-alive-with-an-impressive-exhibition-of-prints-coming-of-age-21-years-of-artist-proof-studio ) . Now it remains for the City of Johannesburg to invest funds into this important institution as well as into the somewhat damp squib that Museum Afrika has become.  Once signaled to be the flagship in the Johannesburg Development Agency’s and Blue I.Q’s grand plans for Newtown as the city’s cultural precinct, this potentially rich heritage and tourism resource remains under-funded, understaffed and rather ineffectual in the Joburg cultural scene.   Until the City commits funding, resources and support to these two important cultural heritage civic institutions, the idea of a vibrant Cultural Arc will remain a concept only.

But in the mean time it is wonderful to have TWO great exhibitions of local art to recommend to international visitors who always ask where they can see local art and heritage on display.