Like many born and bred Jozi-ites I have seen many iterations of this mad brash vibrant city, not least of all the Sandton sky-line.  Glinting glass phalluses compete for attention a la Donkey-of-Shrek fame in a persistent “Choose Me! Choose Me!”.  The bigger, the taller, the more expensive, the more innovative the style, the louder the voice.

A recent Johannesburg Heritage Foundation virtual tour of Johannesburg’s Art Deco buildings with Clare Eisenstein and Brian Mckechnie, made me reach for the Bible of Joburg’s buildings: Clive Chipkin’s inimitable “Johannesburg Style Architecture and Style 1880s -1960s”.  As in the current Italianate craze, with names like Michelangelo, Leonardo, Monte Casino and faux “palazzo styles’,  so in the 1930s, Joburg emulated styles from overseas.  With the economic boom of the 1930s instead of turning to the sober classicism of Edwardian England, it was American pezazz that influenced many of Joburg’s new buildings.

Art Deco and the age of modernity

The roaring 20s and into the 30s was a time of travel, speed, and transport; ocean liners;  commercial air travel in its early infancy; aerodynamic designs; horizontal lines of speed; and soaring verticals.

The Art Deco movement, originally known as the “Style Moderne” (a reaction to the florid excesses of Art Nouveau), was introduced at the 1925 Paris Exposition Internationale des Arts Décoratifs et Industriels Modernes (International Exhibit of Decorative Arts and Modern Industries).

At 11 storeys, Astor Mansions, an also-ran second cousin to the 77 storey Chrysler building, was the tallest building in Johannesburg for a brief spell until the completion of the Ansteys Building in 1935.  The name Astor mansions refers to the Waldorf Astoria; the round arch inset is reminiscent of the Chrysler building; while the spires and flagpoles draw from the language of ocean liners. 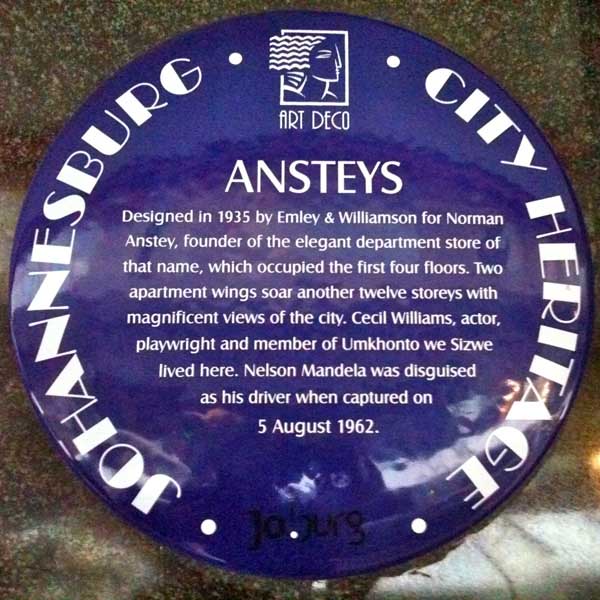 Built in 1938, the 11 storey Normandie Court was named after the Normandie passenger liner.  The Normandie held the Blue Riband in 1935 and 1937. The Blue Riband was the unofficial accolade given to the passenger liner crossing the Atlantic Ocean in regular service with the record highest average speed.  It is not only the name that evokes the world of ocean liners.  The Star in April 1938 said the building was ‘like the prow of a gigantic liner’ with porthole windows, ship’s railings on the balconies, flat roof canopy and curved facades like a ship’s hull.

Schlesinger and the “style moderne”

But for Clive Chipkin,  (p103) it was I.W. Schlesinger who became the ‘engine for Americanization and modernisation in Johannesburg in 1920s and 30s”.   I.W. Schlesinger  founded the African Consolidated Theatre [ACT] and under his direction 4 ACT buildings, with matching logos brightly lit at night, declared the branding and corporate identity of Schlesinger’s entertainment empire.  Chipkin writes (p104):  “He saw architecture as a branch of advertising (like Gordon Selfridge on Oxford St in 1908 or Pope Julius in Rome in 1500). So he promoted an alternative to the post Edwardian architecture of the Baker School, adopting instead the stylisms and technology of Art Deco New York. All the unwritten assumptions – the parochialism and elitism, the reticence – of Anglo-South Africa came to be challenged by the breashness and drive of American populism. And Schlesinger was its local emissary’.

Whose heritage gets preserved?

Of course celebrating and preserving Joburg’s Art Deco heritage is not without its controversies. Municipal neglect is notorious, and widespread interest in a heritage built for and by whites at the height of colonialism is clearly problematic.  The #BewareofColourProject highlighted municipal neglect.

Art Deco declined after World War II when the lavish use of ornament, colour and intricate embellishment gave way to a more minimalist approach and reduction in decorative detail.

3 thoughts on “Art Deco in Johannesburg”