What can I do that will make a difference?

So many people are frustrated by the increasing gross inequalities in our society, by the lack of government interventions and support and often ask in frustration and with a sense of powerlessness “What can I possibly do that will make any difference?”  Well here’s something you can do very easily – get to know your local recyclers and start working with them.

Integration of reclaimers/recyclers into the Johannesburg waste collection system

Recently I went to a fascinating presentation by Dr Melanie Samson (Geography Department Wits University) on a project titled “Building an inclusive circular economy: recycling with reclaimers”.  She showed astounding stats and figures as to the the benefits that reclaimers provide with their “separation at source” services.  Samson made very clear that this project is not about formalizing an informal economy; it is rather about integrating an already working system.  In some areas (like Craighall Park) residents are currently asked to separate organic waste from recyclables, the latter to be collected by Pikitup. However when an independent company is outsourced to collect recycled waste, (a consequence of a neo-liberal economic model) it makes an already tough job even more challenging for reclaimers.

The Reclaiming sector of the economy 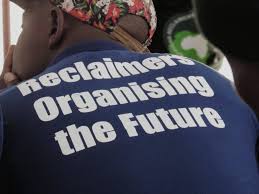 It is quite extraordinary how grass roots initiatives begin and grow; and how they provide a crucial role in the market.  Think the mini-bus taxi system (a staggering 69% of all South African households use mini-bus taxis); spaza shops;and the informal recyclers (or reclaimers as they like to be called), who have become a vital link in the value chain.  The African Reclaimers Organization [ARO] was formed last year with Eva Moekoena (africanreclaimers@gmail.com)  as Chair.  Follow them on Facebook – their posts are inspirational.

The reclaimers and the miracle they have achieved

The reclaimers have achieved so much against so many odds. Samson emphasized how they saw a gap in the market and created a system. Where others see trash, they see opportunity. She points out how they are experienced as they have been doing it for many years; they are skilled and know exactly what has value and what doesn’t.  Buy-back centre prices vary daily and the reclaimers need to have an understanding of this economy as well. So, for example, waste paper can be R4.50 one day and R1 another. They are organized and disciplined: ARO has a disciplinary committee and no … riding trollies downhill is not allowed by the ARO … But if you were a trolley puller would you not take the downhills with a sense of relief and an adrenalin jag?  Samson makes the point that many recyclers are foreign nationals and there is a need to accommodate them into the system. Very significantly and impressively, the ARO works across nationalities. 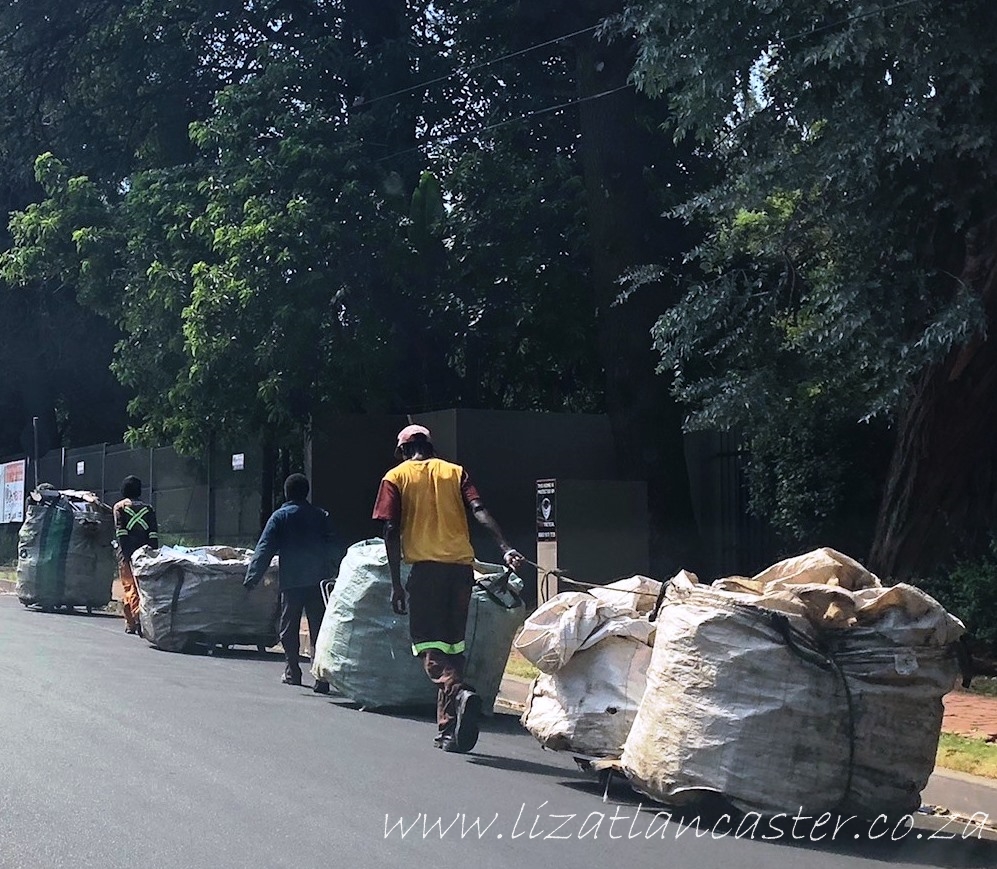 And they are not paid anything: no transportation; no labour;  no health benefits … nada. 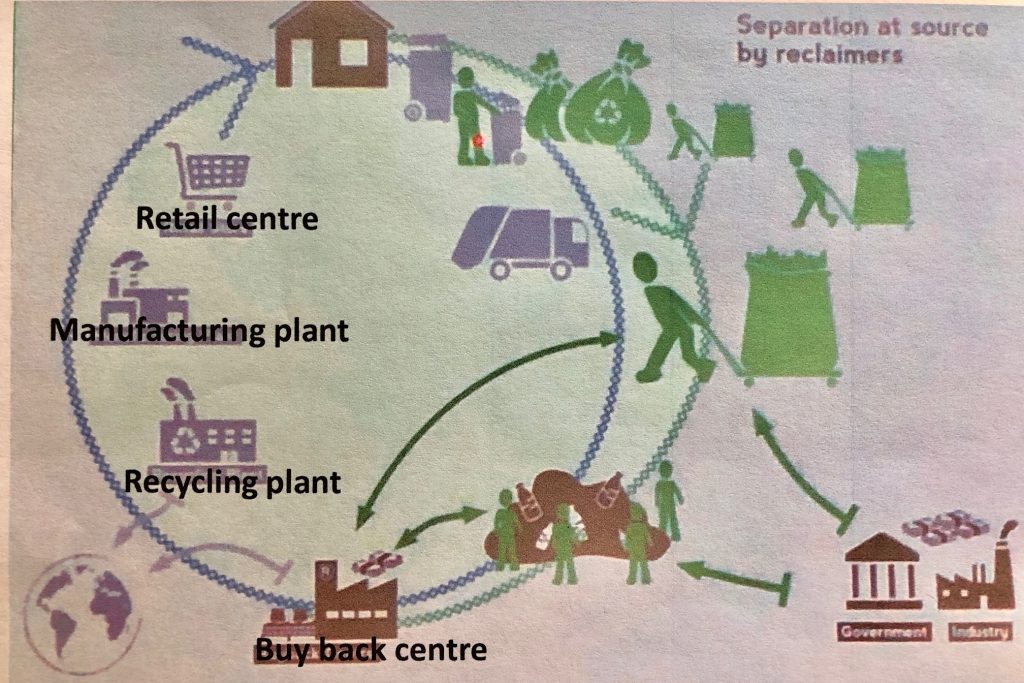 The African Reclaimers Organisation (ARO) has partnered with consumer goods manufacturer Unilever South Africa and the University of the Witwatersrand (Wits) in starting a pilot project to help reclaimers advance towards formal integration into the Johannesburg waste collection system. Specifically the project aims to increase collection rates of recyclable material from households and offices; improve the livelihoods for the reclaimers through recognition and compensation for their collection work; effect overall community behaviour change on waste management and perceptions about reclaimers.

And Bordeaux (an almost neighbour of Craighall and Craighall Park has also had the vision to get involved.

So what can you do as an ordinary citizen? You can … 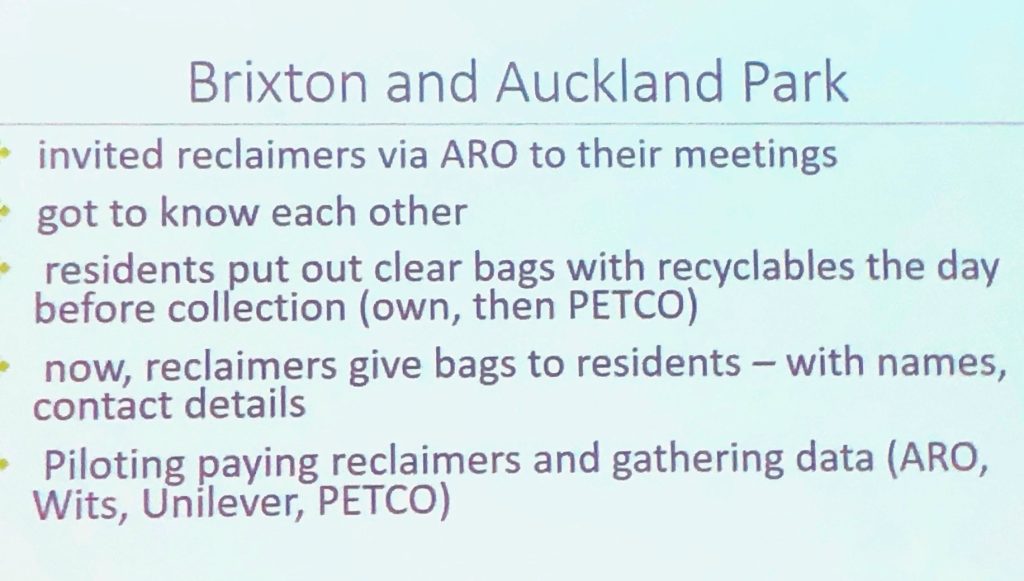 Crucial aspects which need to be addressed

Many reclaimers have local homes but they they can’t return to the sorting depot in time so need to sleep by their days’ takings for security. If secure storage space was provided, those who have places to live locally, would not have to ‘sleep rough’. There have been severe negative effects of private companies as reclaimers need to in the very early hours of the morning to beat the formal collections.

The negative effects on health and well-being are relatively obvious. India has a model of providing water points for example.

There are 2 kinds of reclaimers – those who work the dustbins in the streets and those who work at landfill sites. Samson notes that as the Save at Source system gets integrated there will be less for landfill reclaimers.  They will lose income and effectively be retrenched. There needs to some kind of social inclusion engagement where these reclaimers are trained for new work.

And finally (from me that is … Samson made many more fascinating points) industry needs to take responsibility for materials that reclaimers cannot sell.  There is a concept called Extended Producer Responsibility where the manufacturer of the product is made responsible for the entire life-cycle of the product and especially for the take-back, recycling and final disposal.

ARO wants to work towards getting their own recycling hub as well as equipment to convert waste material gathered to recycled materials.  ARO wants to work with communities to change perceptions of recyclers and to improve relationships with residents and businesses. So for example they ask resident associations to contact the ARO when there is a clean-up day and the ARO will get the recyclers in the area to help. In Bordeaux kids even had trolley rides from local reclaimers.

Samson and her team of researchers looked at other models globally, such as those instituted in Brazil and in India. (And sometimes India even acknowledges South Africa.) In Brazil, all public buildings have to give recycling to informal reclaimers; and in the case of both India and Brazil, local government contracts, pays and incubates reclaimers; plus they pay a top up service for items delivered to the buy-back centre.  (In Europe recycling is legislated which is why our comparative statistics are even more extraordinary).  And this despite the South African Government having historically ignored the issue of who is responsible for collecting recyclables and burying waste. The first time recycling was mentioned was in the 2nd Waste Management Strategy of 2011. [Samson 23/07/2019].

Samson’s  project is not based on a fly-by-night whim. A huge amount of consultation has gone into it with the various different stakeholders.

So this is a case of “Watch this space”.   Plus a blog on up-cycling coming “soon”.