City bus tours give best quick overview of a city

Even seasoned travellers who don’t like to be seen as mass-tourists, will take a guided bus tour when they first arrive in a big city. It’s an ideal way to get an overview – literally – from the top of a double decker (or diggle-dupper as my son used to call it!) as well as  having an explanatory commentary to the main sights and history of the city.  Joburg’s Hop-on Hop-Off bus tours have been going since January 2013 and have changed many visitors’ perceptions of the city. And now more exciting news!

The Red City Bus has come to Rosebank – a mere 3 km from Liz at Lancaster Guesthouse! 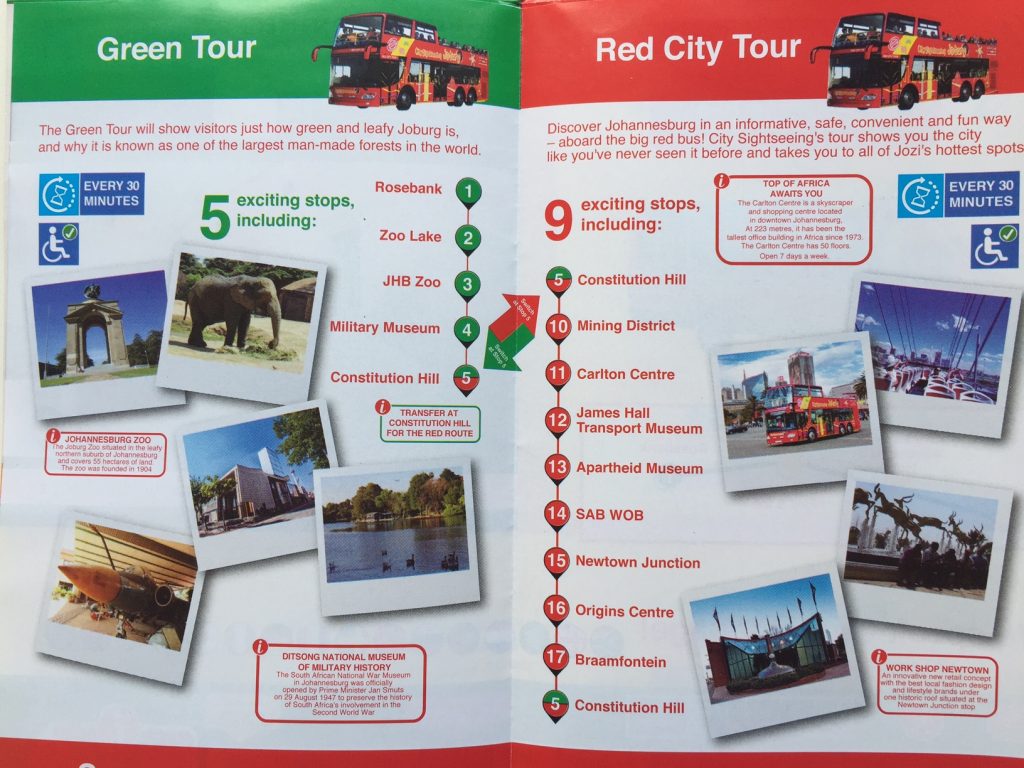 This is yet another recognition for Rosebank and the Parks and what this area has to offer in terms of tourist attractions.  The Red City Bus has added a Green route to its Red route.   The ticket office is now at the Zone in Rosebank very close to the Rosebank Gautrain Station.   The green tour leaves every 30 minutes starting at 9 am until 15.10 and goes to the Zoo Lake, the Zoo, the Military Museum and Constitution Hill.

At Constitution Hill you can transfer to the Red Route which follows a slightly different route from previously, with stops at the Mining District, Carlton Centre, the Apartheid Museum,  SAB  World of Beer, Newtown Junction, Origins Centre, Braamfontien and back to where you started at Con Hill.  On the Red Bus there is a good commentary available in 16 languages.   There is even a fun kids’ commentary channel.

From the Apartheid Museum, you can join a 2 hour Soweto extension tour on a small shuttle bus.  These buses depart every 60 minutes starting from 11.15 until 15.15. 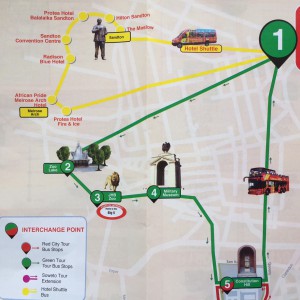 There are free hotel shuttles to the Ticket Office at the Rosebank Zone from several Sandton hotels:

You can buy pre-paid discounted tickets on-line or full price with debit/credit card on the bus. And there are various different packages you can purchase. Often guests at Liz at Lancaster take the 2 day pass so that they have time to spend at Constitution Hill, the Apartheid Museum as well as doing the 2 hour tour of Soweto. There are even walking tours plus a bike tour of Soweto can also be arranged.

So lots of options … all starting in Rosebank!