For many who don’t know the history and context of Chinese New Year it seems to be a never-ending movable feast of celebrations taking place over several week-ends.  There are celebrations held at  the Nan Hua Buddhist temple in Bronkorstpruit, Jozi’s ‘old Chinatown’ in Commissioner St and in Derrick Street in Cyrildene (Jozi’s ‘new Chinatown’).

When is Chinese New Year celebrated?

Unlike Western New Year which is celebrated on the same date very year, Chinese New Year varies according to the lunar calendar.  It falls on the second new moon after the winter solstice (or in South Africa’s case, the summer solstice). And, like Christmas in Western countries, in China it is a much needed winter holiday. Historically it coincided with the slack time on the farms before preparation for the new cycle of  spring planting.  Traditionally most Chinese were farmers and, although at least 56% of mainland Chinese now live in cities, many return to their rural family homes for Chinese New Year as the festivity is a time for family reunion and visiting relatives and friends.  So while in a rural context the Chinese traditionally celebrated the start of a new year of farm work, and wished for a good 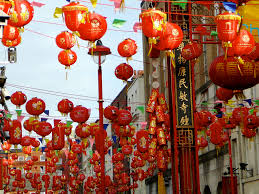 harvest, now it has evolved into celebrating the start of a new business year and wishing for profits and success in various vocations. Normally, the celebration will start from the New Year’s Eve and will last for around 15 days until the middle of the first month when celebrations conclude with the Lantern Festival. In modern China, working professionals will normally have 7 days of holiday including the weekend to celebrate.  As with New Year in most cultures, it is a time to take stock and plan afresh.  So for example, leading up to the celebrations, people will normally give their houses a thorough spring clean.   On New Year’s Eve families have a “reunion dinner” where people eat long noodles to symbolize long life; round dumplings symbolic of the full moon – a sign of the family unity and of perfection; and jiao zhi dumplings – shaped like ingots to signify wealth. 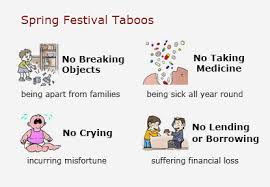 Interestingly in 1912, the newly-formed Chinese Republic, governed by the Nationalist party, changed the name of the traditional New Year holiday  to Spring Festival in order to get the Chinese people to switch to celebrating the Western New Year on 1st January.  When the Communists gained power in 1949 however, the celebration of Spring Festival was viewed as  too feudal as well as too religious – not proper for an atheist republican China. So under the Chinese Communist Party, there were some years where Spring Festival was not celebrated at all. But by the late 1980s Spring Festival started to become more popular and is now widely celebrated in China.

Nian – the monster who hates noise and the colour red

Central to Chinese New Year celebrations is a mythical monster or Nian – the word means both ‘year’ and ‘monster’. According to legend this monster lived under water and came out at New Year to attack villagers and cause general chaos and mayhem. BUT the wicked monster, like all mythical baddies, had an Achilles heel.  A wise old man told the villagers that he did not like the colour red and he hated noise. So villagers lit firecrackers and beat drums and cymbals and struck gongs to frighten him off. Plus they hung up red decorations like lanterns, calligraphic scrolls and cut-outs. Nian was sent packing and every New Year Chinese people celebrate the passing of Nian (and also make very sure that he doesn’t return).

So with the forewarning of lots of noise, I said to my friend when we went to ChinaTown in Cyrildene one year … ‘maybe we should take ear plugs’. Stalwart and stoic is my friend and accordingly gave me a withering look which told me in no uncertain terms that I was over-reacting and being pathetic. Well… to say that the lion’s dance, the culmination in a way of the festivities, was noisy, is not to put too fine a point on it.

Each restaurant, shop and business along Derrick Ave is visited by a large ‘dancing’ lion.  Operated by two people (one for its head and one for hind quarters and tail), he chases away evil spirits and brings prosperity and good luck.  And because evil spirits hate noise, he is accompanied by loud noise – and lots of it!  All shop owners hang an entire string of large firecrackers at their entrance and these get set off as the lion enters the shop.

He is accompanied by clashing cymbals, a gong and drums.   The dramatic climax of the lion dance is the “Cai Qing” or ‘Picking the Green’ where he looks for some vegetables which are hung in the entrance doorway. Hidden in the leaves is a red packet of money (hong bao) which is payment for the blessing. The lion keeps the red packet as payment for his blessing but ‘eats’ the vegetables and then scatters the leaves as if spitting them out to symbolize a fresh start for the new year and the spreading of good luck, abundance  and prosperity.

On the head of the lion is a mirror so that evil spirits will be frightened away by their own reflections , while the tail of the lion sweeps away bad fortune and unpleasant things from last year. So generally speaking you really do want a lion to come and eat your greens, spit them out again and take your envelope of money!

Next came the dragon dance. The dragon is another symbol of good luck in Chinese mythology (and is also a symbol of China itself).  A team of performers manipulated a long flexible dragon on poles in a sinuous undulating path. Chinese dragons are not like fire-breathing Western dragons who kidnap fair maidens. They are rather associated with life-giving forces, wisdom and benevolence.  We watched entranced as a man holding up a ‘Pearl of Wisdom’ on a pole enticed the Dragon to follow him between the crowd as if ‘searching for wisdom and knowledge’. And of course this was accompanied by the beat of a huge drum and the clash of symbols,

And then all settled down to tuck into amazing delicacies at the tables set out in the closed off street. Sadly we couldn’t stay for supper but this year for sure we will. There are so many restaurants to choose from but check  for some of the best.  So, when all large gatherings are allowed again, whether you go to First ChinaTown in Ferrierastown (1 Fox St) or Nan Hua temple in Bronkhorstspruit or Derrick St ; try to get to one of the festivities. It’s colourful, noisy and fun.

For more on Chinese Jozi.