A friend phoned me a couple of days ago to ask if I was OK. I said that I’d had a bit of a rough couple of weeks but that I was fine. ‘Why? ‘ I asked. She said: ‘You have been completely silent on social media’. Now I am not sure what that says about current styles of keeping in touch …. but  she is more of a social media buddy so I AM slightly forgiven, … aren’t I?

I explained that I had been away for just over 2 weeks in Ethiopia ( I feel a blog coming on … what a country! ) and that I had come back to bad flood damage in one of our units at Liz at Lancaster Guesthouse.  (A huge thank you to our Liz at Lancaster team as well as my excellent insurance broker for dealing with the initial crisis 24 hours before I returned home). For those who have stayed with us here at the guesthouse and in the Coral flatlet in particular, the back boundary wall behind the Coral studio flatlet collapsed in a massive rain storm, bringing with it a HUGE volume  of water in a flash flood. Because the courtyard wall and door held (good builders there!), it simply rose in the enclosed courtyard and then rose into the room itself.

So I have spent nearly 3 weeks since I returned from Ethiopia (that mythical, magical country of contrasts), getting quotes, seeing workmen, choosing new furniture and fabrics, etc.  Almost everything else has fallen by the wayside.

An exhibition buddy said to me yesterday: ‘Please don’t miss the Gideon Mendel exhibition at the Wits Art Museum‘. So despite being behind on admin and general  overseeing of all sorts of tasks and projects, I skived off with her to see ‘Drowning Worlds’.  Thank you Barbara, it is an  incredibly powerful and moving exhibition. And while I always knew that our minor hiccup in the ‘poor Coral flatlet’ was a small blip in the scale of mishaps, Mendel’s exhibition really brought home the devastation that water causes.

Mendel has spent 10 years documenting floods around the world. While this clearly needs to be seen within the broader context of climate change, his extraordinary beautiful photographs capture his subjects with dignity and allow for an intimacy, a humanity and a resigned acceptance, yet also a tragic empathy. Working with reflection and a stillness of water which belies its destructive power, he evokes paradoxes of reality and reflection, vertical surfaces and horizontal planes, solid architectural walls and the moving liquidity of water.

The exhibition is arranged in 3 parts:  the first section Floodlines includes photos that are enigmatic in their abstraction. In the image above left, only changes in colour separate vertical wall from horizontal water level.  For swans the water is their familiar haven and safety, and here in this flooded home, water means something so different.

The 2nd section of the exhibition entitled Submerged depicts flood victims. Using the same conventions throughout: frontal, composed, still, the subjects with a direct and unsettling gaze in the midst of their devastation – these large scale portraits depict stoicism, resignation and raw tragedy.

Terence’s red eyes indicate a strong grown man who has been reduced to tears, yet in the photo he composes himself and puts a protective arm around his mother. 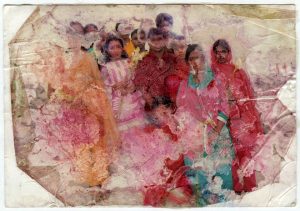 The 3rd section Watermarks is equally poignant.  People affected by flood damage know that their possessions have been ruined but also at some level that they can be replaced. Photos and memorabilia can’t be. Mendel saw people returning to find records of precious memories. He then sought out flood damaged personal snapshots (some given by those affected by floods).  The ‘bleeding’ caused by the interaction of water and the liquids used in the photographic development process, turns these images (blown up to large scale by Mendel) into ephemeral palimpsests of past memories.

This exhibition, both photographic stills and the 40 minute video, is a sobering, thought-provoking and depressing reflection of the effects of severe climatic events as well as the stoicism and tenacity of those affected.

Mendel has documented 13 countries since 2007:

The exhibition is on until 25th February 2018 so there is plenty of time to see it. Don’t miss it.

And watch this space for a newly refurbed ‘Coral’ flatlet.  The name might take on different associations!!

2 thoughts on “Climate change? Temporary weather extremes? Whatever … the effects are devastating.”