Delta Park, 104 hectares of open park land, is just 5 blocks from Liz at Lancaster. The area now known as Delta Park was part of the  farm Klipfontein in the 19th Century. In 1902 it became a grazing area for cows as part of William Rattray’s estate.   Delta Park as we now know it, owes its existence and its name to the expansion of Johannesburg’s sewage scheme during the 1930s when rural farmland on the outskirts of the city was transformed into the Delta Sewage Disposal Works. 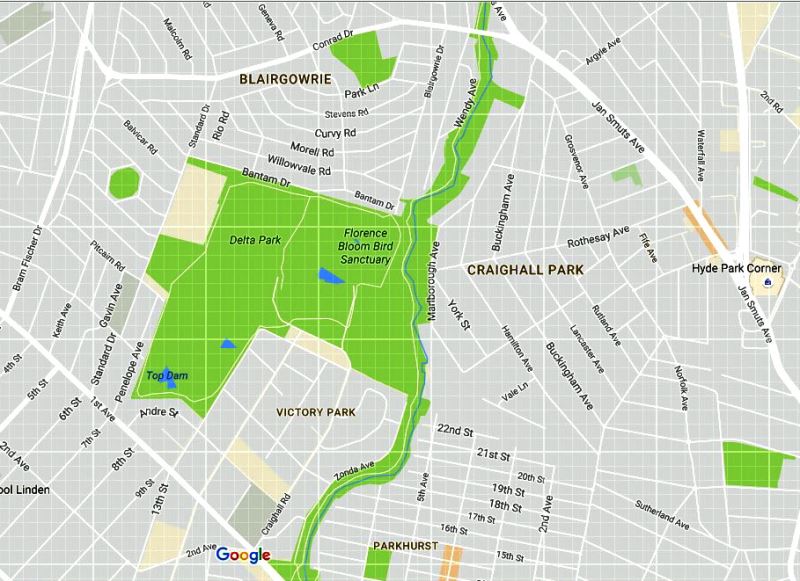 From 1906, Johannesburg’s southern suburbs were connected to a waterborne sewage system which was gravity fed through a network of huge underground sewers to a Council-owned farm at Klipspruit, in an area of what was to become Soweto.

The northern suburbs however, up until the mid 1930s, relied on French drains, open tanks and external lavatories with a bucket system.  (Many of the sanitation lanes which provided access for the horse-drawn sanitation carts still survive in suburbs like Parkview).

When, in 1931, the Johannesburg City Council decided to implement a sewage system for these northern suburbs (north of Johannesburg but south of Sandton), they chose four sites in valleys that would allow gravity sewers to run from suburbs in the catchment areas of the rivers of the Witwatersrand.  Neutral names (ie non suburb-specific) with classical connotations were chosen:

What made Delta different?

Delta was unique in two respects: the main works were housed in a single building (which is also a good example of Johannesburg Art Deco and now houses the Environmental Training Centre) and the method of sewage disposal was experimental at that time.

It was not too long before it became clear that these sewage plants would not cope with the needs of Johannesburg’s rapidly increasing population. By the end of the Second World War expansion of Bruma, Cydna and Delta was not viable as they were surrounded by housing.

So  the City Engineering department needed to look at establishing a larger plant to the north of what is now Sandton.  However Northern Disposal works (at Diepsloot), with its huge pipeline which required both bridges and tunnelling to keep its gravity-feeding at the optimum, took a long time to build.  (The luxury gated community gets its derogatory nickname of D[r]ainfern from its proximity to and outlook on this massive pipe-line.)

It was only in 1959 that the Northern Disposal Works began to accept any volume of sewage from the other treatment plants. Delta finally closed at the end of June 1963.

…… And now Delta Park home is used extensively by dog-walkers, joggers and runners.

So this important green lung has morphed over time to serve the community in many different ways.

One thought on “Do you know where Delta Park gets its name from?”