South Africans are rugby mad and this is no exception when it comes to school boy rugby.  I’m a philistine as far as this game is concerned, and I horrified my sons when I said, after 2 years of watching them play rugby, that I had only just realized that in order to move forward you had to pass the ball backwards.  As an ex hockey-player, I thought this was very illogical and really quite peculiar. They did not speak to me for weeks and I am not sure have forgiven me fully yet!

So it’s with great excitement that schools around South Africa and Jozi rugby fans are looking forward to the Easter Rugby Festival hosted by Saints, St Johns and KES.

We have a very high standard of schoolboy rugby and the annual Festival is a highlight on the schoolboy rugby calendar. So best get started on planning your stay in Joburg now and book at Liz at Lancaster. We are from 9km from St Johns and KES and under 8km from St Stithians.

The festival takes place over 3 days: Thursday 28th March, Saturday 30th March and Monday 1st April and the programmes below show that all the major boys’ schools are included. In addition to the top rugby schools in Gauteng, there are schools from Cape Town, Eastern Cape, KZN, and Namibia. And there are 2 rugby academies taking part: Eye of the Tiger and Lions. The Eye of the Tiger Rugby Academy (EOTT) is a South African, Non Profit Organization (NPO) focusing on previously excluded communities and schools, especially from rural and townships areas. The 2018 intake include nine SA Schools players and a host of talented youngsters from mostly Gauteng based schools.  The Lions, or Lions Master Coach Rugby Factory, to give it its proper title was launched at Laerskool Kenmare in Krugersdorp inJanuary 2018.

Sadly, some of the ‘old faces’ will be missing this year: Pretoria Boys High, Wynberg, Westville, DHS, and St Benedict’s are not taking part.

The Saints Rugby Festival is part of the Saints Sports Festival which grew from a rugby festival in 1984 to include cross country, football, hockey, netball, squash, and tennis. In 2017, over 50 000 people attended the events which were covered on SuperSport Blitz.

Due to the addition of the Prep schools’ festival St Stithians now refers to it is as the Saints Sports Festival to include both the Prep and College festivals. Sports include cross country, football, hockey, netball, squash, tennis, and of course, rugby. As with St. John’s the sponsor is Standard Bank.

And families are catered for as there are food stalls, entertainment as well a children’s play area, a youth chill area, and a hospitality tent for over 18s.  Tickets are available from St Stithians College or at the gate on #SaintsFest2018 days. They cost R40. 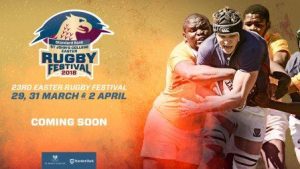 KES or King Edward VII High School in Houghton hosted their first rugby festival in 2002 to celebrate the school’s centenary and it was such a success that it’s become part of the School’s annual calendar.