What’s not to get passionate about?  – a chance to visit Rome to meet up with a long -time friend and ex-Wits colleague Michael and various of his family. But just as exciting as the idea of spending time in Rome, is the fact that Michael is an art historian and had been asked to write on Kentridge’s latest magnus opus located on the banks of the Tiber.  Triumphs and Laments is Kentridge’s largest public project to date and the largest public art project in Europe. Using his very particular visual language and his technique of creation through erasure (more of that later), Kentridge subverts and questions traditional representations of the historical past. Kentridge who has achieved such international fame (he was named by Vanity Fair in 2013 as one of the six greatest living artists in the world), grew up in Johannesburg and despite his international profile still lives and works in Johannesburg. Given the fame of our Jozi boytjie (how he would hate that appellation!!),  I was surprised on regaling guests on my return, that so few had heard of this colossal project (which really does sit easily with the massive scale of much of Roman public art and ruined remains).

Where and what is Kentridge’s Triumphs and Laments?

Between two bridges across the Tiber (the Ponte Sisto – a 15th century pedestrian bridge) and the Ponte Mazzini (built in 1908) is a relatively straight half-kilometre stretch of the river bounded by a 13 metre high travertine embankment.  It is here that Kentridge’s procession of more than 80 figures, each over 10 metres high has been ‘reverse graffiti-ed’ on the massive western river wall.

Starting with sketches, then moving on to charcoal drawings, then to ink drawings and small experimental stencils and finally to the massive 10 meter-high stencils, Kentridge was then ready to set his team to work on placing the stencils against the dark polluted limestone walls of the Tiber.  The accretions of grime and ‘traditional’ graffiti were washed away or erased through cleaning, (with massive high-pressure hoses) so allowing the silhouetted procession of Kentridge’s iconic figures to emerge – the dark areas of the figures defined by the dirt that remained and the light areas by the parts that had been cleaned. ‘In a few years, the images will fade, so that a new history can be drawn again. It will be sad, but poignant, to watch it dissolve over time.’ (ArtForum.com 21/04/2016)  Part of its meaning and significance lies in its ephemeral nature which is so counter to the permanent materials traditionally used for long-lasting historical monuments.

History of the project

The project was officially opened on 21st April 2016 – the 21st April being the apocryphal date of the founding of Rome. The project has been 12 years in the making starting with Tevereterno, a non-profit organization getting permission from the city to work in this downtown section of the Tiber (which they named Piazza Tevere) to create a dedicated public space for contemporary art.   This regeneration and public space project (funded by corporates and private individuals) has been driven by architect Tom Rankin (director of Tevereterno) and Kristin Jones , a New York based artist. In 2005, Jones made Piazza Tevere’s first public art project in the form of a frieze of 10 she-wolves using the same method as Kentridge in his Triumphs and Laments – ie cleaning parts of the limestone so leaving the dirt to form the images.

As its title suggests, Kentridge’s project is no triumphal heroicization of Rome’s grand past,  magnificent deeds and great rulers.  Here a triumphal march meets a carnivalesque ‘ship of fools’.  Kentridge says –  ‘It’s a South African perspective on Roman history that takes into account contradiction, vainglory, utopian idealism, loss. (ArtForum.com 21/04/2016) And “Every triumph and glory is someone else’s lament and shamefulness.”  Kentridge had a team of researchers working for him on this project and they built up a data base of some 500 images from which Kentridge chose 80. There are soldiers, popes, kings, philosophers, martyrs – many of whom are associated with less proud moments of Rome’s history.

So symbols of Rome’s glorious past are constantly questioned. For example the winged Goddess Victoria is presented in 3 forms: proud and strong (the first image seen if approaching from the Ponte Sisto); then in the middle of the procession the same figure is shown disintegrating;  & at the Ponte Mazzini end of the frieze she is represented as being reduced to a pile of rubble .  (There is no beginning and end to this procession of figures, no chronological structure. Images work in fragmented juxtaposition with no coherent narrative.)

References to slave galleons on the Mediterranean are conflated with refugees landing at Lampedusa.  Figures fleeing with menorahs reference Rome’s historical Jewish ghetto close-by on the opposite bank of the Tiber. Many of objects that form part of Kentridge’s familiar iconography become imbued with a particularly Italian connection: the espresso coffee machine; the sewing machine could be a Necchi brand.

And many of the figures are drawn from art historical sources which have a particular Roman connection such as Michelangelo’s Prophet Jeremiah from the Sistine Chapel; Bernini’s St Theresa in Ecstasy; part of Mantegna’s Triumph of Caesar, originally for the Gonzaga Ducal Palace in Mantua and now in Hampton Court Palace; three figures taken from the Arch of Titus, carrying the treasure of Jerusalem; the Crucifixion of Peter (seen below), who according to Christian tradition was crucified (upside down) in Rome by Nero. 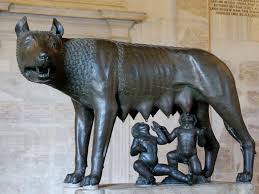 As seen above left, Kentridge has represented the she-wolf (who is said to have suckled the twins Romulus and Remus) with 2 pitchers under her teats.  When we stopped for a cup of coffee at a typical Roman cafe – Caffe Braccio – my colleague Michael pointed with wry amusement to the sugar packet which showed 2 coffee cups under the mythical wolf’s belly!   Just the kind of image that would have sparked Kentridge’s replacing of the founding twins with 2  pitchers.

There are iconic images from Italian cinema conflated with historical events. Some of these are subverted with wonderfully ironic humour.  One such image is that of Marcello Mastroianni and Anita Ekberg from La Dolce Vita (1960), represented in a bath tub under a shower instead of in the Trevi Fountain. Delicious in its irreverence!

We were fortunate enough to see the exhibition with works related to Triumphs and Laments  at Macro (Museum of Contemporary Art) in Rome – on show from 17/04 – 02/10/1916. On exhibition was:

The role of erasure

Kentridge is no stranger to the process of creation through erasure. In his early animated films (the Felix and Soho series), he makes a drawing, films it, erases parts of the drawing and makes changes, and films it again (each change gets from ¼ second up to a couple of seconds of screen time).  In this way a single drawing is altered and filmed to produce a moving image. [An October 2018 addition: At the Aspire Art Auction  recent sale, a drawing from Stereoscope 1998-9 was sold for a world record for a Kentridge drawing (R6.6 million).]

Similarly using cut-outs have long been part of Kentridge’s visual language. The nearest I can get to owning a Kentridge image is an exhibition poster from a 2000 exhibition in Sydney which hangs in the guest lounge at Liz at Lancaster!  The cut-out images in this poster such as the bent figure carrying a burden on his/her back;  the maimed figures; and the shower head – all reappear as part of the visual language in Triumphs and Laments.  Kentridge also often uses cut-outs in shadow processions as back drops to live theatre, in his operas, and along with shadows of live actors and dancers in multi-screen film installations such as the recent installation Notes Towards a Model Opera at Goodman Gallery .

And one of Jozi’s iconic public sculptures is Kentridge’s Firewalker installed at the end of Queen Elizabeth bridge as one enters Joburg CBD proper. Here metal plates replace torn pieces of black paper and form a 3D image which only coalesces into coherence when viewed from a particular viewpoint.
I cannot believe just how privileged I was to have been able to see Triumphs and Laments which, because of the medium, is ephemeral and transitory; to have had the benefit of Michael’s knowledge and insights in the reading of the images; and to have experienced the sublime location, context and scale of this monumental work on the banks of a beautiful river in the quite extraordinary city of Roma. Unforgettable!

My one sadness is that this public art project which is part of a regeneration project aimed at enlivening and revitalizing a public space, seemed to go largely unnoticed by locals (joggers and cyclists) and tourists alike. The latter were focused on taking selfies on the Ponte Sisto against the backdrop of St. Peter’s in the distance. 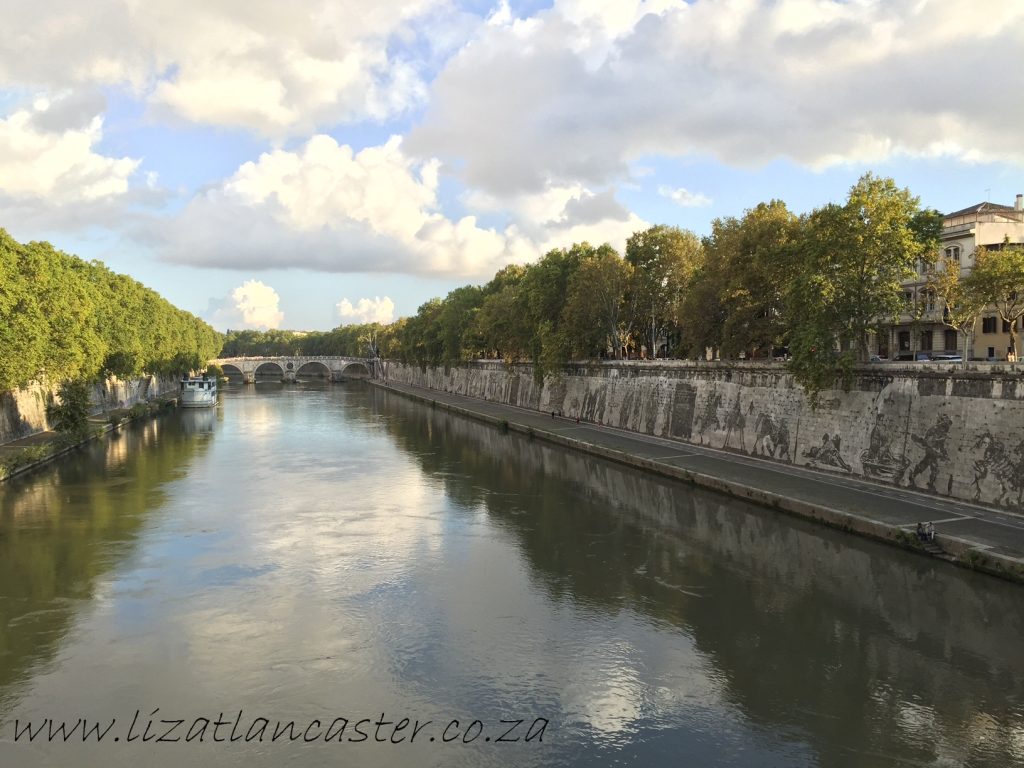 One thought on “Every winner has a loser : William Kentridge’s ‘Triumphs and Laments’ on the banks of the Tiber in Rome”