Another addition to Liz at Lancaster’s art collection

The Turbine Art Fair turned out to be more expensive than just a cup of coffee and meal at the outdoor cafe.  I couldn’t resist a small scale work from Hannelie Coetzee’s enigmatic African Migratory Locust series.

The work comprises the trace of a real locust – it’s formed by a pressed impression of the insect from which a delicate pink translucent watercolour bleeds outwards. Source: www.lizatlancaster.co.za

Born of the idea of  promoting controlled burning as beneficial for South Africa’s savannah ecosystems, Coetzee 2017 #FireGrazer artwork, titled Locust & Grasshopper, is a follow-up and re-burn of the 2015 artwork Eland & Benko. These performance pieces entail the controlled burning of huge images created by Coetzee on approximately 5 hectares of grass veld.   The new 2017 image overlays the 2015 image much like re-imprinting something. Coetzee see it as the landscape ‘remembering’ the previous burn. 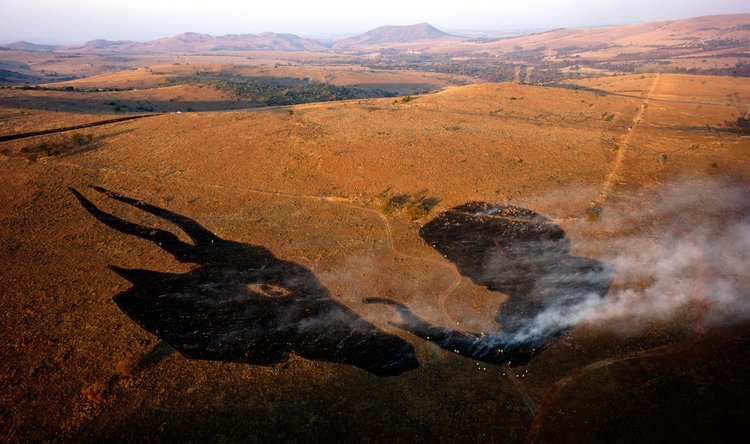 Eland and Benko 2015 (Benko is the name of a young boy) Source: hanneliecoetzee.com 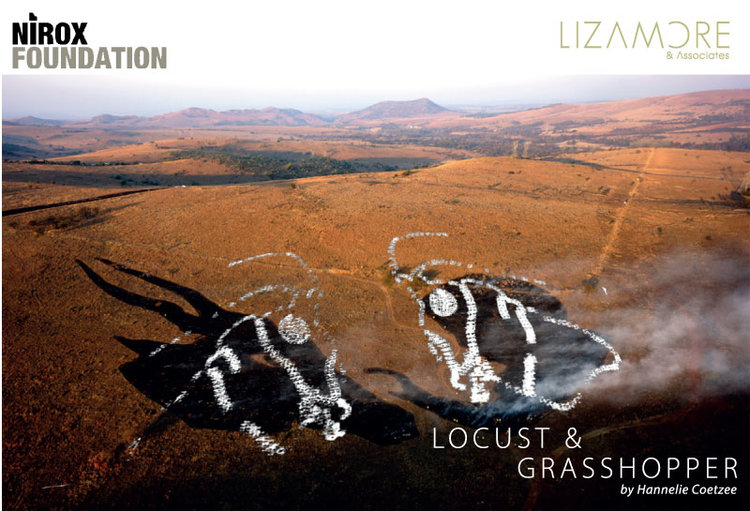 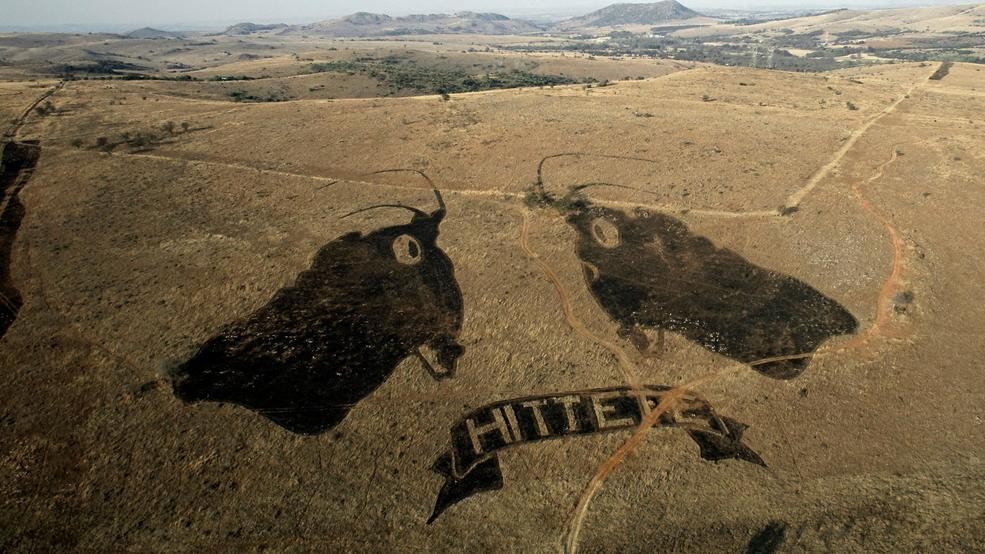 Collaborating with Sally Archibald, a Wits ecologist, the 2015 –2016 research examined whether small, managed fires create more diverse, more productive grassland communities by altering how antelope use the landscape.  Wits entomologist James Harrison joined the team for the 2017 burn where the researchers are examining wider biodiversity responses to the fires and more specifically the activity of particular grasshopper species which are adapted to and prefer the short-grazed patches that the burns create.

Day of the burn

So it came about that on a warm winter’s day nearly 2 months ago a couple of friends and I headed out to the Nirox Sculpture park  in the Cradle for a 3km hike to watch a prescribed performative savannah burn of images of a grasshopper and a locust seared into the landscape at sunset.  The hike started a little late as permission had still not been granted for the burn to go ahead. With a slight breeze it was declared a Red day until the very last minute – in fact many of us were already on our way to the site when news came through that the restrictions had been lifted and the Fire Chief had granted the permit.

Coetzee explained that ‘hittete’ (an expression with no literal translation in English) means something like ‘almost’ or ‘not quite’. This adds resonances to the ephemeral nature of this site specific work as well as the shifting policies on significant environmental issues. Source: www.lizatlancaster.co.za

The burn starts on the left image. Source: www.lizatlancaster.co.za

It turned out to be a glorious evening, watching the organized discipline of the firefighters from Working on Fire as they lit the various parts of the images in a controlled and staggered way.  When the flames had died down, the huge insect heads were burnt into the veld and the smell of veld fire hung in the air, we gathered our jackets, beanies and torches, and started the walk back to the Nirox Sculpture Park pavilion in the fading light.Seeing the snaking line of moving torchlights dotting the nightscape was an artwork in itself. Lizamore and Associates had mounted an exhibition of Coetzee’s works arising out of the 2 #FireGrazer performance pieces. And to end a perfect afternoon we enjoyed a delicious supper and a glass of wine in the Nirox Sculpture Park.

Flames have died down, the firefighters have left and a pall of white smoke hovers over the blackened images. Source: www.lizatlancaster.co.za

2 thoughts on “#FireGrazer 2017 Locust and Grasshopper”