Lots of choice for #FirstThursday

It’s #FirstThursday tomorrow 7th July when many of the art galleries stay open late – both in Braamfontein and along the Rosebank Art Mile.  First Thursdays started as a Cape Town initiative and is gradually taking off in Joburg. But take extra care walking between galleries in Braamfontein – there was a report of a mugging at last month’s #First Thursday. Hopefully the Braamfontein Business Precinct will take note and will have provide extra security.

Liz’s Pick of the Week is the exhibition at Wits Art Museum of Jack Ginsberg’s collection of some 700 Battiss’
artworks and related material. This promises to be a great exhibition. It opened last night 5th July and runs until 9th October.  And while at Wits you can pop down to Origins Museum and see the related Battis exhibition – his rock art work.

Showing at Stevenson Gallery in Juta St is the Standard Bank’s 2015 Young Artist’s Award Winner, Kemang Wa Lehulere.  He has also been named the 2017 Deutsche Bank Artist of the Year, and has a solo exhibition opening at the Deutsche Bank KunstHalle, Berlin, in March.  Tellingly he says that his work has been received better internationally than in South Africa. In his paintings, drawings and sculptures, he transforms and morphs forms into different objects which then becoming free floating signifiers of meaning, de-linked from their original context. The exhibition runs until 15th July.

Moving further north to Rosebank – Goodman Gallery‘s 50th Anniversary exhibition closes on 9th July.  Several of the stalwart avant-garde artists have works on display in this tribute to Goodman’s development of a stable of critically aware and engaged artists, many of whom like Kentridge, have achieved international recognition. 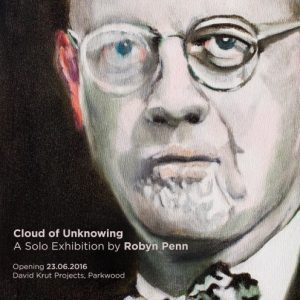 One of my favourite artists is showing her work at David Krut. In Clouds of Unknowing,  Robyn Penn juxtaposes images of clouds with portraits of climate-change dissidents to critique and comment on the climate change issue.

At nearby David Krut Project, there’s an exhibition which introduces a 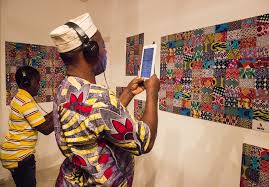 really interesting concept: here visitors can download an app on their smart phone which enables them to view, with auditory commentary, the works of  10 contemporary artists in the collection of the  Zinsou Foundation for Modern Art in Qidah in Benin.  How cool is that? This exhibition opens on 7th for #FirstThursday and runs until 1st August.    ‘Wakpon’ means ‘come and see’ in Fon, the most widely spoken local language in Benin.

At Lizamore & Associates there are two solo exhibitions by Cape Town based artists: Orda716 by Kilmany-Jo Liversage and Attachments and Separation by Uwe Pfaff. I know of neither of these artists so look forward to seeing their work. 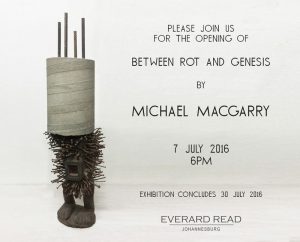 Michael McGarry’s exhibition Between Rot and Genesis opens on Thursday 7th at Everard Read Gallery until 30th July.  Michael MacGarry is a multi-award winning filmmaker and visual artist and (mea culpa), I have always found his work quite inaccessible. I am not sure the gallery blurb is any more enlightening  so will be interested to see what this exhibition offers.

At Circa on Jellicoe Blessing Ngobeni

The song of the Chicotte  also opens on Thursday night. The chicotte is known as the sjambok in South Africa and Ngobeni uses the chicotte as ‘a metaphor for slavery in general – not just historical slavery but slavery of the mind, the spirit – in the country, our relationships, ourselves. We brutalise ourselves and each other, and perpetuate the patterns that we have inherited: the sins of the fathers are, more often than not, still being visited on their children.  …. In place of these old patterns, Ngobeni urges us towards a new vision of the world – one “not ruled by the hyenas of old, who wear different guises and inflict the same punishments”.’ (Gallery Website)

Down the road at Gallery Momo until 18th July is a fascinating exhibition of Congoleses artist Maurice Mbikya‘s works. Entitled Mupia-Mupia which is a Luba word meaning ‘new and shiny’, Mbikya foregrounds the importance of the role of clothing

in Congolese society as a signifier of status, identity and calling attention. In virtual space people construct digital identities and it is this interface between the aesthetics of fashion and the politics of digital identities that Mbikya examines. The artist used obsolete technological parts, specifically computer pieces as a source material, and reshapes these into fashion items.

So – there is plenty to choose from this #firstThursday. Liz at Lancaster Guesthouse has guests who come in from Muldersdrift for #FirstThursday. Not wanting to drive the distance home late at night they stay over at the guesthouse