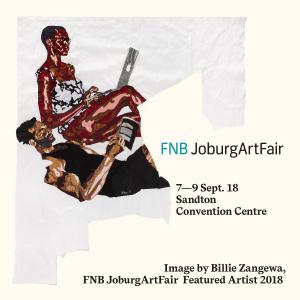 I’m not a great fan of attending exhibition openings – too many people and too little art, but I was asked to be a friend’s ‘Plus-one’ at the opening evening of the FNB Joburg Art Fair at the Sandton Convention Centre a few weeks ago. I couldn’t turn that down particularly as I was not sure that I would get back to see it.

There was way too much to see in one visit so I did make it back if not only to experience Haroon Gunn-Salie’s Senzenina-Reflection Space, an audio installation in a darkened booth. The 15 minute soundscape recalls the horror of the events of 16 August 2012 – the Marikana Massacre.  Gunn-Salie’s soundscape is dramatic and sobering. Soothing rural sounds of cowbells and the murmuring of cowherds; the relentless brutal stuttering of underground mining jackhammers; the seemingly endless clanking and creaking of the cage bringing miners to the surface; site recordings from the catastrophic events with police opening fire; ending with hauntingly sung lamentations by the miners.  It’s impactful, gut-wrenching and oh so powerful.  It certainly needed some time to regroup emotions – the reflection embedded in the title of the work.

So here are a few visuals of some of the other works that spoke to me:

Yayoi Kusama is the famous Japanese avant-garde artist who found a way to deal with her mental illness by making art.

Chris Soal: To know that one is dreaming is to be no longer perfectly asleep

At Goodman’s booth, along with many of the other really big names like Kentridge, Bell, Van Den Berg etc, was one of Yinka Shonibare’s sculptures. Do not miss Yinka Shonibare’s exhibition Ruins Dedcorated at Goodman Gallery which closes on 6th  October. It includes an extraordinary installation of over 4,000 books covered in African style textiles with names of various authors who are either African or have written about Africa and aspects of African cultural life.

In other works on Ruins Decorated,  Shonibare re-imagines Admiral Nelson’s death, drawing on images taken from history paintings but where Nelson is represented in clothes made from African textiles.

And Shonibare’s  video installation is achingly beautiful, set to sounds of an exquisite rendition of Verdi’s Addio Del Passato.

And finally there was a series of photographs on show at the Joburg Art Fair by the American artist Hank Willis Thomas, photographs which have proved to be very controversial and have been recalled from sale and removed from the market pending legal proceedings.  There is a lot of debate in the press and social media about these works.  Thomas takes archival photographs shot by famous South African photographers during the struggle years and manipulates them through scale, colour and the technique of retroflective screenprinting.  The effect of this technique is that when viewing Thomas’ photograph with the ‘naked eye’ only part of the subject matter is fully legible (bottom left)  but with flash photography the ‘hazy’ part of the photograph becomes fully legible (bottom right).  Or put another way: the black-and-white compositions are fully revealed only ‘when the viewer shines a light on the work’.

One of the many questions raised by the debate around these images, is whether the use of the original photographs amounts to plagiarism or not: ie whether sufficient changes have been made by Thomas in order to justify Thomas’ works being classed as Thomas’ own artistic property. And to what extent in appropriating from another’s work does the artist need to acknowledge the original maker?  Thomas however, asks (quoted by Kinsella in Artnet.com): ‘Who has the right to represent the historic document of a public event and in what way?’  While in some of the works, Thomas’ has taken a single photograph by a South African photographer and in others Thomas has montaged two historical photographs into a single work.

It seems that this case if it goes to court, might set a very important legal precedent around issues of appropriation, plagiarism and acknowledgement and it will be very interesting to see how it plays out.

But to get to the point of this very long blog post. Still time to get to Bronwyn Lace’ exhibition at Everard Read (also showing is Tamlin Blake’s Stealing Beauty). While there you can see Galia Gluckman’s metas (boundaries) across the road at Circa. And Yinka Shonibare at Goodman is a must-see. Plus of course DON’T miss next year’s FNB Joburg Art Fair. It’s a great window on Southern Africa and Africa’s artistic creativity.