The Confed cup went very well with Sepp Blatter ending up giving SA’s event a 7/10. One of the big criticisms was the transport to and from the stadiums and this was without the difficulties of getting from A to B without your own vehicle.  But things are happening to change this:

Construction of the Gautrain Rapid Rail started in October 2006. Go to their great website for info and photos of this extraordinary engineering feat : www.gautrain.co.za . The first phase  between OR Tambo International Airport and Sandton will be completed before the start of the World Cup in 2010. The second phase between Johannesburg and Pretoria will be completed by March 2011 with a trip from Johannesburg Park Station to Hatfield taking 42 minutes   In addition to these 5 stations, there will be  stations at Rosebank, Marlborough, Midrand, Centurion and Rhodesfield (near O.R. Tambo)  which will link 80km of rail .

While the Gautrain will serve existing vehicular commuters (up to 300,000 a day on the N1 between Johannesburg and Pretoria) it will also serve travelers and tourists landing at O.R Tambo.  It will operate for 18 hours a day, with a train running every 10 minutes in each direction and a carrying capacity of 4000 people in each direction at peak and a total of 120,000 a day.  Initial fares, as determined before construction on the project started in 2006, was roughly R20 for a one-way ticket between Johannesburg and Pretoria stations, R12 between Rhodesfield and Sandton stations, and R80 between the OR Tambo International Airport and Sandton stations. The Gautrain will use 125 buses to feed commuters to and from the train stations 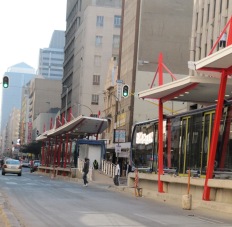 The Bus Rapid Transit (BRT) system includes improvements to infrastructure, vehicles and scheduling. Based on the successful solutions to public transport in Bogota and Beijing, it uses dedicated bus lanes with stations every half kilometer. Johannesburg’s first Bus Rapid Transit (BRT) station was officially launched in November 2008 yesterday in Joubert Park by transport minister Jeff Radebe.
The BRT or Rea Vaya in JHB will offer three different levels of service:
o Trunk buses:  – with a capacity of 90 passengers they will only travel on the designated centre lane trunk routes.
o Complementary buses: with a capacity of 60 passengers they will be able to pick up passengers at stations on the trunk routes and will also be able to operate on the kerbside.
o Feeder buses: with a capacity of 32 passengers, will bring people from the outer areas which don’t have direct access to the trunk routes so ensuring  fast connections from homes to main routes
Catering for an intended 430,000 commuters a day it will run between 5 am and midnight, with buses running every one to three minutes during peak and every ten minutes off-peak. Park-and-ride facilities will be established to encourage business professionals to use the system.

The plan was to have the first phase from Soweto to Ellis Park (26 kms and 20 stations) finished in time for the Confederation Cup this June 2009.  Although approximately 550 taxis would be taken off the road, the government stressed that the introduction of the bus system would not result in job losses, as all taxi drivers could be retrained as bus drivers. In March 2009 however, angry taxi drivers and operators staged violent protests against the implementation of the BRT system.  Their concerns were around ownership in the system rather than employment.  Jacob Zuma then promised to delay the implementation process until August with a view to addressing these concerns. In the mean time a short term solution for the Confederation Cup was found by the City and the local taxi industry for a combined bus-and-taxi operation known as ITransie (See Liz at Lancaster blog post of 13 June) to ferry soccer fans to and from Ellis Park.  This initiative used a combination of 77 Metrobus and Putco buses, along with 470 taxis, all branded for the event, to ferry fans from four park-and-ride stations around Johannesburg.

The further phase of the BRT system is due to be ready for the World Cup. It will comprise 86km and 102 stations, from Dobsonville in Soweto, through Parktown to Rivonia in the north of Johannesburg.  By 2013 the final phase comprising 122 kms and 150 stations should be finished.

So over the next 4 or 5 years there should be major transformations in the transport system. Watch this space for updates.