Yes .. 6 months have passed  since our last blog on what to do with small children in the Parks during the holidays … only now it’s midsummer with quite a few places closing for Christmas through to the new year.   Check  for many of the playgrounds, local child-friendly eateries and parks. Both Delta Café  and CrazyKidzFarmyard will close on the 23rd till the new year. Serendipity will likely close the 18th until the new year.

But many attractions stay open all the way through : all the parks and botanical gardens;  the Johannesburg Zoo; the ducks don’t move from the Zoo Lake; and the Bird Park at Monte Casino is open daily. There is a also great kids playground at the Monte Casino Bird Park and they have a range of other animals like lemurs, meerkats, chameleons, etc. It’s really nice for young kids.

Don’t forget the great playgrounds at Delta Park and at Zoo Lake where there are wonderful swings, slides, jungle gyms and fabulous climbing structures.

LoryParkZoo in Midrand is small with close viewing of animals so good for younger children. I don’t like any wild animals in zoos but this privately owned zoo (open throughout the holidays) is well-run and the animals seem in good physical condition.

If you want to go further afield, the Lion and Safari Park on the way to Hartebeespoort Dam has something for all ages. Older children will enjoy the ‘safari rides’ into the game areas while younger kids are more than happy with the fabulous playground plus bunnies, meerkats and 2 giraffes who take copious amounts of food with mesmerizing prehensile tongues.

And another fun day with small kids is the cable car ride to the top of the mountain overlooking Hartebeespoort Dam (also further afield) … it’s a whole new perspective for a toddler to look down at the world!  It is also open every day, even Christmas Day.

CHILDREN’S THEATRE IN JOBURG OVER THE CHRISTMAS HOLIDAYS

If it’s theatre you want to see make sure you go before Christmas as most only run until then … but there’s lots on. 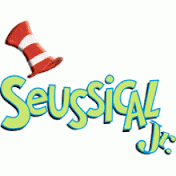 SEUSSICAL THE MUSICAL  AT THE JOBURG THEATRE (PEOPLE’S THEATRE)

Showing at Joburg Theatre (People’s Theatre) in Braamfontein is Seussical the Musical  is the Broadway Show based on the wonderful Dr Seuss books.  Kids can meet   Horton the Elephant and Cat in the Hat and enjoy old favourites like Green Eggs and Ham!  Shows daily at 10.30 and 2.30 Wednesday to Saturday until 24th December and tickets are R135 each.

And as we are in for rhymes and alliteration you can continue the theme with Mr Popper’s Penguins showing at the Children’s Theatre (3 Junction Ave Parktown) until 23rd December.   This is a musical based on the novel by Richard and Florence Atwater.  A second production showing at the Children’s Theatre which is sure to be a hit with the younger children is Thrice upon a Time where puppets enact 3 favourite children’s stories: Goldilocks; The Billy Goats Gruff and The Three Little Pigs.  From 15th -22nd December.  Shows are on Tuesdays to Sundays at 10.30 and 2.30. 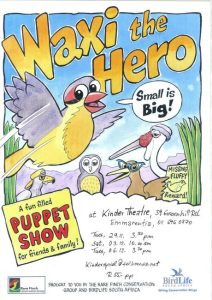 At the toy shop, Kinderspiel in Emmarentia (39a Greenhill Rd) they have a children’s  theatre programme with puppet shows, story-telling and physical theatre.

Tues 6th at 3.30 Waxi the Hero – a puppet & marionette s how Entertainment plus learning about birds. The production is sponsored by the Rare Finch Group and BirdLife South Africa

Tues 13th at 3.30  Rudolph on Safari performed by Margarat Auerbach 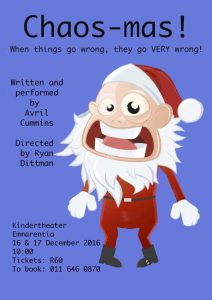 Fri 16th at 3.30 and Sat 17th at 10  Chaos-mas Physical Theatre (be warned –  small children may be overwhelmed by  the loud noise and exaggerated movement of physical theatre.  My near 3 year old grandson was!) 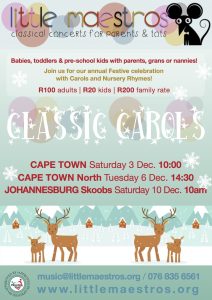 On Saturday 10th December at 10.0 at Skoobs  Bookshop in Monte Casino young children can enjoy music and singing with Little Maestros where there will be songs about reindeers, snowmen and presents under the tree.  (I remain dubious about all this snow stuff in the midst of mid-summer heat waves in Jozi?)

Janice Honeyman’s  pantomime this year is Robin Hood and the Babes in the Wood. And although this is great for older kids I think for 2 to 4 year olds it is wasted on them .. to far from the stage and too fast and quick.  But for older kids and adults it’s always a good escapist giggle. At  the Joburg Theatre until 30th December.

KIDS’ MOVIES OVER THE HOLIDAYS 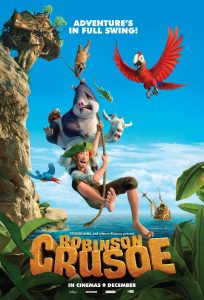 And finally for those quiet times after Christmas, there is always a movie or too.  Check  Ster-Kinekor  for times and venues of shows but it looks as though there are two  animated Disney movies:  Robinson Crusoe as well as Moana: a story of a woman sailing to a fabled island with a demi-god hero Maui involved.  There’s  Snow Queen 2 based on Hans Christian Anderson’s story as well as Storks. Instead of delivering babies these birds deliver packages for a global retailer. And if you liked Shrek you are in luck as Dreamworks have come out with another production: Trolls.

And if this isn’t enough you can always check out Jozi Kids Great website!