At last … breaking free from 2 years of on-line tours of Jozi’s heritage. In early February I joined a live walking tour of Jewel City and Maboneng with Dave Gurney and Alkis Doukakis of the Johannesburg Heritage Foundation.  We met at the Hallmark Hotel with its impressive birds-eye view from the 15th floor over southern and western Johannesburg inner city.

A failure of municipal services and infrastructural maintenance

I drove in on the one-way south: Joe Slovo Drive. But with Hallmark Hotel on Sivewright Street, a one way going north, I made an unexpected detour (several times around several blocks in fact!) trying to get myself in the right place facing the right way to access the hotel. I  was shocked to see the extent of the urban decay, squalor and disrepair in western Doornfontein and the state of dilapidation which has spread through to parts of Maboneng.  Pavements are non-existent, stagnant pools of water are everywhere, and street corners have that ubiquitous smell of stale urine.  But life goes on with a vibrancy and tenacity that is a testament to human connections: taverns, spray-painting workshops, ghetto blasters abound.

And in a cul-de-sac a group of young teens doing a dance routine …. practicing for? “Nothing particular – just because we love dancing”.

With the demise of the urban renewal company Perpetuity, Maboneng has changed in character. When it first burst on the scene in 2010 it grew into a hip place for tourists and suburban visitors with funky boutique stores, art galleries, and the famous Arts on Main with its weekend market of artisanal offerings; a place to enjoy live music and street life.  (Although Arts on Main is now largely deserted and lifeless, the Centre for the Less Good Idea is still operational at the back of this complex.) However, even in its heydey Maboneng and the gentrification of this area was controversial, given the displacement of residents that comes with upgrading and regeneration. Now the precinct is still crowded and full of activity but seems to attract locals, many of whom will live in adjacent Jewel City (which was the focus of our walking tour.)

This is a very different kind of development from Maboneng.  The six city blocks of what is now Jewel City, used to be home to the city’s diamond trade.  Enter the property developers Divercity  in 2018 who, with Gass Architecture Studios, began to transform this area into a managed mixed-use precinct based on a “live-work-play” model.  Jewel City now includes about 1,125 residential units, 20 000 square metres of office space as well as popular retailers such as Pep, Shoprite and Clicks. McDonalds, and Chicken Licken are 2 of the fast food outlets.  Essential services include a Postnet, Capitec Bank branch, Jewel City Medical Centre and Curro primary school. These are all clustered along a central pedestrianized spine on Fox Street which links Jewel City with Maboneng to the east and the ABSA campus to the west.

Something old, something new

There is ALWAYS something new to learn on these tours.  Apart from this being my first visit to Jewel City, I learnt more about beacons, water sources and disappearing foundation stones.

A beacon for 5 townships 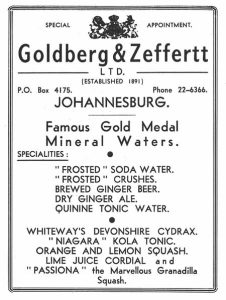 In the area around Van Beek St is an underground lake. This explains the location of the Goldberg and Zeffert bottling factory.  The company relocated here from Boksburg in 1899 after it secured “the right to take water from a well”.  Water was crucial both for the drinks and for washing the bottles for re-use.  And with good old-fashioned mechanics, the cold-drink bottles contained a marble to maintain the pressure of the aerated contents.

And finally the mystery of the missing foundation stone of the brick structure (1924) of the African Congregational Church. Although this building continued to function as a church until the 1960s, a new African Congregational Church was built in Orlando East (date as yet unknown to me … more research neede dhere).  In about 2017 the original foundation stone was moved to the Orlando East church.

The photo below sums up much of the area from Maboneng north towards the Hallmark Hotel: visible security presence (both Maboneng precinct security as well as volunteers from the local Community Policing Forum accompanied us for all of our walk from Maboneng back to the hotel. Cell phone snatching is rife apparently); failing infrastructure with roads and pavements obstructed and potholed; neglected buildings in bad disrepair; but despite all this a vibrant community spirit and street life.