Why is there such an abundance of bird life?

There are several reasons:

This has attracted an increasingly varied bird life to the city and its outskirts.

I grew up in Johannesburg and birds like starlings, loeries , hadedas, puff-back shrikes etc. were seldom if ever found in Johannesburg.  Now they are common visitors to our gardens.

The rose-ringed parakeet is another of these new inhabitants.   These beautiful green birds , with fabulous turquoise tail feathers get their names from the red neck-ring which the male has (seen on the top bird on the above).  They are noisy gregarious birds who announce their presence with loud squawks.  We have heard them often here at Liz at Lancaster both flying over and sitting on the bare branches of the neighbour’s  tree.

This last week however, two finally found the bird feeder in the garden and embarked on a major feedathon for about 20 minutes. The next morning they were back, but now,  like my sons, they had brought all their friends to partake of Liz at Lancaster’s fare! And now they fly in morning and evening like clockwork.

Although, it’s wonderful to see their glistening chartreuse green at the bird tray, they can apparently take over.  They aren’t indigenous to South Africa but, like elsewhere in the world, are escapees from aviaries and have established feral populations. There are  feral populations in London  and other parts of England, in  Europe and the U.S.   SOriginally from North Africa and India, these birds are very adaptable and have few natural enemies. 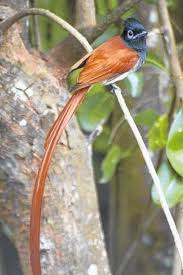 Apart from the standard doves, sparrows and pigeons, other birds which are regular feeders Liz at Lancaster’s bird tray are glossy starlings, crested barbets, red bishops, grey loeries (the grey go-away bird), masked weavers, bulbuls,  & Karoo thrushes amongst others.   And birds which come to the garden but feed on insects are Cape robins, puff-back shrikes, green wood-hoopoes, white-eyes and even a male paradise flycatcher seen on the right.  The black (now amethyst) sunbird loves the aloes and we hear green pigeons, the rain bird or Burchell’s Coucal, the Boubou shrike and at night the water dikkops (now called the spotted thick knee).

On quiet evenings we hear the spotted eagle owls which roost down at Delta Park.  Delta Park (5 blocks from Liz at Lancaster) has an amazingly prolific bird life.   Nearly 240 species have been recorded there.