702 Talk Show host Jenny Crwys-Williams, had several conversations and interviews last week around the state of the Barbican building, a heritage resource in the Central CBD of Joburg.  Since leaving Wits University in 2005, where in my latter years I headed up a newly-established post-graduate division of Heritage, Tourism and Cultural Management Studies, (what a mouthful), I have conducted research work into various aspects of Johannesburg’s heritage. Working for developers and conservation architects, one of my various contracts was to research the history of the Barbican.   The grand old lady, eccentric and weather beaten, stands on the corner of President St (no 89) and Rissik St.

HISTORY OF THE SITE

Occupying a highly significant position in relation to the early Market Square of the town, it was part of the original township of Randjieslaagte which formed the core of Johannesburg.  Randjieslaagte was a triangular piece of land left over after the surrounding farms of Langlaagte, Turffontein, Braamfontein and Doornfontein had beensurveyed in 1886. 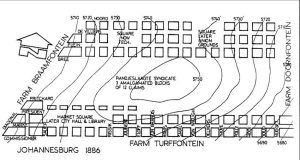 Owned by the Government, plots in Randjieslaagte were sold off by preferent rights (rather than freehold).  T.W. Beckett (who was later to establish a large beverage wholesale company) was the largest buyer of land around Market Square, paying £1065 for the preferent rights on a block of 5 stands fronting market square. His purchase almost certainly included the stand where the Barbican was later to be built, for the first record in the history of the transfer of title deeds, shows that the building was transferred from Johannesburg Mining District to T.W. Beckett in 1921 (ie when preferent rights were changed to freehold rights).   T.W. Beckett transferred it to Lease Properties in 1940. Prior to the Barbican being built in 1930 the site was occupied by a fruiterer in a small wood and iron building (South African Builder 1931) .    The above plan of early Johannesburg, (showing Randjieslaagte in relation to the surrounding farms and the position of the Barbican on the north-east corner of  the early Market Square of the town), comes from  Musiker (Concise Historical Dictionary of Greater Johannesburg, 2000).

HISTORY OF THE BUILDING

Designed for H.G. Heimann in 1929 by Obel and Obel, the Barbican was completed in 1931 when presumably Heimann leased the property from T.W. Beckett.  The original plans of the building show that it was 42m high, square in plan, with eleven levels. 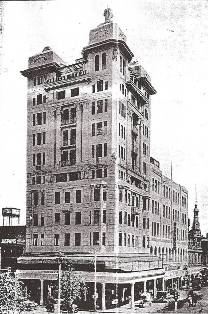 These levels comprised a ground floor with nine floors above and a studio in the towers forming a tenth floor.  (Accompanying 1931 photo of the Barbican from Museum Africa). There were 4 shops on the ground floor protected by a canopy with a lobby off President St and a lobby off Rissik St, both leading to stairs up the next floor.  There was a restaurant with kitchen on the first floor, facing onto Rissik and President St.

Farber  (The Star 27 July 2006) writes that  that when the building was first built, and ‘going to town’ was a big outing, people frequented the shops at ground floor level and ‘children would be given treats at the sweet shop while gas fires warmed the building’s interior.’ A grand staircase (still visible through the boardings) led up to the restaurant at first floor level where those who worked in the offices as well as visitors to town would have eaten.

The 2nd, 3rd and 4th floors comprised offices, waiting rooms and workshops ( a waiting room and workshop per 2 offices) while floors 5 to 9 allowed for 9 offices per floor.  The tenth floor comprised, on the south side, a large photographer’s studio with waiting room, dressing room, workshop and dark room and on the north side a caretaker’s bedroom and living room , with the ubiquitous ‘boys room’ and shower built above.   An open roof garden (called a verandah on the plan) separates the southern studio from the caretaker’s flatlet.   The contractors were Messrs F.Allwright and Co and the tender price was £30,000. (South African Builder 1931: 51)  The building was erected in two stages marked by the lower portion (ground and the first 4 floors) faced in stone and the upper portion (floors five to faced in plaster).

Although Johannesburg architecture post War had tended to follow the English trends of post-Edwardian architecture, the Barbican along with Astor Mansions,  (shown in accomanying photograph, source: Chipkin’s Johannebsurg Style 1993),  signalled a time when Johannesburg began to look towards America. The name ‘Astor’, for example, referred to an extremely wealthy American family who made their money in New York real estate. The choice of name deliberately linked Astor Mansions  to the grand apartment buildings and skyscrapers of Manhattan.  Chipkin (Johannesburg Style 1993: 85) writes that ‘both [Barbican and Astor Mansions] belong emotionally, if not chronologically, to the optimistic period of the 1920s. Both epitomise Johannesburg’s competitive, hybrid environment.’   The Barbican was built to challenge the height of the Victorian spire of the Palace Building, previously Johannesburg’s highest structure   But the Barbican was soon overtaken by Astor Mansions at eleven stories, also designed by Obel and Obel.

Astor Mansions was also intended to be 10 stories high but when it was realized that the Barbican would dominate the Johannesburg skyline, Obel and Obel were instructed to increase the height of Astor Mansions.  Shades of the 21st Century competition between the Michelangelo dome and Sandton City’s additional pyramid, to dominate the Sandton sky line !!

Alterations were made to the interior of the Barbican over the years to cater for the changing business needs. In 1949 Maison Gwen’s hairdressing salon occupied space on the first floor and by 1984 the Rendezvous Escort Agency occupied the third floor.   In the 1980s the Barbican was already recognized as a ‘gloriously grotesque landmark’.  It was selected by Roger Boden of Wits’ Town and Regional Planning Department to be included in a double page spread in The Star of May 4th 1981 of a piece entitled ‘Translating Precious Heritage into Special Beauty’.  The building has been mothballed since 1990.

South African Mutual Life Assurance (Old Mutual) bought the property in 1995.  In the early 2000s the Barbican was illegally occupied by homeless people and a lot of damage was done to the internal structure. Owning more than 40 buildings at one stage in the inner city, Old Mutual sold off about 28 of them between about 2001 and 2005.   Whilst there have been continuous references to the upgrading of the building, nothing has yet materialized. The Property Magazine  (June 2006) notes ‘the building is undergoing a R120 million refurbishment and will open as an upmarket members-only private club with a car showroom, a gym and a cigar and champagne bar. Reports say it is due for completion at the end of 2007.’   Nothing has come of this to date. Sadly the longer it remains unused the more dilapidated the building will become – demolition by dereliction.  A sorry state of affairs.  If Old Mutual was indeed committed to restoring Johannesburg’s history, and if it was always unable, due to costs, to restore this heritage resource for what is called adaptive re-use, one wonders why it bought the building in the first place? Although its headquarters are in a ‘neo- neo- classical’ office park in Sandton, Old Mutual’s has offices adjacent to the vacant land surrounding the Barbican.

Entrepreneurial property developers often promote urban living and a more cutting edge life style to society’s creatives and avant garde.  Brian Green (cited in The Sunday Times Metro 15 Aug 2004)  who developed the trendy 44 Stanley Ave complex in Milpark says: ‘I can see the absolute possibility and romance on the building, although it is dilapidated. It stands alone, uncluttered, and this only adds to its beauty’. He compares the dilapidation of the Barbican to the war damaged buildings he saw in cities in the Middle East, East Africa and the former Yugoslavia when he was a cameraman.    An ironic inditement on Old Mutual’s commitment to inner city regeneration.

The public space which the Barbican now looks down on, formed part of the first Market Square in Johannesburg. The market building was demolished in 1915 after the construction of the City Hall (1912-1914) and subsequently the market moved to Newtown in the present day Museum Africa until 1974 when it moved to City Deep.  This Market Square was to set the tone for the ‘spirit’ of Johannesburg up to the present day.  Chipkin (Johannesburg Style 1993:15) notes: ‘From the outset the Victorian town … was a product of predominantly secular forces, and this was reflected in the town layout. Unlike Boer settlements built around their kerkplase – representing the relative cohesion of small Calvinist farming communities – Johannesburg was laid out around a central trading square, and church sites for a diverse population were relegated to random street corners in the town plan.’  While the Market Square remained the most important city square, it gradually became the nub of the administrative centre with the financial centre to south of the western part of the square.

A future blog will talk about the Barbican in the context of Dorothee Kreuzfeld’s 2004 ‘painting in public’ programme – an intervention with selected buildings and spaces in the inner city of Johannesburg.

A further blog will look at the Rissik St Post Office (1897) , another disgraceful example of demolition by dereliction, this time by the City of Johannesburg.

6 thoughts on “Jozi’s Heritage: The Barbican”