The pick of the month has to be the Kentridge festival coming up with exhibitions of his work opening in three Johannesburg venues in November. 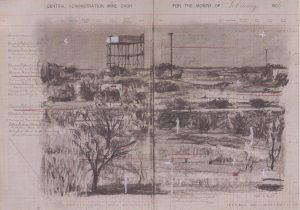 The exhibition at the Goodman Gallery comprises approximately 45 mining landscapes drawn on the pages of Johannesburg mine ledger books from the early 1900s. They are a continuation of Kentridge’s concerns around mining and its historical role in the social fabric of Johannesburg and the industrial landscape of the city. While mining seems to be one of his thematic interests, Kentridge has often described drawing as being his primary concern. In an interview in the late 1990s Kentridge said: ‘The themes in my work do not constitute its main starting point, which is to draw.’

The Tapestry exhibiton at WAM will include approximately 20 tapestries, and some related sculptures and drawings as well as film footage of the weaving process (each tapestry is made by five or six weavers sitting in a row along the loom.)  Marguerite Stephens and William Kentridge have been working together on tapestries for the past 24 years producing about 40 tapestries. Stephens adapts Kentridge’s collage drawings for the very different materials and techniques of tapestry-making. This exhibition promises to be a treat as it has been a long time since there has been an exhibition of a major body of these collaborative tapestries.

The Refusal of Time is a collaboration with composer Philip Miller, projection designer and editor Catherine Meyburgh, choreographer and dancer Dada Masilo, and Peter Galison, an American historian of science. It comprises a five channel 30 minute video with at the centre of the installation a ‘breathing machine’, along with 5 steel megaphones. The Refusal of Time was first shown at Documenta (13) in 2012 and has since been seen in several countries around the world.  It has been bought by public art galleries including the Art Gallery of Western Australia and is also jointly owned by The Metropolitan Museum of Art, New York, and the San Francisco Museum of Modern Art.  Made in the artist’s studio at Arts on Main over a period of 2 years, it has now returned home.

Review of Refusal of Time

Cotter’s 28/11/2013 review in the New York Times, introduces us to the visual assault which is so characteristic of Kentridge’s  video projections.

‘Metronomes pound away like a grim marching band. Hands on clock faces spin, spewing trails of stars. Drawings erase themselves. Maps of Africa appear and disappear. In a laboratory filled with what look like giant watch springs, white-coated figures mix potions to the beat of a tuba-intensive score by Philip Miller.’

The 5 steel  megaphones in the installation are formal devices but are functional as well for they direct sound. There is Philip Miller’s general soundscape but if you sit underneath one of the megaphones you can hear the sound of the spoken text very clearly.

In a video discussion (13/03/2104) on the making of The Refusal of Time,  Kentridge speaks of making time visible (playing a film in reverse or fast forwarding) as well as transforming time into material objects – eg representing fractured time with 2 simultaneous images overlapped or synchronized images becoming out of synch.

“If time could reverse itself there’d be a kind of utopian perfectibility – you can take back all the things you wish you hadn’t said, the smashed vase recomposes itself perfectly … but that in some sense is our definition of time – that which you can’t call back.”

The machine at the centre of the installation pumps slowly up and down, a cross between bellows and pistons. In Kentridge’s trademark language where symbols and ideas transform from one image to another with fish-like slipperiness, the machine is a breathing machine; like human lungs; the rhythm section of the installation (keeping time); the ‘elephant’.

Seeds for the Refusal of Time

In the 1870s there was a plan in Paris to use regular bursts of air from underground copper pneumatic pipes to calibrate the city’s clocks – a reminder of late 19th century attempts to ‘control time’. This reminded Kentridge of Dickens who, in Hard Times, likened the working of factory machinery to ‘the movement of the head of an elephant in a state of melancholy madness.’   Taking the metaphor of rhythm and time-keeping even further, Kentridge likens the human being to a clock which gets wound up at birth and ‘will keep ticking until it winds down at the end of its allotted years’.

Kentridge refers to the concept of the black hole as both a scientific theory of time as well as a metaphor for human states of being and the inevitability of death itself. He says of Refusal of Time:

‘It’s a celebration of making against the fact of our eventual disappearance – that’s the refusal of time. We are not going to escape our journey to the black hole at the end, however fast we dance or run in the way. But that dance and the run .. are what it’s all about’.

So let’s run and dance and get lost in the Refusal of Time.