As an international tourist who has never visited Joburg, it can be a very confusing place.  There are many reasons for this:

Boundaries have changed over time 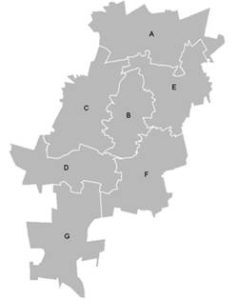 B: Randburg, Rosebank and the Park suburbs (south of Joburg old CBD and

Previously Johannesburg incorporated Regions F and parts of B only, with, for example, Roodepoort, Randburg, Sandton, Soweto and Lenasia all being separate municipalities.

The size of this single metropolitan municipality (with some 8 million people) covers over 1, 645 square kilometres. Sydney’s central municipality, by comparison, covers 1, 500 square kilometres. It’s been calculated that if a resident of the southern-most area, Orange Farm, [at the south of Region G] were to walk northwards to the inner city, the journey would take three days. Often Ekurhuleni is included in the loose definition of the Greater Johannesburg Metropole, taking the population to around 10 million.

Rather than give directions via street names, most Jozi residents still use internalized grass roots directions – “Go down the hill past the Shell Garage and turn left at the electrical shop”.  Much of this has to do with the fact that in the past, many streets lacked signs, and even now most of the street signs are often in poor condition, placed low down on pavement edges with minimal lighting at night increasing the poor visibility. Many locals use a GPS system (Garmin or Tom Tom being the 2 most popular). However these still need to be used as guides only, as they often do not record road closures, or bad traffic intersections, and cannot keep up with traffic lights that are out of order.

Johannesburg is circled by 80km of ring road – a motorway comprising 3 freeways which converge on the city looping around its outskirts. See schematic map under Location on www.lizatlancaster.co.za).

Built in the 1960s, these motorways opened the way for decentralization, development of large suburban shopping malls, flight from the inner city and urban sprawl.  At the time of writing this post, there are major roadworks which form part of the Gauteng Freeway Improvement Project. As a result of the roadworks, there is very bad congestion and major traffic hold-ups on freeways from 7 to 9 am and from 4 to 6.30 pm. The Gillooly’s Interchange, the point where the N3 Eastern Bypass and the R24 Airport Freeway intersect, being the busiest interchange in the Southern Hemisphere (Johannesburg, Wikipedia), is particularly badly effected. Obviously the more clogged up the motorways become, the more people use ‘rat-runs’ through the suburbs, so increasing traffic in these areas too. While many of the roadworks will be finished in time for World Cup in June 2010, some will be ongoing until 2011 and into 2012.  Most of the new motorways in and around Johannesburg will be tolled.