A couple of years back I wrote  a blog  about using minibus taxis to get around Joburg and the kind of local knowledge that is required to do so.  I included an image of the cover of Susan Woolf’s book of taxi signs published in 2007.

For nine years Woolf has been researching the sociology of this shared language (sometimes dubbed South Africa’s 12th official language’ which is learned by word of mouth and through watching other commuters.   As an artist she has also documented these informal hand signals and explored this cultural phenomenon in her artistic production, using it as the subject of her PhD thesis at Wits  (an interdisciplinary research project crossing over between Fine Arts and Sociology). 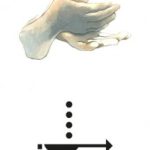 She developed a braille system of tax signs for the blind using tactile shapes representing various finger and palm positions which could be easily read by blind people.  In 2009 Woolf published Taxi Hand Signs Book for the Blind coinciding with an exhibition showcasing the tactile taxi hand signs where people could feel the textured shapes and read the destination to which they indicate in Braille .

Forming part of her  doctoral research is an exhibition currently showing at  the Wits Art Museum “Taxi Hand Signs: Symbolic Landscapes of Public Culture“.   Laurice Taitz in her exhibition review in the Mail and Guardian writes:

[Taxi signs] are basic gestures tied to narrative threads that swirl through community life connecting today with history and folklore.  Of course, not everyone using them knows what they signify apart from a place name.

To understand their meaning, Woolf conducted interviews with taxi bosses, drivers and commuters. Take the sign for Marabastad — one hand with its fingers grasped together, the other hand performing a slicing motion below it. Woolf found that it was derived from the suspected muti killing of a Marabastad taxi operator: the sign indicates the severing of his testicles. It caused upset, but remains in currency — an efficient signifier of a destination.