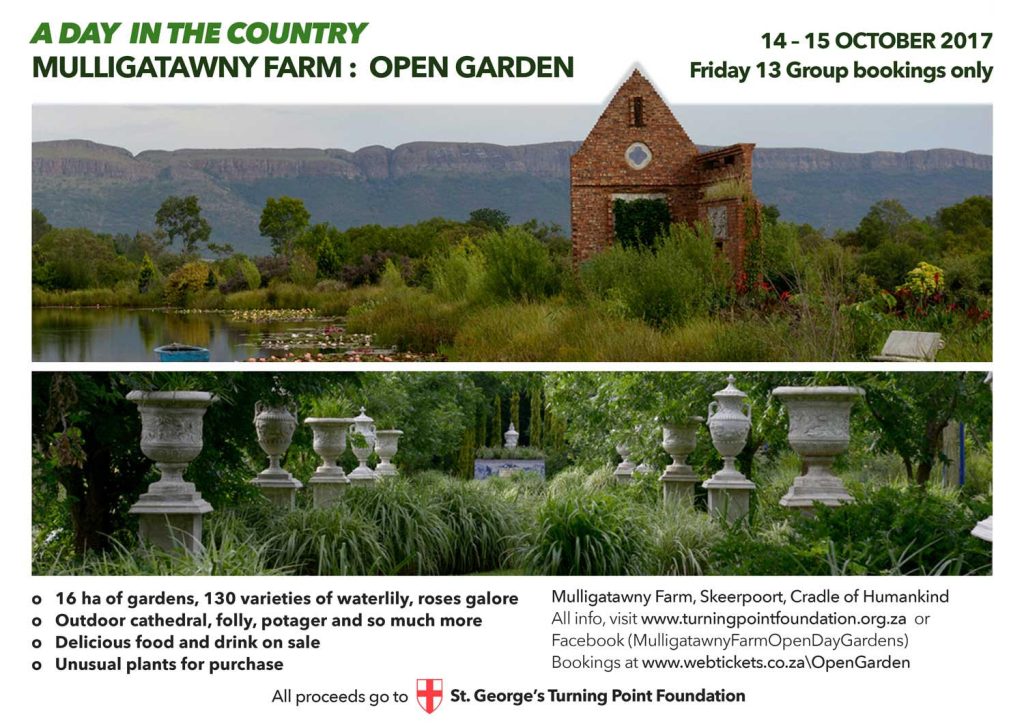 Do you know what a folly is (apart from various current heads of state)? And what is a potager? This is your chance to find out. And at the same time you can have a wonderful day out of Joburg and support a really worthwhile charity.  On the weekend of the 14th and 15th October the privately owned farm of Mulligatawny will be opened to the public. And best of all, proceeds go to the St St George’s Turning Point Foundation an amazing organization which helps young people acquire vocational skills and obtain work.

This 40 acre property was purchased in 2002 by the interior designer Michael Hogan. Originally  a tobacco farm and then a flower farm, it  was completely derelict.  Hogan set about clearing and relandscaping, removing many alien species like syringas, jacarandas and poplars. His vision remained heavily dependent on European prototypes, even down to echoes of Monet’s water gardens at Giverney.  Yes – there are over 130 varieties of water lilies as well as a thousands of roses plus an amazing orchard.  And then let’s not forget the potager – which is basically a vegetable or kitchen garden … but set out in formal and elaborate designs.

What is a folly?

And then there are built echoes of  18th Century European landscape devices such as follies and even a grotto.  Some people settle for concrete gnomes and metal birds in their garden but wealthy landowners back then introduced buildings into the landscape which had no practical purpose (hence the name ‘folly’) but were rather decorative and symbolic. So ruined cottages and watermills suggested rural values; eastern temples and pyramids were built to evoke exotic travel both geographically and back in time; and of course Graeco-Roman ruins were a favourite suggesting classical values and learning.

True to its sources, Mulligatawny has its own ruined garden cathedral. So if you can’t get to the heritage homes in England and the France, the next best thing is to take a trip out to Skeerpoort for the day on the 14th or 15th October.

Book for the week-end of the 14th/15th October

This is only the second time that Mulligatawny will be open to the public so it really is a great opportunity to see this extraordinarily special property. Plus it’s a wonderful way to be able to leave the hustle and bustle of the big smoke.  Apart from the huge beautiful garden and various curiosities and garden sculptures, there will be a wonderful plant sale. Plus the bird life is abundant and you might even be lucky to some see buck from neighbouring properties. And there will be food stalls for amazing picnic fare.

So book your tickets at Webtickets (R200 per person) and make sure this week-end is in your diary.