What’s on at the galleries

The dust has begun to settle after the Joburg Art Fair and everyday life can return to gallery staff and their publics.  There are several recently opened exhibitions and several which are opening in the next couple of weeks.  Exhibitions which are already showing include:

Pieter Hugo’s Kin Stevenson’s Gallery in Juta St. Braamfontein.  Hugo’s photographs speak of contradiction and mixed feelings about his home country South Africa.  Hugo says: ‘ ‘Kin’ is an attempt at evaluating the gap between society’s ideals and its realities. The exhibition closes on 8th November.

Running until the 9th Nov at David Krut Gallery Projects in Parkwood is Robyn Penn’s exhibition Echo comprising  various media – drawings, oil paintings, lithographs.   Sensitive and evocative depictions of clouds and the sea speak of changing shapes and forms over intervals of time.  It is in these intervals between  transformations that time is slowed and even frozen.  The exhibition closes on 9th Nov.

Also running until 9th November are Goodman’s two exhibitions Zimbabwean-born Kudzanai Chiurai’s   Harvest of Thorns andFrances Goodman’s Sub Rosa. Harvest of Thorns is loosely based on the book by the same title by the author Shimmer Chinodya and is about public acts of violence as documented and represented by the media.   Goodman’s show is of a very different order and involves photographs of the lower torsos of anonymous women who Goodman has “vajazzled” – a cosmetic treatment in which a woman’s vulva is decorated with jewels

Ilana Seati, Jim Thorne, Shadrack Masuku and Noah Mdluli works are on show on Reverie Revealed at In Toto in Birnam until 21st October. 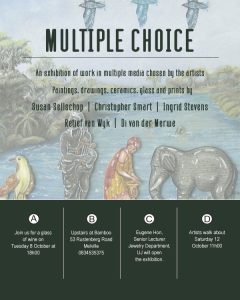 Running until Saturday 12th at Upstairs at Bamboo in Melville is a group show Multiple Choice with an artists’ walkabout at 11 on Saturday.

If you cut short this walkabout, race across to Wits Art Museum you can join Jeremy Wafer’s walkabout of his exhibition Survey which starts at 12pm.  Survey runs until the 3rd November.

Also at WAM until  10th November is Umhlaba 1913-2013: Commemorating the 1913 Land Act. In this exhibition more than 30 photographers interrogate the history of land ownership and the different ways land has been imaged and used. 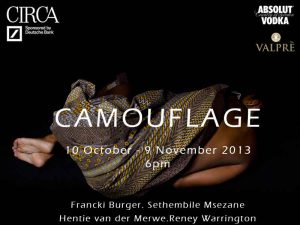 Ayanda Jackson is giving a walkabout of her incredible exhibition at 6 pm tonight 10th October. Well worth attending. Can then go up the drag to the openings at Circa of 2  exhibitions:   a group show, Camouflage  and a solo show by Helmut Starcke entitled Elegies to the Tender Scrub.
A week later 2 several exhibitions open on the 17th Nov. By invitation opening is the first night of Justin Fiske’s exhibition at the Standard Bank Gallery which runs until the 7th Dec.  The artist will conduct a walkabout on the 18th Oct at 1pm. 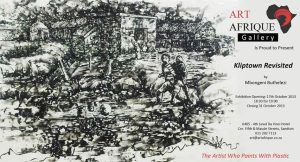