Aesop’s aphorism “Beware that you do not lose the substance by grasping at the shadow’ is subverted by Emmanuel in the title of his latest exhibition “Substance of Shadows’’, a culmination of 6 years work.  Using the material of carbon ‘paper’, Emmanuel’s time-consuming, detailed, painstaking technique; consummate skill; and deeply personal and poignant content, make for a powerful show at the University of Johannesburg Art Gallery.

The atomic bombs dropped on Hiroshima and Nagasaki in 1945 left images of victims in the form of a soot-like residue on the walls of surviving buildings, which Emmanuel describes as ‘carbon shadows, ghosts of the past, fixed into ruins of the present’. Perhaps triggered by these images of the atomic fallout, Emmanuel had a dream that his skin was peeling away from his body as though he was “discarding a burnt, blackened outer covering”.

From dream to material

Global and personal nightmares sparked the idea of creating works by “scratching away a thin black layer from a piece of diaphanous, skin-like carbon ‘paper’ or film.” Carbon paper, an increasingly obsolescent product, is made of carbon black and wax coating a diaphanous film of polyethylene (a plastic). Paul was able to obtain a huge roll of carbon paper directly from a factory (probably the last bulk production in South Africa) and, by scratching the surface with a sharp blade he makes the myriad of marks which construct the images. By his own admission he is compulsive obsessive!

As with his previous exhibition, works on this show demonstrate Paul’s interest in the themes of memory, history, death, loss and memorialization. The first 3 works in the exhibition space are deeply personal.  In the first work on the show, a representation of Paul’s disembodied feet at the top of the format denote his Self-Portrait. The hyperreal style; the position of the feet in the format – seemingly hanging rather than grounded; the visual device of the part representing the whole; as well as the viewing position where one has to look up to the work suspended from the ceiling, all evoke, for me, feelings of vulnerability and trauma.  The hyperreal style recalls a photographic trace, whereas the carbon residue on the floor (a device used in all the images on show), is a reference to the physical trace of the process itself – the carbon residue from the scratched surfaces.

A few months before he died (Paul nursed both his parents before their deaths), Paul’s father reluctantly agreed to pose naked for him. Here photographic likeness; the carbon image of Paul’s Dad; reference to the imprint on the Turin Shroud (Paul has deliberately used a format size of the exact proportions of the Shroud: 110 X 440 cms); and evocations of the burnt images of victims at Hiroshima and Nagasaki all intersect in symbolic richness. During the year it took to make Carbon dad, Paul writes that “ [I was] simultaneously interrogating my memories of him silencing me throughout much of my life and honouring him for allowing me to grow close to him at the end of his”.

Whereas Paul’s father’s ageing, sagging and wrinkled body is re-presented in minute detail with millions of overlapping lines, Paul’s mother is invoked by the powerful signifier of a black veil, a replica of her wedding veil from 1954. The bridal veil traditionally “conceals’ the bride before being lifted by her father at the altar to “reveal” her to her future husband, while the black veil of mourning conceals the grieving female mourner. Death, loss, memory, grief, memorialization are all encoded in this exquisitely executed lace-like disembodied floating image.  Veil 1954 took 11 months to make and was completed a few days before Paul’s mother died. The wall text reads:

Unlike Carbon dad which representationally depicts my father’s presence at the time of his death, Veil 1954 depicts my mother’s absence before hers, as Alzheimer’s disease had already eradicated most of her identity.

In many works on this exhibition Paul ‘plays’ with the different nuanced meanings of this word.  Branding in consumer capitalist parlance refers to the identification and promotion of a particular product through advertising and distinctive design. It may also refer to the physical burning of an identifying mark on livestock; and it may refer metaphorically to markers of identification of rank, status, insider and outsider positions (branding somebody as a witch for example).

Several works suggest all three associations.  In Homeland Military Epaulette 1989-94 (below left) Paul uses branded carbon paper as the material for this work (hence the checkered shiny ‘background”). And the military symbols and insignia are ultimate markers of status and rank. Plus in projecting these images onto the image of his body, Emmanuel suggests a physical branding.

Clothing is also a signifier of the wearer’s status and position in society whether an executive jacket or a school blazer, or even an item like a collar. 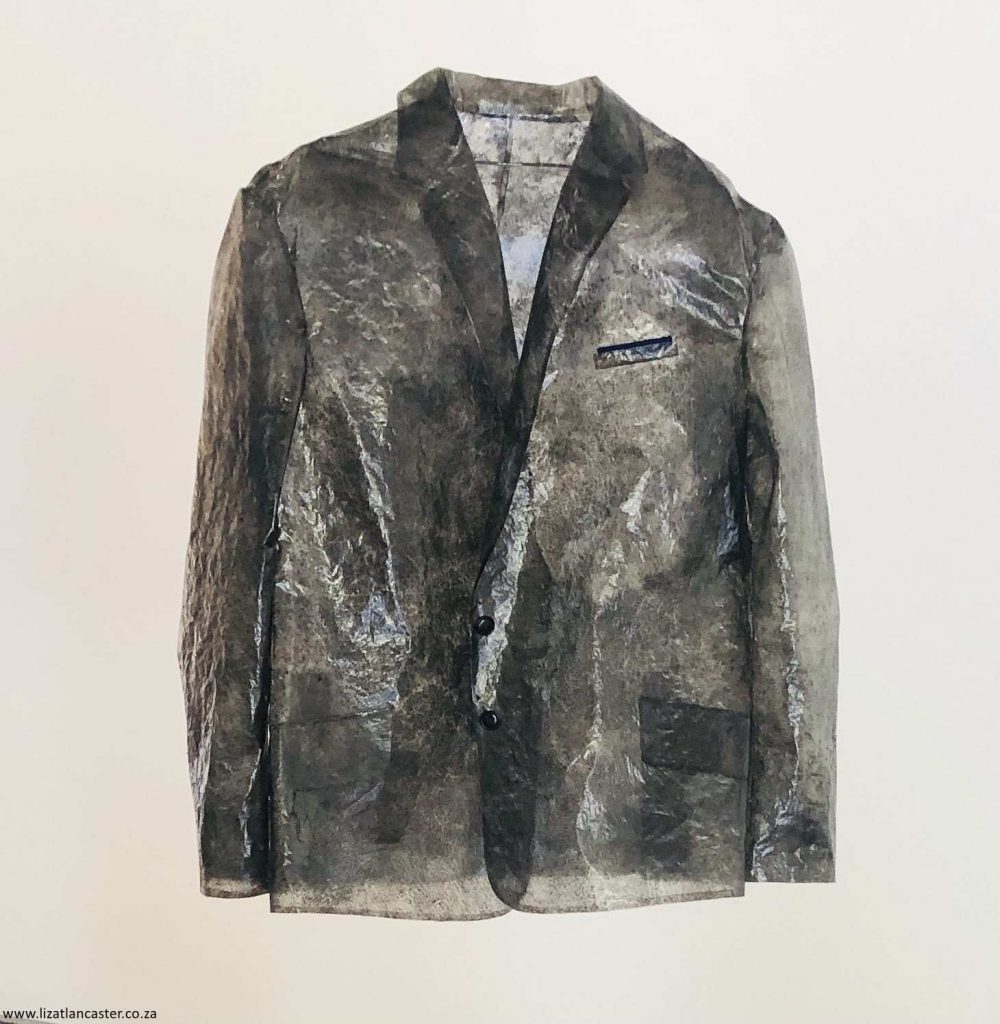 This is a profound exhibition which only has a very short run so be sure you don’t miss it. It closes on 2nd October. There are still 2 more walkabouts with Paul on 22 Sept & 2 Oct at 10.30am. Spaces are limited & bookings required. Visitors can also book to view the exhibition physically on Wednesdays from 9am to 3pm.  Go to the Gallery website to make your booking. The hour long virtual opening walkabout with Paul Emmanuel and Michelle Constant can be viewed on-line.