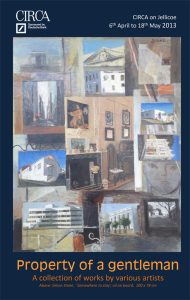 Clustered around the lower Rosebank/Parkwood border on Jan Smuts Ave is a number of galleries which offer an exciting range of exhibitions.

A group exhibition of various artists entitled Property of a Gentleman , including the work of Simon Stone (whose gentle whimsy I love), is showing at Circa on Jellicoe from 6th April to 18th May.

An exhibition of Robert Hodgins work (canvases in his studio at the time of his death is showing at the Goodman Gallery.

David Krut is showing Mine a solo exhibition of Mary Wafer’s work. These paintings comprise a personal reflection on the tragic events at Marikana in August 2012. The exhibition closes on 25th May.

At Gallery Momo there is a group show of Works on Paper opening on 24th April and running until  27th May.

At 44 Stanley Ave at AOP,  Wopko Jensma is showing at a solo exhibition entitled Possessing tools/Professing artistry. The show runs until 4th May.

Another major player in the Joburg art scene is the Wits Art Museum in Braamfontein. Showing currently is an exhibition Izilwane/Diphologol Animals and Art in Africa which runs until 12 May.   Not to be missed is the  retrospective exhibition of Sekoto’s works entitled Song for Sekoto 1913 – 2013 which opens on the 26th  April and runs until the 2nd June.