Neil Fraser who is a private consultant in the field of urban renewal, writes an amazing newsletter Citichat.  Sadly since he has left Johannesburg to take up life in Montagu, these newsletters are less frequent than they were.  Citichat is a Joint Venture with Urban Genesis Management an organization which works to  strengthen local economies and business nodes, through creating desirable and viable places and spaces.  In his  newsletter no 19 of November 2012 he wrote about Rosebank:

What Neil has to say: 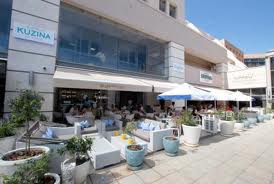 I had a good walk around, a couple of times actually, and found the public environment to be in really good shape, notwithstanding the amount of construction work underway. Clearly a lot of development that has been on hold, pending the completion of the Gautrain, has now started in earnest and it looks as though central Rosebank will be a building site for a couple of years to come. This makes the maintenance of the public environment quite a challenge. The Rosebank Management District and its service provider is doing a great job in maintaining the area under these difficult conditions.

There are already new public spaces that are being well used by large numbers of people – one that was buzzing was the area just south of what used to be the Firs parking area. There is an east/west open area between Doppio Zero and a bunch of other eateries which opens into a broad north/south corridor linking up to the Zone. It is packed with tables serviced by more eateries. Some public art, water features and the whole outside area has a lovely, continental feel to it. Lots of movement caused by the ‘to-ing and fro-ing’ of coffee aficionados and shoppers.

Rosebank has always somehow had the edge when it comes to cosmopolitan feel – possibly it is the scale, smaller than Sandton, yet buzzing with people from all over and in public spaces that are in scale with the surroundings.

It is really exciting the way Rosebank has kept a feeling of populated open spaces between buildings, of open-air eateries and pedestrian walkways which has such a different feel form the enclosed mall and fenced-off office park feel of Sandton.   So while it is tough for the Rosebank retailers while the Rosebank Mall gets its make-over and for businesses generally to cope with the building activity,  Rosebank’s status as major business and leisure hub is set to get even stronger.

We love what Neil likes about Rosebank which has the business and the malls but also has ….

This is why we love living in the Rosebank Region.