Public schools in Gauteng break up on 31st March until 18th April. This means it’s time to update the last now-outdated PPP [aka Parent Protection Programme].   In addition to the various child-centred places I have written about in previous posts, there are a couple of new ones I’ve discovered.

If you need a break and don’t want to scurry round a large outdoor playground, watching your toddler’s every nerve-racking step the wrong way up the high slide.  Or have to peer down every tunnel to see where the panicked shriek is coming from, try Little OT’s in Fontainbleau Village Corner Cnr Rabie Street & Republic Road.  OT stands for Orange Tangos but is a clever play on the climbing skills of the Orangoutan  (on their logo) and the acronym for Occupational Therapy.  As an indoor play area it has loads of developmental soft play equipment as well as climbing structures so favoured by occupational therapists. The second ‘floor’ level  is completed netted in so it’s safe. Plus there is a staff member dedicated to overseeing the little ones. There’s a great little café serving salads and loads of kids items. While you have to be a parent or grandparent to cope with the noise levels, you can at least relax  and have a cup of coffee and something to eat. And rates are very reasonable:

Another place where there is supervision of the play area is at Bambanani’s in Melville.  They cater for children from 6 months to 12 years old and have a busy activity schedule including things like pottery, paper mosaic classes and face painting. They often have entertainment such as magicians, puppet shows and a mobile zoo. According to their website they have

a state-of-the-art four storey covered jungle gym, dress-up area and sand art, a media room complete with Playstation, Wii, Xbox and a continuous reel of kids’ movies being screened. Our library is fully stocked with loads of wonderful, interactive books for children of all ages

GlenPartyFarmYard is a real win. It is a fabulous venue out past Lonehill at 90 MacGillivray Rd off Main Road. There’s a great selection of farm animals: pigs, horses, cows, a donkey, turkeys, ducks, chickens, rabbits and they are in excellent condition.  There’s  lovely open lawn area with table and umbrellas to picnic; a jumping castle and a bike track. The piece de resistance is the patient Shetland Tinkerbell who, ably led by Joe (who has a real knack with apprehensive little ones), takes children on a pony ride – much excitement.   And the best thing of all is that it is completely safe for the little ones to run around and explore.  It costs R30 per child which includes juice and biscuits. The sad thing is that it is only open on Wednesdays and Fridays from 1-5pm.

For a day out of Joburg a visit to Irene Dairy Farm is a win.  Loads of space, lots of fresh air, wonderful food and ‘cows that milk themselves.’

This may be a gendered observation but it does seem that little boys tend to love ‘cars and trucks and things that go’. After all Richard Scarry was once a little boy.  And a trip to Lanseria airport will give loads of opportunity to see planes land and take off, all sorts of vehicles scoot around the runway, passengers disembarking, etc. O.R. Tambo also has a viewing deck but Lanseria is smaller and more intimate and there’s a restaurant with floor to ceiling windows. So  it’s ideal to watch the planes – all sizes, shapes and colour – including lots of small planes.

A wonderful event for small kids is Little Maestros. Run once month on a Saturday morning at Skoobs (a great bookshop in Monte Casino) it introduces children to musical instruments in an hour-long concert with lots of interaction and explanation. Concerts have included the piano, the violin, the guitar, the cello, the flute, the clarinet and an amazing percussion session.  The children watch the instrument being played and they then give it a try themselves which always fascinates them.  The next event is Brass Bonanza at 10 am on 1st April at Skoobs.  While there, visit the children’s section of this excellent bookshop. Along with some play equipment as well as a fish tank, there are lots of books for the children to browse. Although it can be a little nerve racking when a toddler does a demolition job of an entire shelf as you turn to ask the shop assistant for a particular favourite book.

With March/April being school holidays there are a number of shows for young audiences.  There are several productions at the National Children’s Theatre at 3 Junction Ave Parktown. 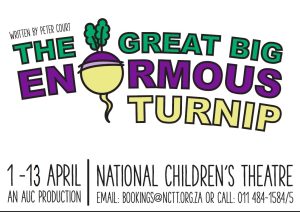 The Great Big Enormous Turnip runs from the 1st to 13th April at the following times:

I’m ashamed to say I was not entirely sure what the Great Big Enormous Turnip was about and then I found a few summaries that basically explained how an entire village, one by one, tried to pull the turnip out of the ground and then in a long long line of tug-o-war with the turnip …. Guess what? I won’t spoil the story for you.

On 23rd April and the 2nd May there are 2 shows of The Frog Prince. It will show at the Wynnstay Theatre in the National Children’s Theatre grounds at 3 Junction Ave Parktown.  011 484 -1584 R70 per person

For slightly older children the musical FreckleFace Strawberry, based on the books by Julianne Moore is showing at the National Children’s Theatre

Winnie the Pooh at the People’s Theatre, Braamfontein 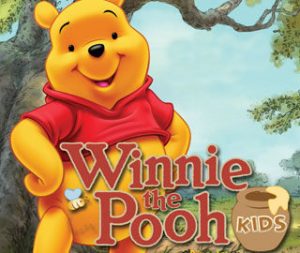 And the old favourite, the whacky wise old bear: Winnie the Pooh at the People’s Theatre (part of the Joburg Theatre)  in Braamfontein is a show based on A.A. Milne’s characters seen through the lens of Disney animated feature films. Winnie the Pooh is once again in search of honey and meets his friends Tigger, Piglet, Rabbit and Owl on the way. But what has happened to Christopher Robin?  This promises to be great fun as the musical has been infused with what the blurb describes as ‘a uniquely local charm, energy and charisma’.   It’s on until 30th April.

The Gruffalo at Theatre on the Square, Sandton 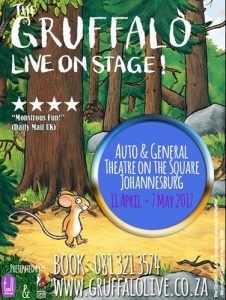 And last but certainly not least is the kids’ favourite:  The Gruffalo, written by Julia Donaldson and illustrated by Axel Scheffler.  I was lucky enough to see Julia Donaldson and her husband  Malcolm performing several of her stories at the Joburg Theatre early last year. Showing at the Theatre on the Square from 11th April to 7th May, this show will be another winner for sure. The Gruffalo is an amazing success story – it’s sold 13 million copies in 75 editions worldwide and kids and parents alike never seem to tire of this ugly old  chap with terrible tusks, and terrible claws, and terrible teeth in his terrible jaws ….

So have a lekgotla with the family, ring the choices and fill your wallets. Most (although not all) of these outings will eat into the monthly budget.