Re- presentations of Sophiatown 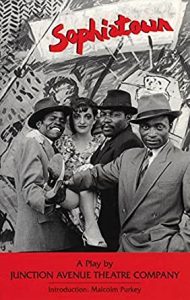 I am ashamed to say that the closest I had come to Sophiatown before February 2020, (more of the tour with Lucille Davie in my next blog) was attending the production of Malcolm Purkey’s play by that name at the Market Theatre in 1986. And of course I also knew Gerard Sekoto’s Yellow Houses, Sophiatown, the first work by a black artist to be bought by the Johannesburg Art Gallery in 1940.

Sophia Tobiansky has a township named after her

In 1897 a man called Herman Tobiansky bought 237 acres of farmland which in 1903 he turned into a private leasehold township (named after his wife) with approx. 1700 small stands.  Sophiatown, like Alexandra just east of Sandton, predated the enactment of the 1913 Natives Land Act, so enabling blacks, Indians and “Coloureds”  to buy these properties under freehold rights. By the late 1940s Sophiatown had a population of nearly 54,000 Black Africans, 3,000 so-called Coloureds, 1,500 Indians and several hundred Chinese.

In local lingo or tsotsitaal, Sophiatown was known as Kofifi with several explanations for the origin of this Tsotsitaal name: perhaps from Sotho fifi, lefifi darkness, obscurity, or fifi, sefifi carcass, corpse, or bofifi, fifi mourning.

The dark parts of South African history are legion, but the many forced removals were amongst some of the bleakest.  During the 1950s, as the blurb for Purkey’s play intimates:  “Sophiatown was the ‘Chicago of South Africa’, a vibrant community that produced not only gangsters and shebeen queens but leading journalists, writers, musicians and politicians, and gave urban African culture its rhythm and style.” 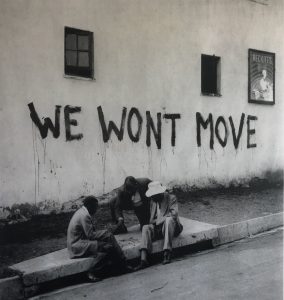 With its fluid social structure and its diversity there was no geography of class but rather a mix of rich and poor, slum and suburbia, gangs and religion, creatives and professionals.  As Don Mattera said, it was a “multi-ethnic quilt”.  And it was precisely this that the Apartheid ideology had to crush. All this came to an end when, at 5am on 9th February 1955, bulldozers moved in and started to demolish homes. Despite resistance, (the rallying cry was “Ons dak nie, ons phola hierso” (we are not moving … we are staying here),  over eight years 65,000 people were forced to relocate into pockets of ethnic separation: Blacks to Meadowlands in Soweto; Indians to Lenasia; Coloureds to Western Coloured Township (now Westbury) and to Noordgesig on the edge of Soweto, and the Chinese to central Johannesburg.

Don Mattera’s “The day they came for our house” gives verbal expression to the personal devastation of the destruction of people’s homes as seen in the photograph above:

Armed with bulldozers
they came
to do a job
nothing more
just hired killers.
We gave way
there was nothing we could do
although the bitterness stung in us
and in the earth around us.

In 1964 the township was renamed Triomf by the National Housing Commission – a triumphant middle finger from the Afrikaner Apartheid government to those who were displaced to make way for white Afrikaans speaking residents.  Can Themba wrote in 1985: “The government has razed Sophiatown to the ground, rebuilt and resettled it with whites. And with appropriate cheek they have called it Triomf”.

In 2006 the suburb was renamed Sophiatown.  66 years on we mourn the trauma of those who were forcibly removed and whose homes were destroyed, lives disrupted and families separated, the annihilation of a vibrant community and the country’s loss of irreplaceable creative talent when so many left for distant shores (more to follow in an upcoming blog).