The post below however, is a bit of a cheat as it simply takes (word for word) a communication from Andrew Delmont, a financial Planner at Toro Financial Planners. And yes, I have his permission to use it – as my son, what else could he say to his mother but “Of course”!   I hope you find it as informative as I have found it.

[An aside with more to follow: Tagala and his wife, Catherine and her daughter are on Lockdown here at Liz at Lancaster. Thandie has gone to her home in Central Johannesburg and we are in ongoing contact.  We are all constantly mindful of all those who have lost their livelihoods and who live in over-crowded conditions with inadequate access to running water and sanitation.]

The uncertainty of all of this is truly unsettling. If you have been trying to make sense of this, and are finding more questions than answers, you are not alone, for even the experts can only make educated guesses at how this will play out. Take a few minutes to read this article published recently in The Atlantic. It summarises the core problem – the problem of just not having the information we need to make informed decisions. Most of the answers do not yet exist. Understanding this really helps.

So what do we know?
We know Covid-19 (the name of the disease) is more infectious than normal flu (about 2 to 3 times more). We also know that it is more dangerous than normal flu. The estimated death rate is 1% (versus 0.1% for flu), though the actual number will only be known once widespread antibody testing has been conducted. The vaccine is 12 to 18 months away according to multiple experts. There are already at least 35 different vaccines in development, with 4 in animal testing and one ready for human trials. It takes time to test the vaccine to ensure it is safe for mass rollout. There may never be a vaccine, or one may arrive sooner than expected.

The best case scenario is a natural mutation in SARS Cov-2 (the name of the virus) which makes Covid-19 more infectious, but less harmful. The new mutation could then crowd out the more virulent form and offer immunity without the potential extreme illness. The worst case scenario is it mutates into something more infectious and more dangerous, which is possible, but far less likely to happen.

The best estimate is that roughly half the people who contract Covid-19 display no symptoms at all. The mass testing in Iceland, the 100% testing rate in the Italian town of Vo, and the closed environment on the Diamond Princess all validate this. Asymptomatic infected people are STILL infectious. It is crucial that all young people understand this, as the asymptomatic spreaders (people who display no symptoms), are far more likely to be moving around and interacting with other people. This is the core reason this has become a pandemic. Young people are also not immune to symptoms of Covid-19 as recent evidence is surfacing of young healthy people succumbing to the disease.

This graphic shows why social distancing is such a critical tool in the fight against Covid-19: 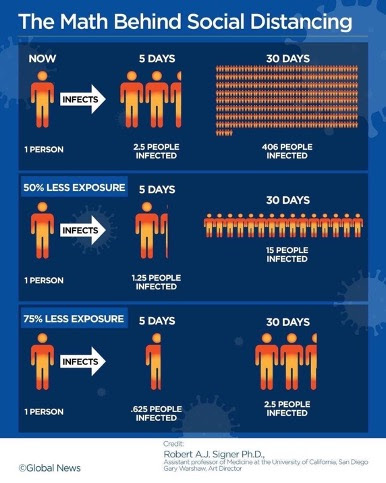 South Africa
South Africa faces grave risks. We have a large population of immunologically compromised people, with a high prevalence of conditions such as TB, type 2 diabetes, heart disease and HIV. We have many crowded living spaces in the townships where it is very difficult for people to truly isolate. There have already been cases recorded in both Alexandra and Khayelitsha, which is of particular concern. 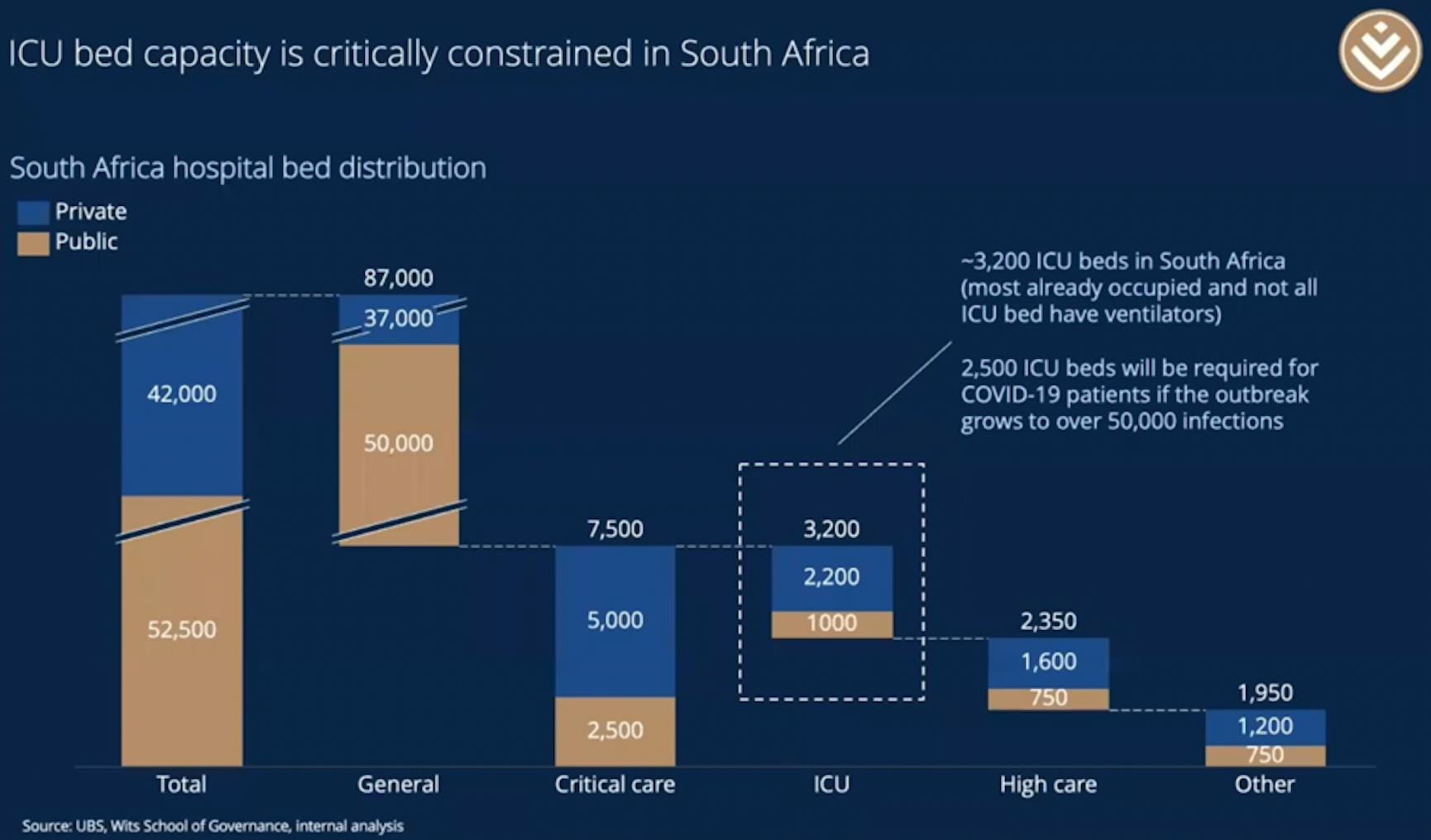 However, South Africa has moved incredibly quickly relative to many other countries in the world. Assuming the numbers are reasonably accurate, they are looking encouraging. It is too early to draw any firm conclusions though.

Compare the shapes of the graphs here in SA, versus the 3 worst hit countries in the world – Italy, Spain and the US. The actual numbers tell a big story too. For example, for over a week now, South Africa has not recorded more than 100 new cases on any day. Italy has been recording between 4000 and 6000 cases per day, Spain between 6000 and 8000 per day, and the US is now recording between 25 000 and 30 000 new cases PER day. 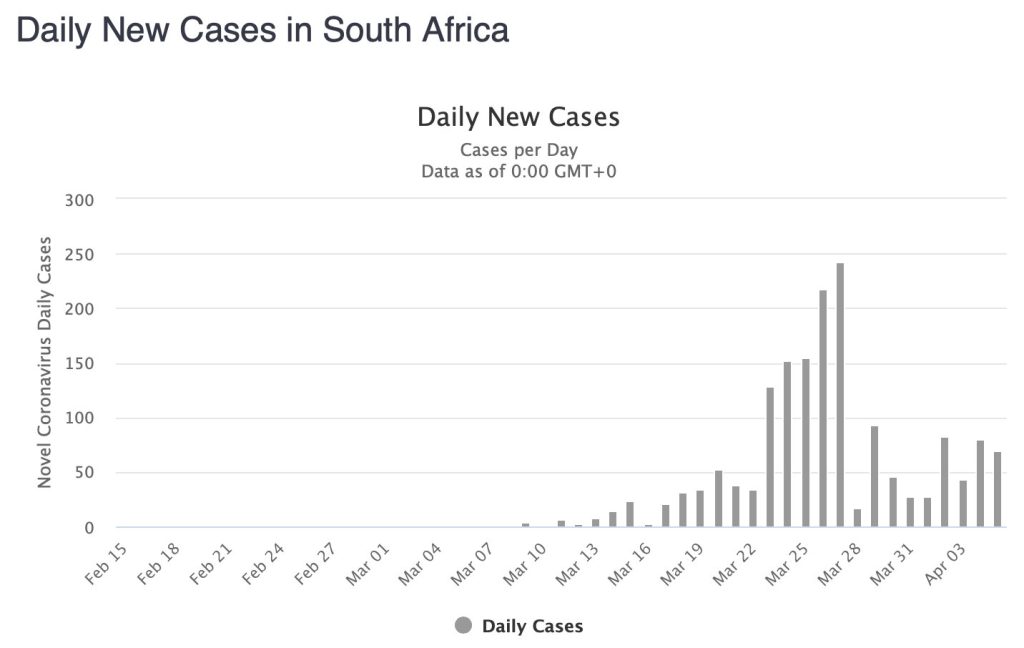 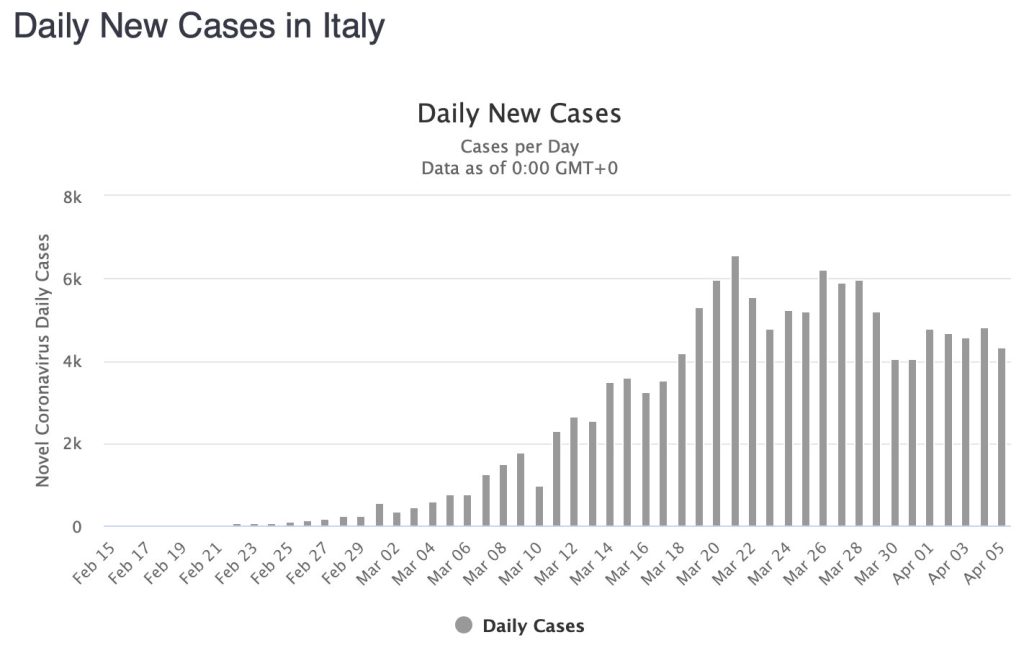 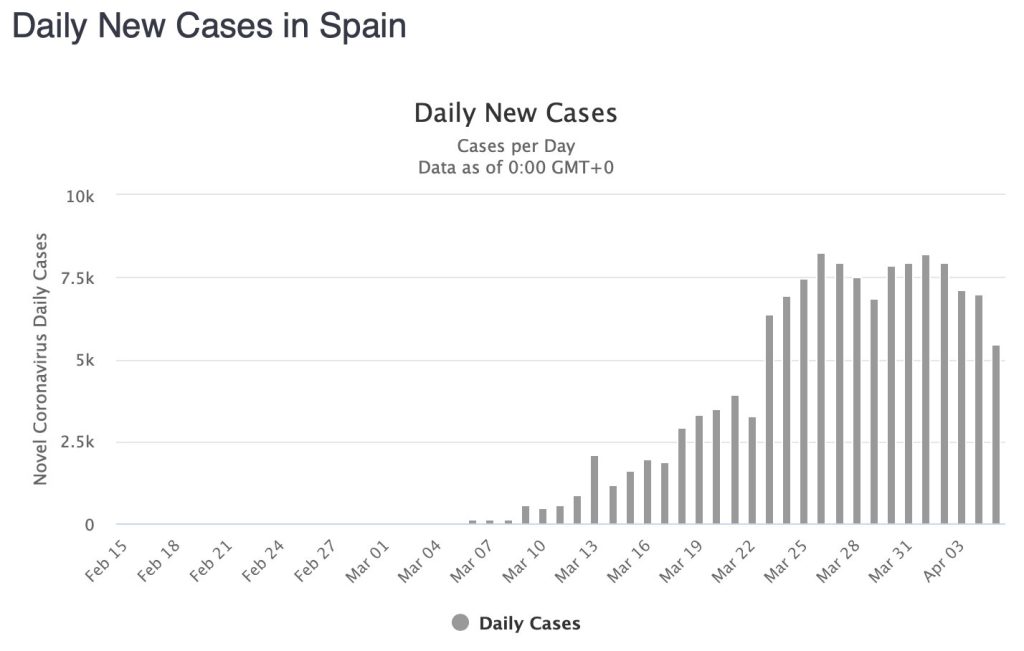 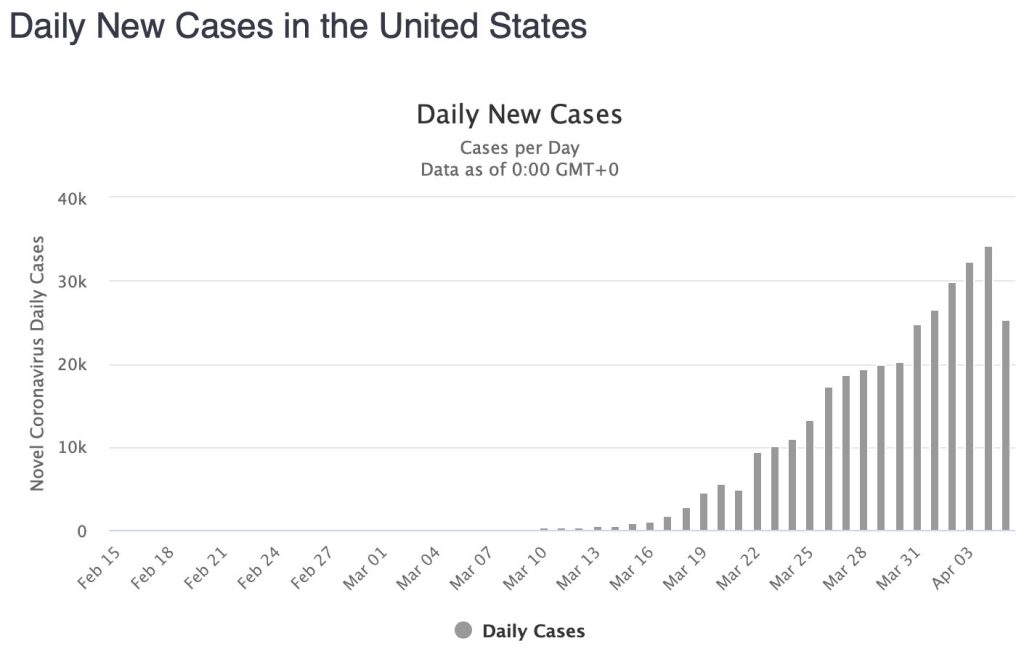 Right now, South Africa is rolling out mobile testing units which will result in some of the highest per-capita testing in the world. Testing is absolutely critical in identifying patients and isolating them to prevent further spread.

There is also some hope that the BCR vaccine (used to vaccinate against TB) offers some protection against Covid-19. Scientists have noticed that outbreaks are worst where the vaccine is not mandatory and appears better controlled in countries where the vaccine is used extensively. Clinical trials have now commenced in Australia and in the Netherlands to test whether the link is a correlation or a causation.

Stock markets
Globally stock markets everywhere have crashed. Virtually everything, except for US Dollar cash has been hard hit. Here is a graph comparing the South African stock market (the blue line) with the broader US market (S&P500), the UK stock market (FTSE 100) and the Chinese market (Shanghai Composite). China, which is now reopening its economy and has had the most recovery, though there is some doubt about whether China is accurately reporting its numbers. 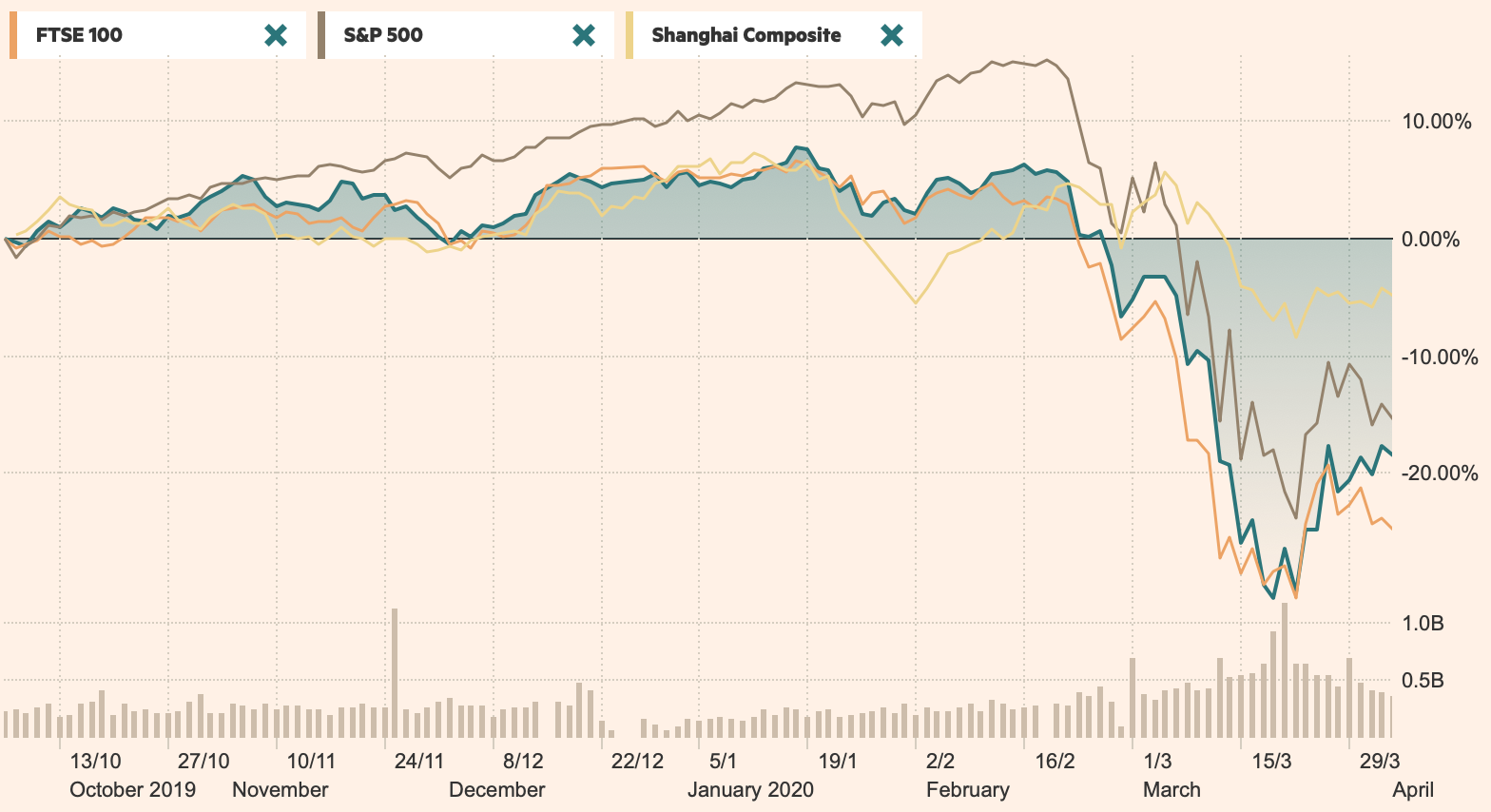 So where to next for the markets? This dives straight back into the arena of uncertainty. Simply, we do not know. The range of potential outcomes is vast, and you will do yourself little service by trying to predict what might happen next. We need to focus on clear, unemotional, rational thinking which always concludes that this pandemic will pass. The world’s leading epidemiologists are in agreement that this is not a mass extinction event and have stated repeatedly that this is not the apocalypse.

There may be several waves of outbreaks over several years and chances are that SARS-Cov 2 will circulate in the population as a seasonal virus until herd immunity is reached through a likely combination of immunity via exposure and immunity via vaccination. The economic damage in the meantime is extremely difficult to calculate. It could be extensive, but markets will recover.

Your investment strategy
So if we can conclude that the strife we find ourselves in is temporary, how should that guide our decision making?

First, make sure you understand how you are affected personally. On the one extreme, there are households who have lost 100% of their income (such as people in tourism, hospitality and personal services industries), while on the other, there are some whose businesses have never been busier (such as in some technology and healthcare services). For most people, expenses have fallen, and so many who are still earning a regular income, are in fact in a stronger position due to higher discretionary income.

Keep saving if you can, help others where you can, and remember that this crisis will pass. The market bottom may have happened in mid-March, or it may still be ahead of us. We don’t know.

The best strategy to deploy is called Rand-Cost Averaging. Most people do this already by saving via monthly debit order. Simply it means feeding money into markets on a regular basis. This is by far the most effective strategy to take advantage of a market crash. If you buy through the dip, you will inevitably get at least some money in near the bottom. This achieves “buying low, to one day sell high”. If you can save more, this is an opportune time to do it.

The worst strategy is to divest from the markets in order to put it in cash to “wait it out”, and only then reinvest once things have settled down. All this achieves is “selling low and buying high”. Losses are paper losses only until they are realised, but there is also the significant opportunity cost of missing the initial stages of the inevitable recovery. Stock markets recover much faster than economies do as stock markets are priced on what is expected to happen in the future, while economies are gauged by what has already happened in the past.

Take a few minutes to read this excellent article published recently on Forbes.

Remember, your particular situation may require a customised strategy.   Stay safe, and isolate.