Science and Cocktails at the Orbit

This city of Jozi never ceases to amaze me that for all its grittiness (or maybe it’s precisely because of this edginess), it is so compulsively creative and trend-setting.  On the last Tuesday of every month the Orbit in Braamfontein holds an evening, called Science and Cocktails, where science meets art.

History of Science and Cocktails

Science and Cocktails started in Copenhagen in 2010 as an initiative involving, amongst others, the Physics Department of Copenhagen’s University. The Jozi chapter, (and Joburg is the only other place where it takes place outside Denmark),  was set up by Kevin Goldstein, associate professor in physics at Wits University and Pretoria University associate professor Konstantinos Zoubos.  Goldstein says that they wanted to make people aware of some of the great science being done in South Africa.  ‘It should be part of the cultural landscape, like art, literature, poetry, music or TV … We want to create a forum for South Africa’s leading scientists to communicate their results directly to the public’ .  And it’s not only a creative and  exciting way of doing so,  but amazingly on top of all this,  there’s only a R20 entrance fee charged. This is thanks to sponsorship from the  Science & Cocktails Foundation (Denmark) and SA National Institute for Theoretical Physics.

Current interest in interface between art and science

There’s a particular interest currently among many artists and curators to examine the interface between these two apparently divergent ways of making meaning in the world:

to name but a few.

And here at the Orbit jazz venue in the heart of Braamfontein, we have an initiative which brings academic scientific research to the public in an accessible way and in a social and inclusive context.  So ordinary people like me, who feel intimidated by current developments in scientific research, can listen to luminaries in their field talk about their latest research while relaxing in an informal and convivial environment  .. all the while being entertained by some of the country’s top musicians and sipping a penicillin cocktail or some such!

Talk on finding an AIDS vaccine

I mean how much more intimidating can it get with concepts like spacetime, string theory and quantum fields which were covered in last month’s talk by Robert de Mello Koch, professor in theoretical physics at Wits. And I can’t believe I also missed the August talk on finding a vaccine for AIDS by Lynn Morris, head of HIV virology at the Centre for HIV & STIs at the National Institute for Communicable Diseases. Her talk was followed by musical magic from great musos like bassist Peter Sklair; guitarist Louis Mhlanga; and pianist Paul Hamner. What an evening! 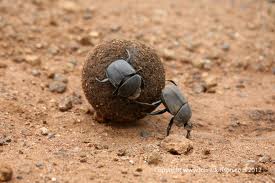 I’m devastated that I will be away for the next talk on 22nd September. Dung beetles have fascinated me since I first learnt that when rolling those huge balls of poop backwards, they know where they’re going by reading the sun’s position or that of the Milky Way.  And how long did it take before humans could do that? Working out direction through the sun’s position I mean … not rolling huge balls of poop backwards!  And through all this gedunte, the females of some species cling with their hind legs to this ever-growing Sisyphian challenge while giving birth .. well… laying eggs …  into ever-increasing layers of excrement. But I digress – how did I get here?  Marcus Byrne (professor at the School of Animal, Plant and Environmental Sciences at Wits) will talk about exactly this on the 4th Tuesday in September, amongst other amazing things, such as  how dung beetles hold their breath for up to 30 minutes – I’m finished! And maybe the dung beetle is too.

I have the October event (Tuesday 27th) written in permanent ink in my diary (if I had a stone tablet it would be carved). Entitled ‘Route to roots: understanding human origins’ – another dilettantish interest of mine – Himla Soodyall talks about our genetic ancestry; how modern humans came to occupy all parts of the globe; and whether humans exchanged genes with Neanderthals.  Himla Soodyall is director of the Human Genomic Diversity and Disease Research Unit at the University of the Witwatersrand. (I love how nobody is called by his/her title of Dr or Professor).

Quantum optics .. short of small talk? Try this one.

And the final one in the 2015 series is a talk entitled ‘Let there be light’ by Andrew Forbes on Tuesday November 24th. Andrew’s research interests include laser beams and resonators, digital holography, orbital angular momentum and quantum optics – now there’s a real conversation stopper!

And all this is why I love Jozi

So much of Joburg drives me mad: like healthy people who park in disabled parking; taxis which use oncoming lanes as a matter of course; and the lack of suburban pavements forcing runners, the elderly, child minders, and ME to walk in the road – and that’s only 3 things that make me grind my teeth.  But despite all that, I  do also so love Jozi and all it has to offer.