Our transformation challenge: The Blue Bulls show the way!

“It just shows how far we have come as a nation” were Victor Matfield’s final words as he reflected on the Bulls semi-final  in Orlando Stadium, having said earlier “Hearing vuvuzelas and boere-musiek playing as we arrived in SOWETO (South Western Townships – lest we forget) was awesome!”
Juxtapose this with the recent report in the Sunday Tribune that 80% of school kids surveyed recently have plans to leave South Africa when they finish matric. According to research conducted amongst 3 500 kids by an events company, Three Ring Circus, this is up from 20% three years ago with the reasons being given as the recession, corruption and crime.
If we have transformed, why are our youth so disillusioned, why is our press so negative, why are visiting 2010 VIP’s hiring bullet (rocket) proof cars and stab-proof vests, why have so few South Africans ever visited the Apartheid Museum, and why have so few white South Africans ever been into a township, why, why, why? 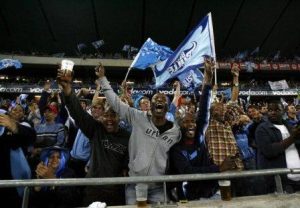 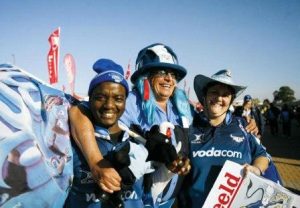 “Transformation is first about behaviour and second about attitude,” a sweaty, vuvuzela-blowing, horns-in-hard-hat Blue Bulls supporter said as he offered me a Captain and Coke in a shebeen deep in Orlando West. “I used to think it was the other way around, but crossing the boerewors curtain, coming to Soweto and watching die Bulle, my manne, wen has changed my life forever” he enthused.
“And if they’d lost?” I innocently enquired.
“Ag, voetsek man!” he laughed.
But therein lies the rub. But for the change of venue 60 000 Bulls supporters would not have made it to the semi-final and the final in Soweto. They would have played at Loftus and their attitude would have stayed north of the curtain.
Transformation is about behaviour, it happens when behaviour changes, attitude then follows sometimes proudly, sometimes reflectively, and sometimes deeply.
“I want to share with you a life changing experience which my 15-year old son and I had this weekend,” says  Matthew Grossett, CEO of Walk for Life.
“We were privileged enough to have attended the semi-final of the Super 14 held at the Orlando Stadium in deepest Soweto on Saturday night.  For those of you who don’t know, the semi-final was between the Blue Bulls (from Pretoria) and the Crusaders (from New Zealand). As with all of us white supporters going to the game, we were filled with trepidation. Was it safe, would it be properly organised? Was it safe, how would the locals react to us arriving in Soweto? Was it safe, was it safe, was it safe, was it safe?!
On the way to the game we passed, and were passed by car after car full of Blou Bulle, most of them sporting the traditional Blue Bull hats with horns on, drinking brandy and coke. At the park-and-ride collection point (all supporters were transferred by bus to the stadium from the park and ride) the Blou Bulle were in full cry. I have never in one day seen so many people all wearing horns, drinking “spook and diesel” and – dare I say it – speaking Afrikaans (there were very few of us “souties” there).  My initial thoughts were that the integration of the Bulle and the locals in Soweto was a recipe for trouble. I could not have been more wrong!
To say that the locals in Soweto came out and embraced the predominantly white Bulls supporters (and visa versa) is an understatement. Before and after the game, hundreds of light blue shirts (wearing their horns) could be seen in the local shebeens in the area around the stadium. We witnessed literally dozens of Bulls supporters hanging onto locals, eating “pap en vleis” and being taught the diski dance! After the game hundreds of us walked freely in the streets around the stadium, chatting to and interacting with the locals. I can honestly say that over the course of the entire day, I never once felt scared or nervous! Over the entire event I never witnessed one act of aggression. The goodwill and camaraderie that flowed on Saturday was an amazing advert for how far this country has come since 1994, and how much potential there is for the future. The vast majority of South Africans are truly amazing people, who can only but ensure that this country of ours just gets stronger and stronger, and better and better.
I went to bed on Saturday night very proud to be a South African, and full of confidence that, despite our well documented problems, this is a fantastic country with heaps of potential.  We all just need to see the good in it and stop focusing on the negative.”
So, on a serious note, we are also celebrating (some of us anyway) a hundred years of the Union in South Africa and independence from Britain. Business Day has run a series of fascinating articles on this history with significant contributions from blacks and whites alike. They have been a compelling read and, in a way, show just how complicated our history is and therefore how complicated our transformation will be. Reading about this history has been most informative, and I guess for me has produced a number of paradoxical learnings.
We have a shared history, but not a common history, a past in which communal-based African political traditions were repressed by liberal-based European political traditions under the guise of nationalism.
Now we have a constitution that is as much our peace agreement as it is our supreme sanction.
We have a national identity that is focused on common issues, but we don’t have a common identity that is focused on a national agenda.
How we write about our history reflects our heterogeneity and our division, yet how we write about our destiny reflects our homogeneity and our union.
Our media seems preoccupied with ahistorical opposition and otherness and seems disinterested with nation building and healing
So as we move forward faced with these complicated paradoxes , as we transform into our next centenary, will we preoccupy ourselves with more of the Bulls-in-Orlando type union and less with the Zapiro-denigrating-prophet type division?
As Peter Bruce (Business Day, 31 May) says “South Africans need to be careful not only of what we say to each other, but how we say it”.
That has to do with how we behave towards each other, and it has to do with the truth of our country.
It’s easy to find fault, talk up the negatives, say that Soweto is a dangerous place, say that “They” don’t respect life, say that this country is “Zimbabweanifying”. (I’d leave if I believed that!)
It’s harder to find the good, to talk up the positives, to go and visit Soweto or any other township, to put our arms around our fellow South Africans in a shebeen and say that our country is the best place to be.
But if we want to really transform –
That’s what we need to do!

One thought on “Steuart Pennington’s take on whether sport can help change attitudes: The Blue Bulls in Soweto”