A couple of years ago I wrote about recycling, a post which focused primarily on the working circumstances of the informal recyclers in parts of Johannesburg.  Very gradually, and way too slowly it seems, the general public is waking up to the terrible problems that South Africa, and indeed the planet faces, with the amount of non-biodegradable wastage.  While the recyclers here in Jozi do an amazing job (both paid private companies and the informal sector) and Pikitup is now growing its recycling initiative, none of this is nearly enough.

Below, in graph form, is the dismal projected scenario in 2050 showing the difference between waste produced and waste recycled and incinerated. (Incineration brings with it a whole set of problems around air pollution). This is at current rate of production and disposal.

China: Dumping Ground of the World

The US recycles only 9% of its plastics, compared to Europe which recycles 30%.  So what happens to the rest?  The majority of waste plastic still winds up in landfills or in the oceans and the rest gets exported to China. Yes, I kid you not – China is the world’s largest importer and recycler of scrap metals, plastic and paper.   In 2012 nearly 1/2 the plastic waste that Americans sent abroad for recycling and about 1/3 of the European Union’s plastic waste exports, was sent to China. According to one 2014 study, China received 56% (in weight) of global scrap plastic exports.

China with its population of  1.4 odd billion and its rapid economic development is very aware of the problems of pollution and environmental degradation.  It recycles 22% of its domestic and international scrap ie about 13.6 million metric tons.  Although this is way more than the US recycles, it still means that a lot of the scrap plastic is not recycled, plus some is recycled under hazardous conditions. So again, much ends up in landfills and in the oceans.

I find it extraordinary that the United States do not deal with their own wastage.  America has not built a sophisticated new plastics recycling facility since 2003, and few of the existing plants can cope with recycling the often dirty, used plastics.  And this wealthy nation of conspicuous consumers will have their recycling problem exacerbated as, in April 2017, China introduced reforms to cut back on the quality (and so amount) of plastic wastage it would accept.

The only people we can change are ourselves

While we can’t change governments or large corporations, by changing our own practices, influencing children from a young age, and talking to those around us, we can start changing perceptions in small ways.  Here are 10 things we can do.  This article contains frightening figures on plastic pollution. And below: 9 EASY tips for living with less plastic.

Our neighbourhood restaurant, Dolci (walking distance from Liz at Lancaster), is selling the most amazing bamboo cups which look and feel like plastic but aren’t, and, of course, they are fully recyclable.  Plus their water is bought in returnable glass bottles – Yay! Retro rules.   (Although Joburg tap water is completely potable).

From medical I.V. bags to soles for school-shoes

A very exciting recycling project has been launched between Adcock Ingram Critical Care; Netcare; Executive Mayor, Councillor Herman Mashaba; and the City of Johannesburg.  Safe healthcare waste from hospitals is being recycled to produce functional new products, including school shoes for disadvantaged children. Non-hazardous intravenous infusion (I.V.) drip bags and tubing made of polyvinyl chloride (PVC) are recycled into soles for school shoes. At the end of January this year approximately 1, 000 school shoes were handed over to learners of the Masakhane-Tswelopele Primary School in Zandspruit by Mayor Mashaba.

David Attenborough has done a lot to bring people’s attention to the dire state of plastic pollution in our oceans.  Animals in distress evoke visceral empathetic responses in people, and Attenborough’s  powerful images, carefully chosen soundtrack and emotive commentary on the grieving mother pilot whale who will not part with her dead calf, is certainly no exception.

So take up a plastic cause … any one. Like #StrawsSuck – a great poster from our very own Two Oceans Aquarium in Cape Town. And tell our young children why they suck. … Please.  We are not proud of what the so-called wise older generation has done to the world. We have a lot to ‘make right’. 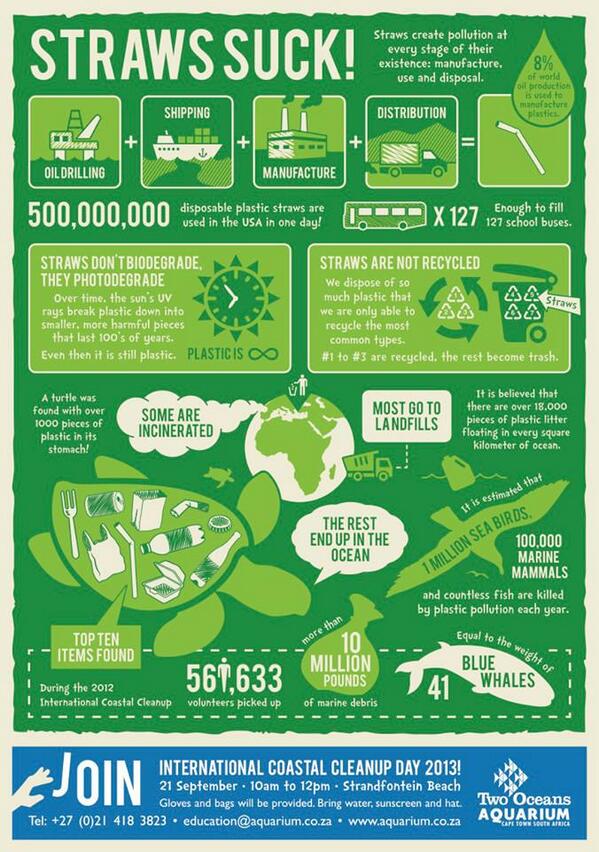 One thought on “Straws suck … it’s a more catchy title than ‘Save the Planet’.”