Cycling along the Braamfontein Spruit

Did you know how many “firsts” the Braamfontein Spruit can claim …. At 32 Kms, the Spruit is the longest municipal park in the world (according to the James Clarke of The Star StoepTalk fame).  When proclaimed as such it was done through the first metropolitan act involving all 3 of Johannesburg’s then municipalities: Johannesburg, Randburg and Sandton.  AND in 2013 it was named by the Guardian as no 1 of 10 best city cycle routes in the WORLD.

Yeah take that The Donald – the longest, the first and the best! 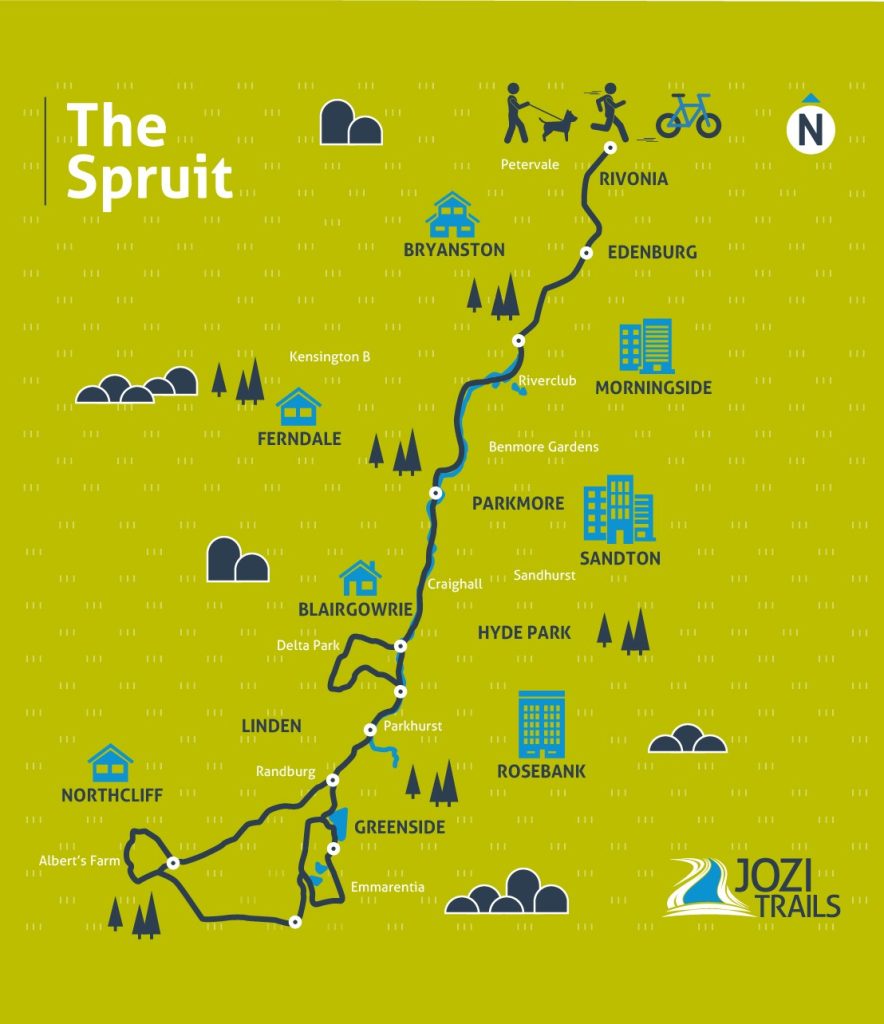 I’m a regular Delta Park walker with my much beloved Khaya.  And I was really pleased to see the new cycle trails developed by Jozi cycle trails.

Jozi cyclists can be a bit like Jozi drivers – a law unto themselves with a “We own the road” attitude.  And the code of overtaking has not been clearly agreed between walkers and cyclists plus many riders do not use bells. So for somebody who still battles with left and right, it’s a bit nerve racking when you suddenly hear somebody right behind you yelling “LEFT!” Does this mean jump to the left or that a helmeted beast and machine are bearing down at 35 km an hour on your left …. so jump RIGHT”?  I was even told once by a cyclist once, that the path was “for cyclists only”.  He was long gone before I found my outraged voice!  So well done Jozi Trails – amazing route developed for bike riders, and dog walkers and little kids feel a whole lot more secure on the paths.

And now Hollard have partnered with Jozi Trails (in co-operation with City Parks and Zoo) to further improve the cycle trails along the Braamfontein Spruit in an initial pilot project.

Meet at 9.30 28th May at Delta Park top parking lot Cnr Pitcairn Road and Penelope Ave Victory Park.  You can bring bikes but there will also be walkers as you are asked to bring comfortable shoes.  You need to RSVP to RorisangMo@hollard.co.za by the 15th May.

One thought on “The longest, the first and the best – take that The Donald!”