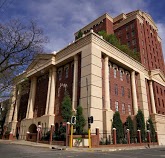 The Grace hotel in Rosebank started as part of the Brand’s family-owned and run group of hotels.  The first of these hotels was the Mount Grace in the Magaliesberg.   In 1983 Chippy Brand and his wife, Cynthia, with no training in the hospitality industry, transformed the venue from a run-down church camp into a popular country-style hotel renowned for its personal service and chamber music festival.  Chippy remembers Mount Grace as Fawlty Towers in those early years, and soon, what started out as an expensive hobby, became an all- consuming vocation for the Brand family, forcing Chippy to sell his engineering business and embrace what he regarded as ‘the crazy hospitality business.’  They then expanded into the urban hotel market, opening two further hotels in 1996: the R78-million Cape Grace at the Victoria & Alfred Waterfront in 1996 which was run by their oldest son, Charles, who had  spent several years working at Southern Sun and The Grace in Rosebank.  Stuart, the Brand’s second son, continued to manage Mount Grace. In 2004 Brand sold The Grace in Rosebank to Hyprop Investments, who in turn brought in African Sun Hotels as operating managers.  After over-extending during the 2010 World Cup and with the post 2010 slump in the hospitality industry, African Sun exited its operating agreement and the doors of The Grace closed in August 2011. For more see http://mg.co.za/article/2011-09-02-saying-goodbye-to-grace. It was not long before Southern Sun Hotels took over the management and less than a year later the doors of The Grace opened again.  And so a proud tradition, which started with excellent personal service and a family owned enterprise, has been transformed into 5 star service from a world-renowned chain.  The Grace is back in business in a big way.  See  http://www.rosebank.co.za/view/index/getaway_to_your_city_54_on_bath/62/1/154