Last year I was privileged to join a walking tour of Kliptown led by Ntokoza Dube aka TK . Kliptown is one of the oldest parts of Soweto and also one of its most neglected areas. I am no politician and have no sense of how long it takes to address infrastructural issues and inequalities in access to education, health and basic services.   Apart from the homeless living in parks, in culverts and under bridges, we only have to see conditions in places like Alex, Diepsloot, Zandspruit, Kliptown … the list is long and daunting .. to begin to comprehend the challenges that any new municipal government has ahead of it in terms of redressing inequities and providing acceptable living conditions.

One of the places TK took us to was SKY Foundation, the acronym  for  Soweto Kliptown Youth, founded in 1987 by another extraordinary man – Bob Nameng.   Bob, himself a neglected street child, was adopted by the legendary Mama Eva Makoko, who ran a clinic in Kliptown.  As he says, he was given a second chance. Deeply steeped in Christian principles and biblical teachings, SKY runs a number  of initiatives to uplift the surrounding community. These include a learning centre, a youth club, feeding schemes, Sunday school, sports activities,  care for the aged,  etc.

Where used toys and children’s equipment find a good home

So when a friend who was moving house wanted to pass on a wonderful collection of children’s books as well as some toys and craft activities, I knew just whom to approach. Last week I met TK outside the Soweto Hotel and we crossed the railway line (on foot) and met Bob at Sky Foundation.  After hearing some of Bob’s initiatives undertaken to uplift the surrounding area as well as further plans for the future, we set off for a very short drive to Mighty Evolution Kids Nursery Preschool run by a dynamic passionate young woman, Candice Madondo.

Entering through a tiny yard (more like a passage) with a row of small potties on one side, and shoes carefully lined up on the wall the other side, we were shown into the small 2-room space which is where Candice and her 2 carers look after 28 under 6 year olds.  Thirteen younger ones, ranging from 8 months to 2 and half, were in the first small room while the 15 older ones (from 2 and a half to 6) were sitting 4 to a table in the second room.

Apart from one of the littlies taking fright at Bob’s dreads and a strange umlungu, everybody else was cheerful, engaged and fully ready to count to 20,  rattle of the alphabet and sing some songs. 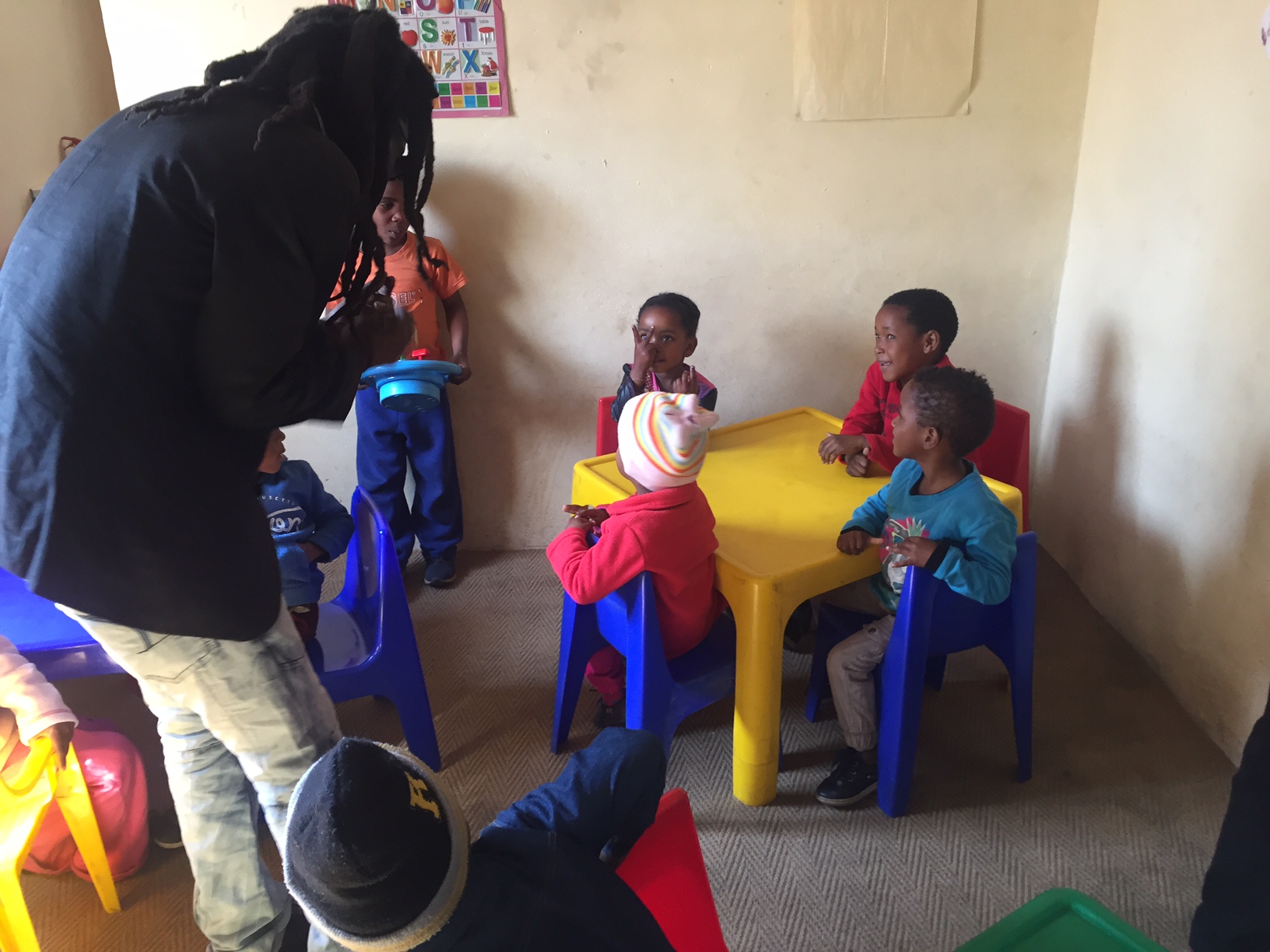 Candice arrived slightly later as, being a Thursday, she was involved in the weekly soup kitchen at the Church. Candice is one of those energetic passionate and committed young women who will always make a difference to the community around her, wherever she is and whatever she does.

She started teaching at Sunday school when she was 14 and is clearly deeply religious.  She told me how  3 years ago God spoke to her in church and prophesied that she would work with children.

At the beginning of 2016, the woman who ran Mighty evolution Kids Nursery Preschool asked Candice to take it over and Candice knew that God’s prophecy had come true.

Now she runs the school with 2 helpers starting at 6.30 in the morning until the last child is collected around 4.30 pm. Parents pay R300 a month for the younger children and R250 for the older children.  Candice said that although the school is registered with the education authorities, because it does not comply with some of the Education Department’s requirements for outside toilets and an outside kitchen, they receive no government funding.

Candice’s plan for the crèche

Like Bob, Candice has plans for the future – to extend the school (all with private funds and materials) to include an outside kitchen, outside toilets and an outside play area. The provision of water-borne sewerage disposal is sparse in Kliptown hence the ubiquitous presence of portaloos and Candice will need to take pipes to the nearest disposal point for the new toilets.

This is a very worthy cause for any donations: from toys to building materials to cash

Candice was over the moon when I passed on the several bags of children’s books as well as a few items of clothing and some toys.  I now know where any toys, books, activities and baby, toddler and children’s clothes are greatly needed and will be much appreciated. And Candice stressed that anything like paint or any building materials would be used to expand the facilities. And with all the other initiatives at the SKY foundation, all donations – craft materials, clothes, second hand furniture, wall paint, kitchen equipment, the list is endless – will be welcomed by Bob.  As with all communities where resources are scarce, nothing will go unused.