While writing my last post on Art Deco in Johannebsurg, I came across photos in my archive of the Jeppe Street Post Office. Three years ago Laurice Taitz of Johannebsurg In Your Pocket together with JDA and Africa Housing Company [AFCHO] arranged a tour of this 1935 Public Works building.

The adaptive re-use of this heritage building into a mixed-use development with 500 flats is part of a drive to develop much sought after inner city accommodation by the City of Johannesburg’s Inner City Partnership (JICP) along  with AFHCO.

What makes this building special?

Well … several things. Firstly, this is still a fully functioning Post Office – with some 15,000 post boxes (although way fewer are still being used)), marble counters, signage and real people on both sides of the counters. We were told that the Oppenheimers still have a postbox here. One wonders not only who collects the mail but who still sends it!

Heritage aspects have been kept intact

Secondly, much remains of the original decorative and architectural detailing.  As with most Government buildings of the 1930s, the decorative programme promoted the agenda of [white] nation-building, colonial race relations and a celebration of modernity and industrialization. In the mural above, a young man in respectful pose on one knee gestures to the modern city of Johannesburg while in the background a black miner leans on his pickaxe.

On the façade, low relief panels depict communication by sea, land and air with the keystone in the central entrance doorway taking the form of Mercury.  Mercury was the Roman god of travelers and transporters of goods. Ironically given the current lack of a reliable postal service in South Africa, Mercury was also the god of thieves and tricksters!

Inside the 6 storey building at ground level is the public concourse with many of the original heritage features retained: windows, light fittings, stained glass, murals, the clock, telegram booths and doors.

The lunette murals above by Anton Hendricks promote the construction of white South African history which was the stuff of school text books until 1994. This includes the myth of the “European” “discovery” of South Africa (seen below); and an emphasis on the riches and wealth of the nation state of South Africa.  Above left, 2 bizarrely genteel women act as overseers of 3 Merino sheep and above  right, a black woman in exotic garb and an elegantly dressed white woman enact an allegory of the bounty of Free State agriculture.

But most special of all: the system of underground tunnels for the transport of mail

Around 5 years ago a system of underground tunnels was discovered. Built in 1935, they connect  the Jeppe Street Post Office and Park Station. On the tour we were fortunate enough to have an underground visit (there are 2 basement levels under the ground floor) to the dark, derelict and somewhat damp and spooky remnants of chutes and conveyer belts.  Much of what has been written about these underground tunnels during the last 5 years is quite contradictory and somewhat inaccurate. A report stamped 1961 corrects some of these inaccuracies: the tunnels were not closed in 1956;  there is no evidence (I know of), that the tunnels connect to the Rissik Street post office; nor that they run to Gandhi Square for example.

In 1956 a new enlarged railway station was built and by June of that year a new enlarged underground tunnel system was put into operation. During this alteration the whole railway track system was lowered by about 8 feet (nearly 2.5 meters for those who learnt their measurements post 1974).  This meant replacing the old transverse tunnels (see below) at each end of the platforms in order to take the conveyers and elevators up to the surface of the platforms. 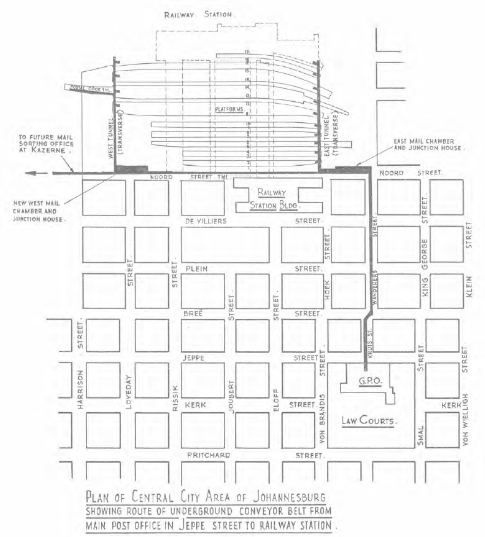 Like a railway control room, when bags of mail needed to be delivered to a specific point, the operator in the control room set the control switches on the mimic diagram (switchboard) to the required destination which was then lit up on the board. The chutes automatically opened or closed accordingly.  Originally a system of lamps and buzzers was used for signalling  but this was later changed to a telephone system where the operator could speak directly to other officials at the various destinations.

The 1961 report indicates that approximately 33,000 bags of letter and parcel mail were handled weekly between the hours of 3am and 11pm. And although the carrying capacity was 900 bags an hour, at the time of the report the system was operating at 720 bags an hour.  From the station the bags of international mail were transported to Cape Town to postal ships.

So if the tunnels were still operating in 1961 – when were they closed?