Joburg Tourism and Johannesburg In Your Pocket collaborate:  art, shopping and neighbourhood experiences in johannesburg

‘Visit Work Play’ – this message greeted us as we entered the Women’s Jail at Constitution Hill  a couple of weeks back to attend a presentation by Joburg Tourism on their new plans to market Joburg as a destination.  Jozi has traditionally received bad press internationally because of perceptions of crime and grime and, despite being the foremost business hub of the region, many see Jozi as a one-night airport stop on the way to Kruger or the Cape. 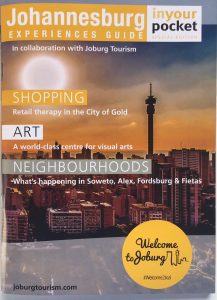 However, the fact that the city has  been named for the 4th year in a row as Africa’s most visited city in the 2016 Mastercard Global Destinations Cities Index, shows what a vibrant, energetic and desirable city it is to visit.  But we don’t want people to simply overnight on their way to Kruger Park or the Cape, or plan a 2 day cross border shopping spree … we want people to stay and play.

And this is where Joburg Tourism comes in along with their collaborator Laurice Taitz of Johannesburg In Your Pocket fame.  Joburg Tourism invited trade and travel stakeholders from around the country and the rest of Africa, to a 3 day experience of Joburg comprised of shopping, art and neighbourhood excursions.   And simultaneously they launched the Johannesburg In Your Pocket Experience Guide to these three aspects of the city.

Neighbourhoods in Joburg; shopping in Joburg

So while Soweto, Vilakazi Street and the Apartheid Museum have become signifiers of the struggle years and the rise of democracy for foreign tourists particularly, few know of the neighbourhoods of Alexandra,  Fordsburg or Fietas.   In addition to exploring these neighbourhoods,  Johannesburg In Your Pocket’s special edition, as always a  little jewel of a publication, takes visitors through a range of shopping experiences from high-end luxury to best bargains; from high street shopping to bespoke clothing;  from markets and the handmade to designer brands.

And finally the third experience (my particular passion), gives an extensive guide to Joburg as a creative and energetic artistic hub.   During the Apartheid years with the cultural boycott, the Market Theatre kept struggle politics alive in the cultural arena but it was a tough time for visual artists and musicians. Post 1994 it seems that South Africa and Joburg has been making up for the years of isolation.  Jozi particularly has made a grand entrance onto the international stage.  Recognized by the Wall Street Journal in 2014 as one of the four emerging art cities ‘you should know’, Joburg was also chosen as one of the 12 cities to be featured in Phaidon’s  2013 Art Cities of the Future: 21st Century Avant-Gardes.

Not only are there various creative hubs with art galleries and studio spaces at spots like the newly opened Keyes Art Mile; the Rosebank Art Mile in Parkwood (they still don’t seem to be quite sure of their branding);  Braamfontein; Maboneng and New Doornfontein, but there are also some excellent curated exhibition spaces like the Standard Bank Gallery, Wits Art Museum and ABSA Gallery.  There is seldom a mid-week night or a Saturday morning when there isn’t either an opening, a curator’s walkabout or an artist’s talk.  And on the first Thursday of every month these galleries stay open for afficonados and just plain jollers to gather, browse, shoot the breeze and have a drink and something to eat at one of the street stalls, restaurants or pavement cafés.  Guests arrived at Liz at Lancaster after a long plane journey (a couple of flights) from Canada and the evening they arrived went to #FirstThursday at the Keyes Art Mile.  They were completely bowled over .. Well Done Jozi – you did us proud!

And of course relatively new on the scene are the amazing art fairs: the Joburg Art Fair held in September at the Sandton Convention Centre – every gallery and creative outlet in South Africa and many from the continent are represented ; and the Turbine Art Fair in July where all works for sale come in at under R40,000 and most for way less.

For 3 months from May to July the Nirox Winter Sculpture Fair  is held out in that sublime park in the Cradle of Humankind – where cultural production and cultured nature work so exquisitely together.

However, it’s not only gallery art that Joburg has become famous for but there is also lots of public art – both works officially commissioned by the city as well as below-the-radar street art and graffiti.   Post 1994 art was seen as a way of meeting development needs and much of this was overseen by the Johannesburg Development Agency.   Despite having worked very peripherally with the JDA on various tender processes in the mid 1990s, I did not realize that a public art levy was imposed that would devote up to 1% of the construction budget on major city projects for this purpose (Johannesburg in Your Pocket Experiences Guide Special Edition p 32).

The wonderful series of wooden heads on all the bollards in Newtown bear testament to this initiative while another of  the major works to be commissioned was Clive Van Den Berg’s monumental Eland at the entrance to Braamfontein.

Street art and graffiti in Joburg

But these are all ‘official’ art projects rather than grass roots street art of which there is plenty in Joburg. In fact Jo Buitendach who made graffiti the subject of her Masters Dissertation at Wits, and who runs Past Experiences runs fascinating walking tours exploring graffiti in Maboneng and Newtown. If you join one of these tours you’ll see why Joburg is becoming known as a graffiti capital.

Every Freedom Day on 27th April there is a hip-hop festival in Newtown that celebrates street art and graffiti culture.  And in October there is the cityofgoldfestival.co.za when street artists (local and international) paint large-scale murals on the city’s walls. The results are fabulous and liven up the cityscape.

So to have the Joburg Tourism partnering with Johannesburg In Your Pocket to develop Joburg as a shopping, art and neighbourhood destination is a really exciting initiative.   Joburg Tourism asks us to say ‘Hhoyi Hhoyi’ and make a visitor’s day. That we will for sure!