Reviving the city in different ways

The collapse of inner cities is a world-wide phenomenon, as is their revival and reinvention. There are so many ways in which life has been brought back to Jozi’s inner city.  Here are some of them:

Walking tours are also part of a global phenomenon, giving a more in depth insight of specific locales in a city, as opposed to the introductory overview of a SightSeeingCity Bus tour (which I still think is a great solution if there is limited time). In a previous  blog I wrote about the wonderful #SingtheCity walking tour with Flying Cows of Jozi, a fundraiser for the Gauteng Opera.  Before setting off, we were each given a colourful bracelets as tour leader Josine Overdevest said there were at least 2 other tours in the area that morning and she didn’t want us to tag on to the wrong group.  Both Griffin Shea of Bridge Books (a little gem of an indi bookstore on Commissioner Street), as well as Gerald Garner of Joburg Places were leading tours.  Gerald, the pioneer of walking tours of Jozi inner city, has a phenomenal  knowledge of the CBD which has resulted in his publishing 2 books on the city. He has also played a central role in the development of key urban regeneration sites including The Sheds at what is now known as 1 Fox Precinct as well as Joziburg Lane at 1 Eloff Street.  He’s moved on from both these sites and has recently launched the ThunderWalk Project at Somerset House on Gandhi Square and is offering enigmatic dinners at the underground bar, Zwipi. Plus, he recently hosted a Mozambiquan beach party outside Somerset House on Gandhi  Square.   Now you have to admit these are out of the ordinary events!!   There are many walking tours which all have a slightly different focus so check their websites out: Main Street Walks; Past Experiences; Dlala Nje; JoburgHeritage; Lucille Davie Walks; and the annual Jozi Walks. They have all, in their own way, created interest in Central Jozi among both international visitors as well as locals who long fled the grit of Jozi Central for the glamour of Sandton.

Conversion of buildings for residential accommodation

Josine and many other professionals and office workers are returning to live in the inner city. She has an apartment in the Franklin building, 4 President Street (corner Diagonal street and just around the corner from 1 Fox St).  And of course, as the number of residents increases, so night life will return to the city. And the retails shops that cater to domestic furniture and accessories will return.   But it takes time.

The role of private developers

Much has been written about the way in which private developers have changed the cityscape in the last 20 years. Gerald Olitsky’s vision for Gandhi Square is but one, as is the Johannesburg Development Company’s upgrade of the Main Street Mining Mall.

Although the movement is slow, one such example is  Ornico, the media research company.  When CEO Oresto  Patricios mooted to his staff that they relocate from Morningside in Sandton to Joburg CBD, the staff, with perceptions of the inner city being crime ridden, were very resistant.  Now with hugely reduced travelling times, (plus their research having shown far lower incidence of vehicle theft in Joburg Central), staff are very happy with their move!

And while others are coming back, some never left:

In 1904 almost 64 000 Chinese labourers (mostly from the southern province of Guangdong or Canton) were brought to Johannesburg to the mines.  But by 1910 the labourers had all been repatriated, leaving just the shopkeepers operating in Chinatown along the west end of Commissioner Street.  This small Chinese community formed clubs as social hubs where members could meet and visitors could stay. One of these was the Transvaal Chinese United Club established in 1909 which became so financially successful that in 1940 they built a block of flats designed by the avant-garde German architect Wilhelm Bernard Pabst.

The Chinese school was in Ferreirastown as was the Chinese language press. The area is very run down now with only a few small grocers and restaurants, and several vacant and shuttered buildings, as the only echoes of the once vibrant community.  Chinese New Year is still celebrated here however, as well as in new Chinatown in Cyrildene.

Although a shadow of its former bustling self, Diagonal Street is still a hive of activity. Traders have been doing business here for the past three generations.  Above the shops at street level are flats which traditionally housed the shopkeepers and their families.  We met the oldest trader Ebrahim Ishmael (79) who was born round the corner in Becker Street (now Gerard Sekoto St) and moved to Diagonal Street a year later. It was here that his grandfather, then his father and then he traded over the years.

And then there is Imtiaz Limbada of Limbada & Co Bookstore at 22 Diagonal St. His grandfather, Ebrahim Adam, came to South Africa from India in 1903. In 1920, he opened the store as a “general agents and produce dealer”, according to The South African Indian Who’s Who of 1938-40. Over time  this became a news agency stocking books and stationery, including schoolbooks, many of which have been translated into several indigenous South African languages.

But not all attempts at revival are successful

There is still a terrible problem with maintenance and repairs in Joburg inner city. There is broken and uneven paving; manholes covers are missing; signs are buckled and bent; and there are pockets of litter and detritus that are really bad. 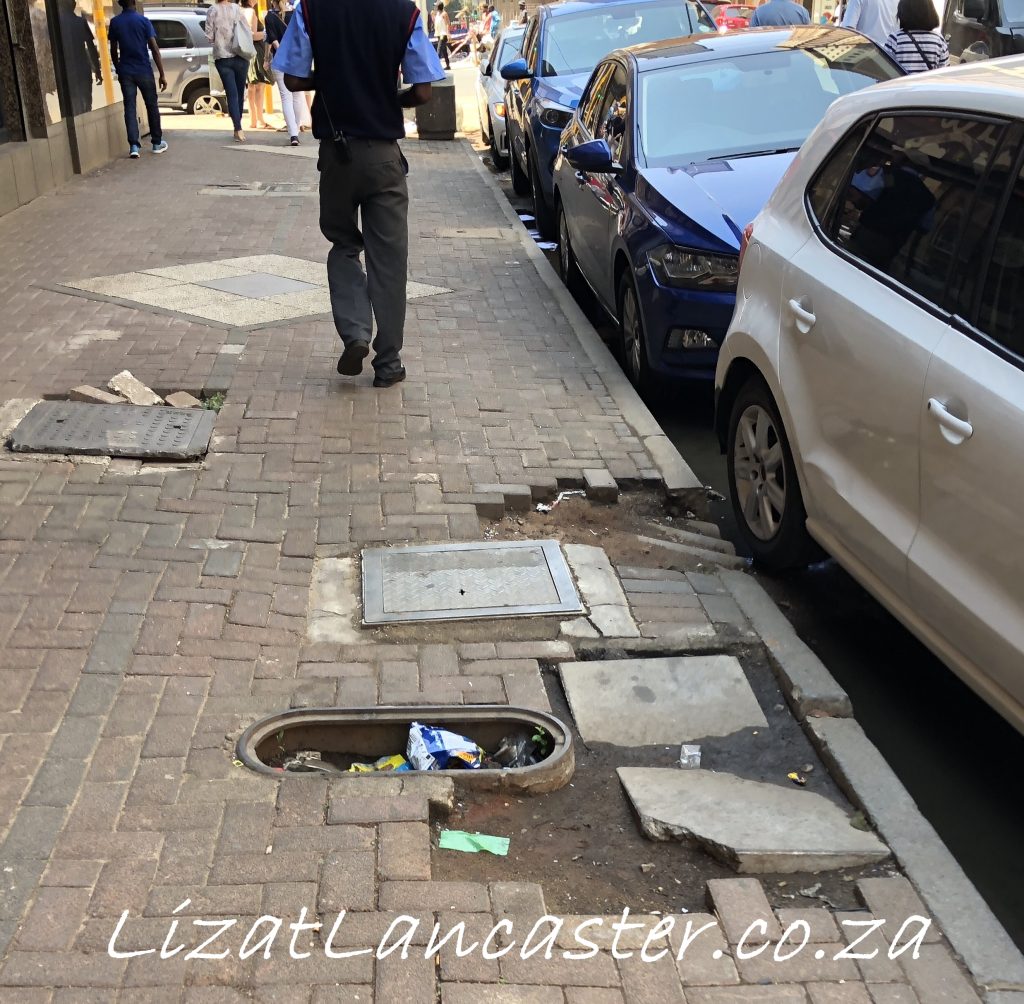 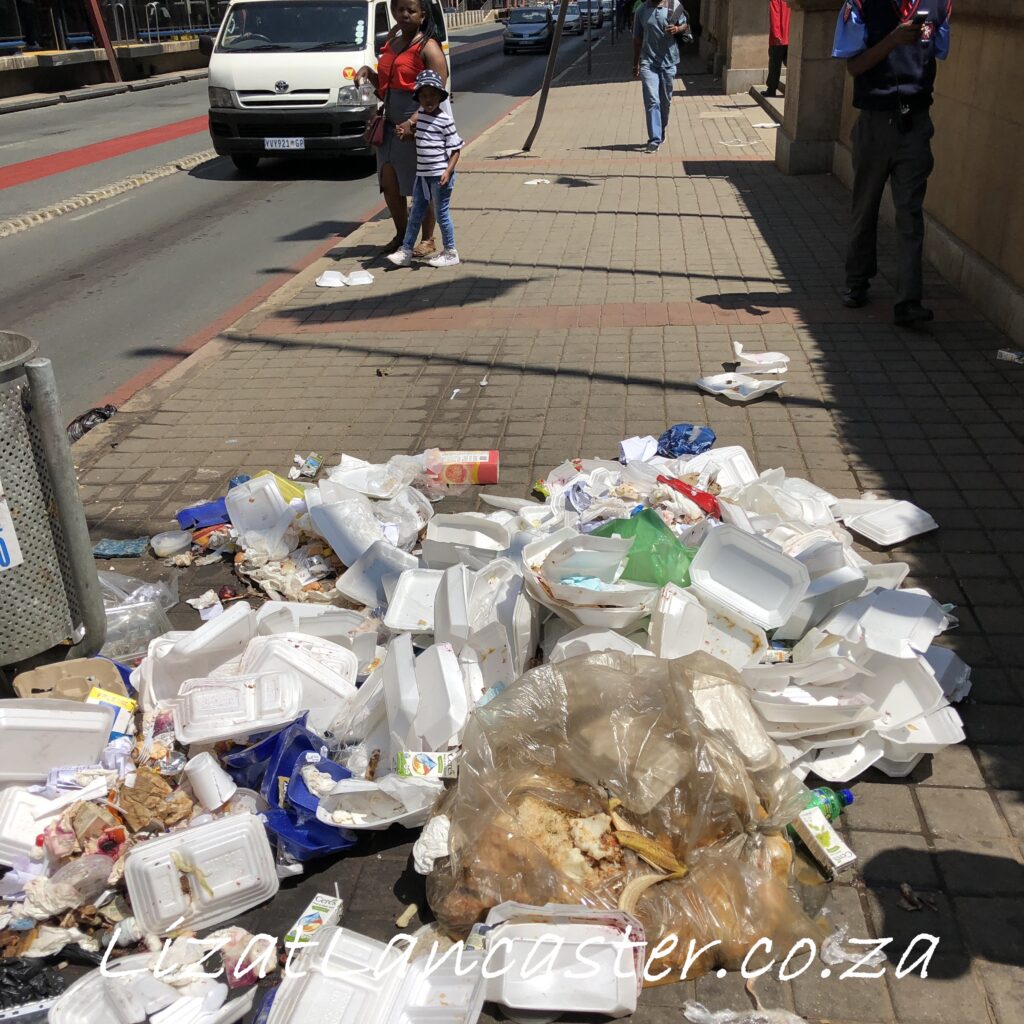 But … over-sanitized spaces don’t work either

It seems a contradiction to complain about litter and squalor on the one hand and about sanitized spaces on the other. But I think there is an in-between space of lived active spaces which still communicate pride and ownership. I have written elsewhere about sanitized spaces and how they simply don’t work.  Two of these are Mary Fitzgerald Square in Newtown (saved only by Americo Guambe’s wonderful wooden heads) and the Walter Sisulu Square of Dedication with the once thriving stalls along Union Street in Kliptown, Soweto.  I wrote of the Square of Dedication in 2001 in ‘Re-envisioning Greater Johannesburg’ (African Arts vol xxxvii no 4) that the plans for Freedom Square showed a real danger of transforming it into a purified space, one that imposes a sense of social order rather than one which allows real people to intermingle in lived spaces in a vibrant colourful workable option. And indeed what transpired was a large characterless authoritarian space which as a result is often unused, empty and soulless.  The ‘formalization of the informal sector’ simply produced a bland sameness with somewhat brut concrete architecture as opposed to human scaled higgledy-piggledness.

And this is what I fear has happened in the little passageway named Gardee’s Arcade next to the Franklin. Twelve small shops and a fruit alley were demolished to make way for the Franklin.  The fruit alley was ‘re-positioned’ and renamed Gardee’s Arcade.  Arnold Benjamin in his 1979 book Lost Johannesburg described the old fruit alley as a “charming unnamed alleyway of fruit-festooned market stalls and grocer’s shops [forming] a quiet, intimate world of its own”. This is a far cry from the current deserted and soulless passage seen below.

Give me street life and lived experience any day:

7 thoughts on “What brings people back to decaying inner cities?”