What do these countries have in common with South Africa?

……… they all have a Nando’s presence.

Recently I had a sudden urge for a side dish of Nando’s spinach (well – it’s a lot healthier than wanting their chips!). While waiting for my dose of peri-peri iron roughage –  despite that description it is quite delicious – I took in the décor of the restaurant area. Again I was struck by Nando’s fun quirky style and it got me thinking about their success story and their brilliant branding.

Nando’s is yet another SA export which has made it big world-wide with, according to Wikipedia, 1000 outlets in 30 countries.  According to Nando’s website, Melbourne is the city with the most Nando’s restaurants in the world. So Nando’s is a seriously winning formula,where South African entrepreneurship  meets consistently good quality food, art,  zappy style, and quirky irreverent humour. 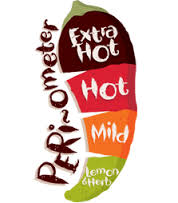 Like Sol Kerzner and Sun City but with a lot more humour and tongue-in-cheekiness, Nando’s have a founding myth based on early explorers  to South Africa (in this case the Portuguese).

‘The story of Nando’s starts hundreds of years ago with the first Portuguese explorers who set sail for the East in search of the legendary spice route.  Lured by the promises of our beautiful continent, they came ashore and there, under our famous sun, they discovered the African Bird’s Eye Chilli or as we know it (and love it), PERi-PERi. Unique in its properties, they used it to create a one-of-a-kind sauce that ignited the fires of passion inside them.  A few centuries later, in 1987, it was the same PERi-PERi sauce that inspired Fernando Duarte to invite his buddy Robbie Brozin to a small Portuguese eatery in Rosettenville, South Africa, to try some PERi-PERi marinated chicken.’

Peri Peri or piri piri – the Swahili word for pepper pepper – is a member of the Capsicum family and while it has grown wild in many parts of Africa it is now cultivated commercially in Zambia, Uganda, Malawi, and Zimbabwe. It found its way to India via Goa and the Portuguese.

While good consistent food with a winning preparation recipe is their trademark – ‘Nando’s food is love at first bite’ – the décor style of the restaurants has reinforced the brand as hot, unconventional, fun and pushing the boundaries.  You’ll find chandeliers made from recycled bottles, wall features of round seed mats, pillars clad in recycled strips of multi-coloured wood and of course the restaurants are decorated with individual art and hand-crafted items.
Rather grandiosely and not quite so tongue in cheek they claim that the 3000 pieces of South African art in Nando’s UK restaurants is about 2,500 more than Tate Britain’s total display! And that they the largest buyer of South African contemporary art in the world.  This support of local art is a great project as it gives emerging artists a leg-up and both undiscovered and established artists and craftspeople a place to display their work.

Late last year I went to the fabulous art sale at Nando’s head office (also filled with funky décor details).  150 artists were asked to create an unsigned work on a page torn from Lauren Beukes’ Broken Monsters. The funds from each work sold, went towards Book Dash. Book Dash needs to be the subject of a blog in itself: professional authors, illustrators, editors and publishers get together to donate their time and expertise and collaborate to write children’s books.   All art works (unlabelled so buyers didn’t know the ‘names’ they were purchasing) were sold for R1500 each. This raised R400,000 and enabled the printing of over 40,000 children’s books.  This is impressive.

Nando’s is known for their irreverent and controversial advertising

And perhaps most iconic of all, Nando’s has become synonymous with contentious, funny, up-to-the-minute advertising. Their campaigns have always taken a ‘no-holds-barred’ approach, poking fun at contentious subjects: remember the famous ‘tailgunner’ ad and the guide dog, so overcome by the mouthwatering smell of Nando’s chicken, that he led his charge straight into a street pole?

Of course the risqué subject of sex has been a standard favourite with the likes of ‘hot cocks’ and ‘chicks’ juices’.

Always quick to respond to current events they have produced ads within 24 hours of events happening.  On the death of North Korea’s Kim Jong II in 2011 – ‘Dear Korea it wasn’t us’ and after proposed plans for the purchase of a R4 billion presidential jet ‘JZ , We’ve got wings you don’t have to explain’.

Political figures and institutions have provided great material. In February of this year, after JZ proposed to #PayBackTheMoney they came up with ‘Quarter, half or full, Mr. President?   The 2014 ‘Fire it up’ ad is bitingly satirical of government’s blue light brigades.  In response to Eskom’s dreaded load-shedding was ‘Eish Kom Nou’ with the ‘small’ print at the bottom saying ‘When the lights go out you can still enjoy a meal in.’

And opponents in the 2010 Soccer World Cup were an obvious target. ‘Free coke for the South Americans’ and ‘To the Mexicans – Free lunch if you lose’.

Perhaps one of the most controversial, memorable and funny ads  (again on checking in 2021, this ad has also been removed from public access) was the one for the new 6-pack meal.

Gaddafi and Mugabe have a water pistol fight in a garden to the jaunty lyrics and tune of ‘Those were the days my friend’. Then the Zimbabwean dictator pairs up with Saddam Hussein and, both stripped to their underwear, they make angel wings in the sand. A giggling Mugabe pushes PW Botha (hat and all), on a swing and is then shown with Idi Amin on the back of a tank as they re-enact Kate Winslet and Leonardo DiCaprio’s  famous pose in the Titanic.  The ad ends with a solitary Mugabe, and a pay-off line referring to the famous ‘Dinner for One’ British comedy clip saying that ‘at this time of the year, no one should ever eat alone – so get Nando’s six-pack meal’. How anarchically Monty Pythonesque could you get?   Although most people found this ad extremely funny it also attracted huge criticism on the basis that it was polarizing and divisive.  Nando’s staff received threats so Nando’s  pulled the ad from being aired on television.

The You tube clip is accompanied by this note from Nando’s.

South African Nandos “Last Dictator Standing” directed by Dean Blumberg Zimbabwe dictator doesn’t approve this message, and his protectors in South Africa agreed. Apparently the fact that he is slowly starving 15 million people, caused the worst famine in Africa, and driven out of the country 6 millions Zimbabweans are not as offensive as this ad. 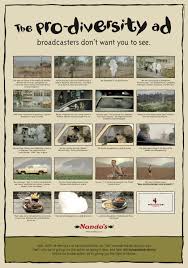 Indeed Nando’s have never steered clear of controversy and have often tackled serious issues with deep biting satire.  Their ad dealing with xenophobia  was banned by television stations. So Nando’s ran a print ad in the Sunday Times showing the storyboard of the banned TV ad with the small print at the bottom of the ad reading:  SABC, DTSV, M-Net, e.tv have banned this ad. They’ve made a decision for you.   That’s why we are giving you the option of seeing it here:bit.ly/nandosdiversity. Unlike our broadcasters we’re giving you the right to choose. 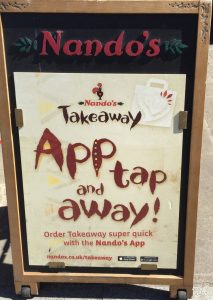 In Sawyer’s 2010 Observer article (16 May) ‘How Nando’s conquered Britain’, she writes:  ‘The brand is now inextricably linked with a certain type of youthful, racially mixed, urban British pop star and, so, with modern, inner-city, multicultural Britain.’

Nando’s near Liz at Lancaster

At Liz at Lancaster  we have had guests returning from the States, and the one of the first things they say is ‘We’ve got to get our fix of Nando’s’ .

Nando’s Parktown North 011 442 6168 is a couple of kms from Liz at Lancaster so it’s an ideal bring-home meal for those guests who don’t feel like preparing anything ‘at home’.

One thought on “What do these countries have in common with South Africa?”